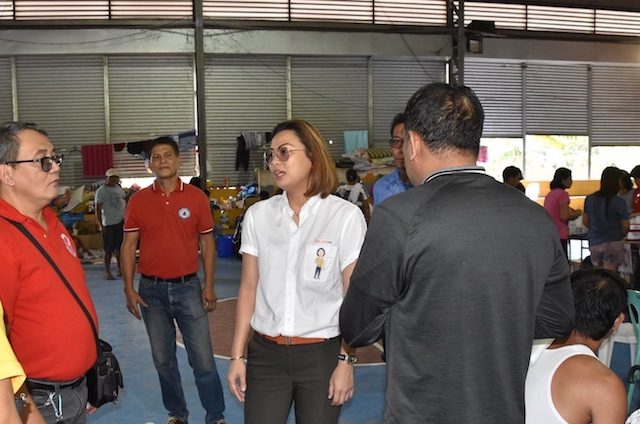 Facebook Twitter Copy URL
Copied
Mayor Joy Salvame says some evacuees have expressed their desire to resettle in Ibaan, which is a safe zone

BATANGAS CITY, Philippines – The mayor of Ibaan town in Batangas is ready to accept evacuees who wish to resettle in the municipality after being displaced by the eruption of the Taal Volcano.

Mayor Joy Salvame made the statement after some evacuees expressed their desire to move to Ibaan which is considered a safe zone.

Salvame said that she saw no problem with the entry of resettlers into her town, adding that they should also be willing to venture into agriculture, Ibaan’s main source of livelihood.

“Ang iba, nagsabi na sa amin na willing na sila tumira dito sa Ibaan. Sa sitwasyon nila kawawa talaga sila, wala kang pupuntahan (Some have told us that they are willing to resettle in Ibaan. They are in a sorry situation; they have nowhere else to go),” she saiid.

To assist evacuees who have lost their jobs and livelihood, Salvame ordered the municipal Public Employment Service Office to coordinate with local companies and organize a job fair.

“We already scheduled a PESO program for mass hiring, that’s the only thing we can do right now.  The displaced residents were given priority, even those who are not from Ibaan, so that they can already resettle,” the lady mayor said in a mix of Filipino and English.

The town of Ibaan is a 2nd class municipality with 26 barangays and a population of over 50,000 residents.  With a total land area of about 7,000 hectares, the main source of livelihood is agricultural crop production, livestock, and poultry raising.

Ibaan is currently host to over 8,000 evacuees from various municipalities within the 14-kilometer danger zone.

While Salvame said everything was under control at the moment, she was quick to admit that she could not help but feel anxious when receiving new information about the Taal Volcano.

Salvame said based on their computation, if there is a prolonged evacuation, the municipal government needs P50 million worth of rice to feed 6,000 evacuees over a 6-month period.

“That’s around P50 million for rice alone. So even just 50% of that, P25 million, where will we get that?” she said in a mix of Filipino and English.

Ibaan has a calamity fund of P10 million which Salvame is trying to keep intact for use in rehabilitation works and for other calamities that may directly affect her constituents.  She said the municipal government has been using the P 3 million-fund downloaded from the Office of the President.

She appealed to donors not to get tired of helping out, saying they need their assistance especially later on. (LIST: Relief proposals for Taal evacuees) – Rappler.com