In Talisay, desperate residents beg on the street for money, water 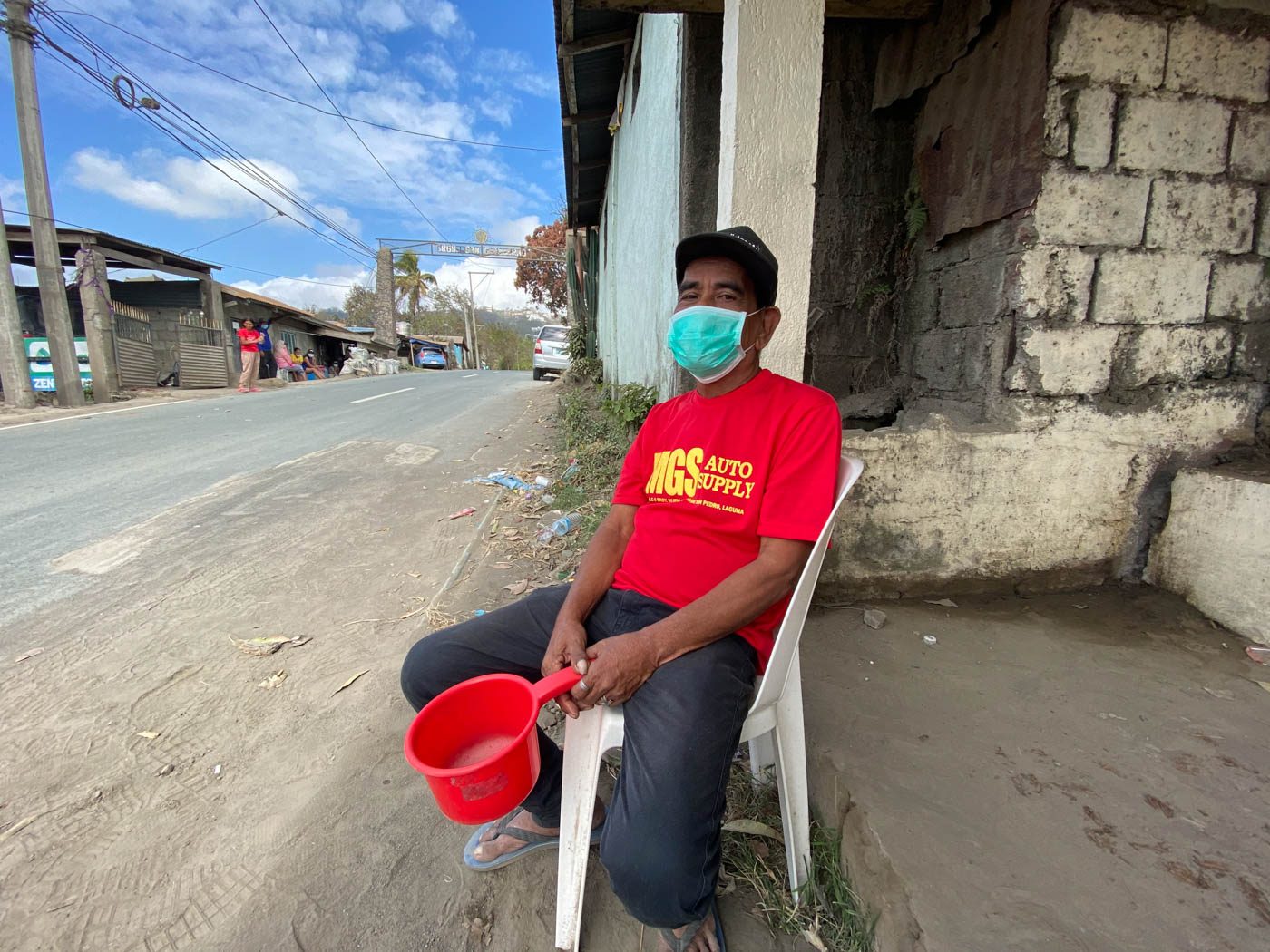 BATANGAS, Philippines – The road in Barangay San Guillermo in Talisay, Batangas still has a thick layer of volcanic ash, but 62-year-old Leoncio Seña would sit outside for hours.

In his hands was a red dipper, which he held out to any passing vehicle whose driver would be kind enough to give him a few pesos.

Seña told Rappler on Friday, January 31, that he and his family have been begging on the street for about week now. They evacuated to this barangay, where one of his in-laws lives, after fleeing their lakeside home in Talisay when Taal Volcano began erupting.

(We don’t have any finances. We need it especially now that two of my grandchildren are sick. But we don’t have any money. We can’t send them to the hospital. We’re now hoping someone would donate to us.)

Those who would stop for Seña tend to only give coins or small bills. (READ: Taal Volcano evacuees appeal: ‘We need cash aid’)

He said the evacuees here would pool together the little amount they collected at the end of the day, then divide it among themselves to buy food. Others use the money for their transportation fare to visit individuals or offices where they could ask for more cash or relief goods.

(It’s not much, just a few coins. Some give P5. They don’t give a lot. But we’re still thankful.) 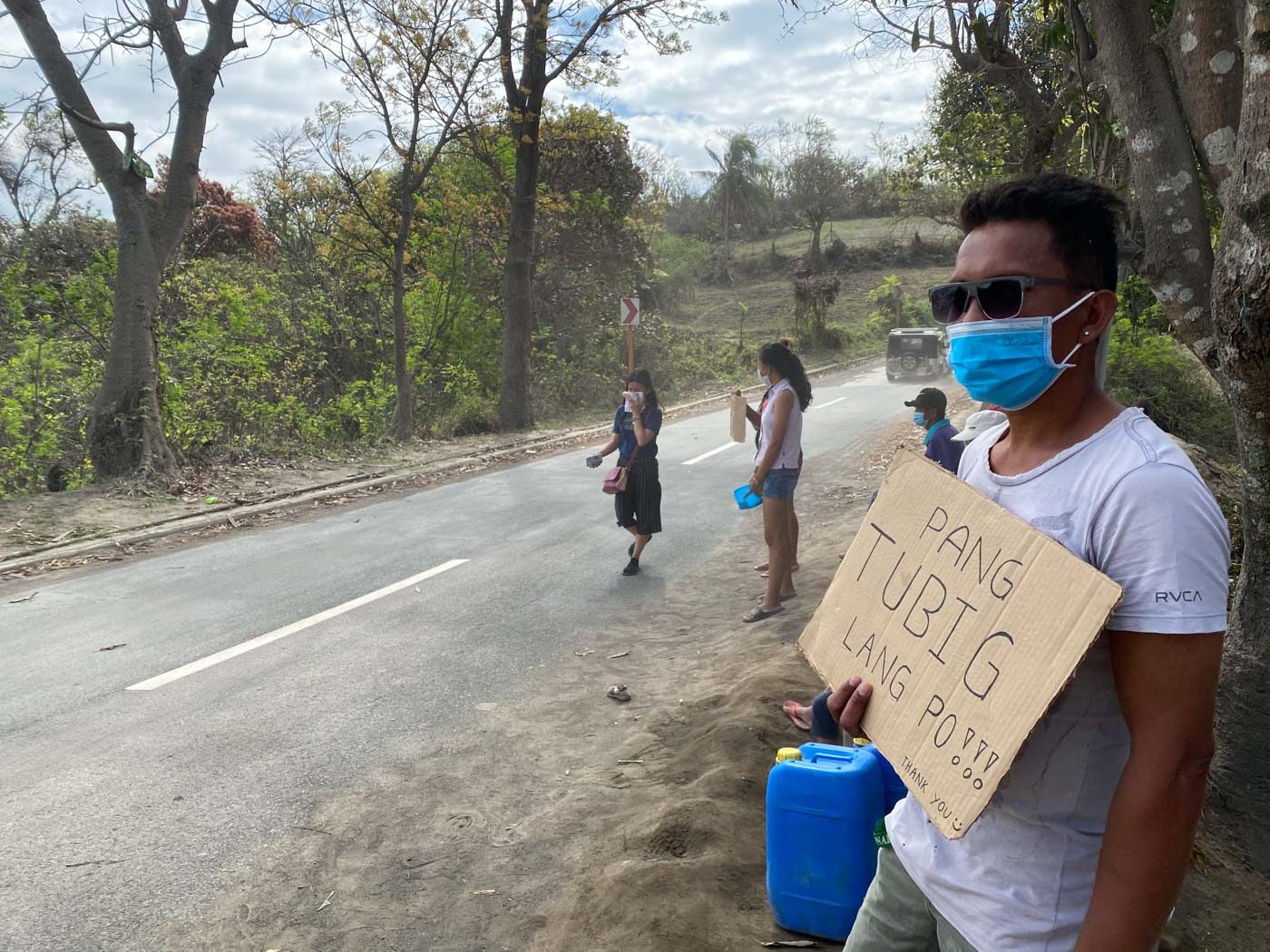 Several meters from Seña’s monobloc chair was Marlon Rosima, who was holding up a cardboard sign that read, “Pang-tubig lang po (Just for water)! Thank you!”

The 36-year-old resident said it’s been 3 months since their village lost their water supply, the lack of access compounded by Taal’s eruption.

(Even before the volcano erupted, we really did not have water anymore. It’s been 3 months. That’s why our lament here is that water is what we really need here.)

Some drivers would open their windows and give them bottles of drinking water. But this meager supply is not enough for bathing as well as washing their clothes and cookware.

Rosima said they do have the option to buy water in Tagaytay, but it costs them P750 for every 5 drums.

Rosima used to be a construction worker before Taal’s eruption. He has yet to find alternative work.

Where is the Talisay government?

Sought for comment, Talisay Mayor Gerry Natanauan said they cannot just stop residents from begging. He then said there is no shortage of help arriving in Barangay San Guillermo anyway.

(As far as I know, there’s no lack of help reaching them. Because first of all, outsiders who send help would pass by them. I’ve seen for myself how they would line up and receive the aid.)

He acknowledged the flow of water in the village has been weak, a longtime problem in San Guillermo since its supply is sourced upland in Tagaytay.

(They never run out of supply. There’s always a supply there. They wouldn’t be alive if there’s no water. They have water. They’re just saying they don’t. Even if the flow is weak, they still have somewhere else to source water from.) The Talisay municipal government already had plans to augment the water supply in Barangay San Guillermo, but this was disrupted when Taal Volcano erupted.

(We’re still fixing it. Of course you can’t just rush that. First of all, it’s hard to determine which to attend to first. But we’re prioritizing that.)

For now, Natanauan said residents who want to avail of the province’s cash-for-work program should go to his municipal office, about 5 kilometers away from the homes of Seña and Rosima in San Guillermo. Every participant will get P400 a day for helping clean ash from the streets.

The mayor said Talisay has already received P5-million worth of aid from the national government. Other local government units have been sending cash and relief goods as well, including Bulacan and Nueva Ecija.

Alert Level 3 is currently raised over Taal Volcano, whose initial eruption affected at least 125,614 families or 467,890 persons in Batangas, Quezon, Laguna, and Cavite. About 18,226 families or 63,574 persons remain in evacuation centers.