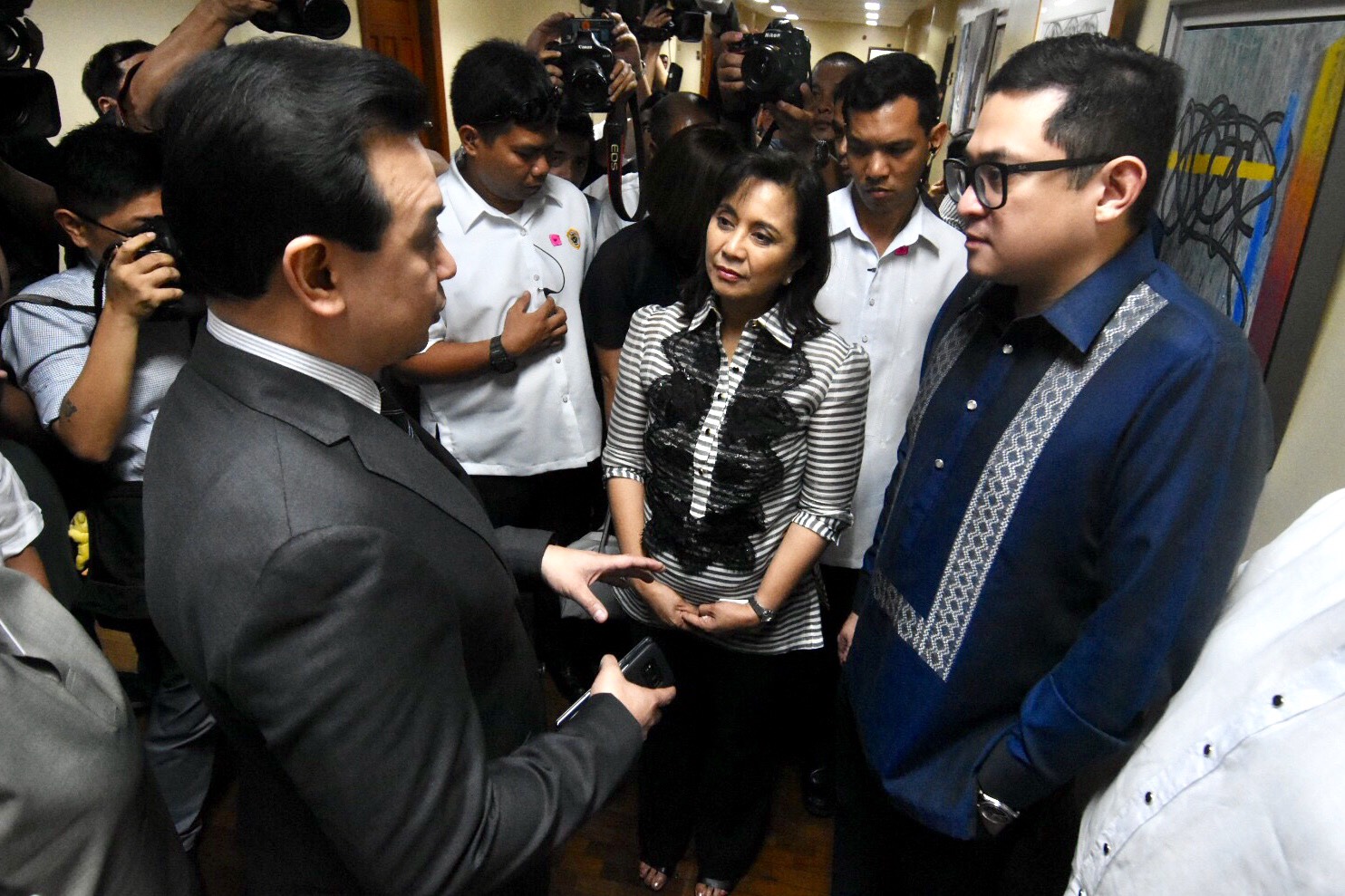 “The panel explained that [there] were interlocking pieces of proof [that] provide a complete picture of the grand conspiracy between and among some respondents to create hatred or revenge against the President and his family with the end view of toppling and destabilizing the current administration,” said Perete in a statement on Monday.

Peter Joemel Advincula alias “Bikoy” was also indicted for conspiracy to commit sedition, despite his being the primary witness of the complainant, the Philippine National Police-Criminal Investigation Detection Group.

Aside from Trillanes and Advincula, the others charged for violation of Article 141 of the Revised Penal Code are Jonnell Sangalang, Yoly Villanueva Ong, Vicente Romano, JM Saracho, Boom Enriquez, and a certain “Monique.” They were accused of producing the “Bikoy” videos.

Also charged are priests Flaviano Villanueva and Albert Alejo, who Advincula said assisted him throughout the so-called project.

All complaints against human rights lawyers, bishops, and members of the Integrated Bar of the Philippines were also dropped.

In a statement, Robredo’s spokesman Barry Gutierrez said the DOJ resolution was “a definitive condemnation of the fabricated accusations and trumped-up charges brought against [the Vice President].”

He added it “stands as vindication of what she has maintained from the start: that the ‘charges’ were never anything more than lies and political harassment.”

Perete said the DOJ panel relied on the following elements to charge Trillanes and others with conspiracy to commit sedition:

Perete said the panel also took into consideration keys, access cards, bills, and receipts for the transactions and purchases allegedly made during the production of the “Bikoy” videos.

“These pieces of evidence, along with certain admissions made by some respondents, were used by the panel in arriving at their conclusion to indict the 11 respondents for conspiracy to commit sedition,” he said.

But Perete said complaints for sedition, inciting to sedition, cyber libel, libel, estafa, and obstruction of justice were dismissed against all respondents.

“In finding no probable cause for sedition or inciting to sedition, the panel found the element of public and tumultuous uprising wanting,” he said.

The charges have been filed before the Quezon City Regional Trial Court. Prosecutors recommended bail at P10,000 each. The judge will now determine if there is probable cause to issue a warrant of arrest.

In case of a warrant, it would be the 8th warrant against Trillanes under the administration of President Rodrigo Duterte.

Conspiracy to commit sedition is a bailable offense.

This is Trillanes’ 3rd sedition case under the Duterte administration. The first two cases were for inciting to sedition filed before Pasay City courts, one over a privilege speech in the Senate about Duterte’s wealth, and the second over a media interview about the President in relation to the grant of amnesty to the former senator.

Trillanes awaits the DOJ’s resolution for another complaint of kidnapping filed against him by a Davao-based businesswoman who accused the former senator of keeping her in a convent and forcing her to sign a damaging affidavit against Duterte.

Advincula accused members of the opposition, as well as ranking figures in the Catholic Church and human rights lawyers, of conspiring to oust Duterte through what he claimed was an operation code-named Project Sodoma, which involved producing and releasing the narcolist videos.

The videos, which Advincula narrated, accused Duterte and people close to him of being linked to the drug trade. But Advincula later retracted the claims made in the video and accused the opposition of being behind them.

Robredo was accused of participating in a Project Sodoma meeting supposedly held at the Ateneo de Manila University campus in Quezon City on March 4, 2019, but the Vice President submitted proof she was at a public event in Bulacan that day.

Robredo had slammed the complaint as Solicitor General Jose Calida’s attempt to indict her to lay the groundwork for an ouster that would favor defeated vice presidential candidate Bongbong Marcos. Marcos filed an electoral protest against Robredo over the latter’s victory in the May 2016 polls. – Rappler.com