May 30, 2020 11:16 PM PHT
Lian Buan
Facebook Twitter Copy URL
Copied
The bill would empower a council of top cabinet officials to do functions usually reserved for the courts, like ordering the warrantless arrest and detention of people and groups perceived to be terrorists 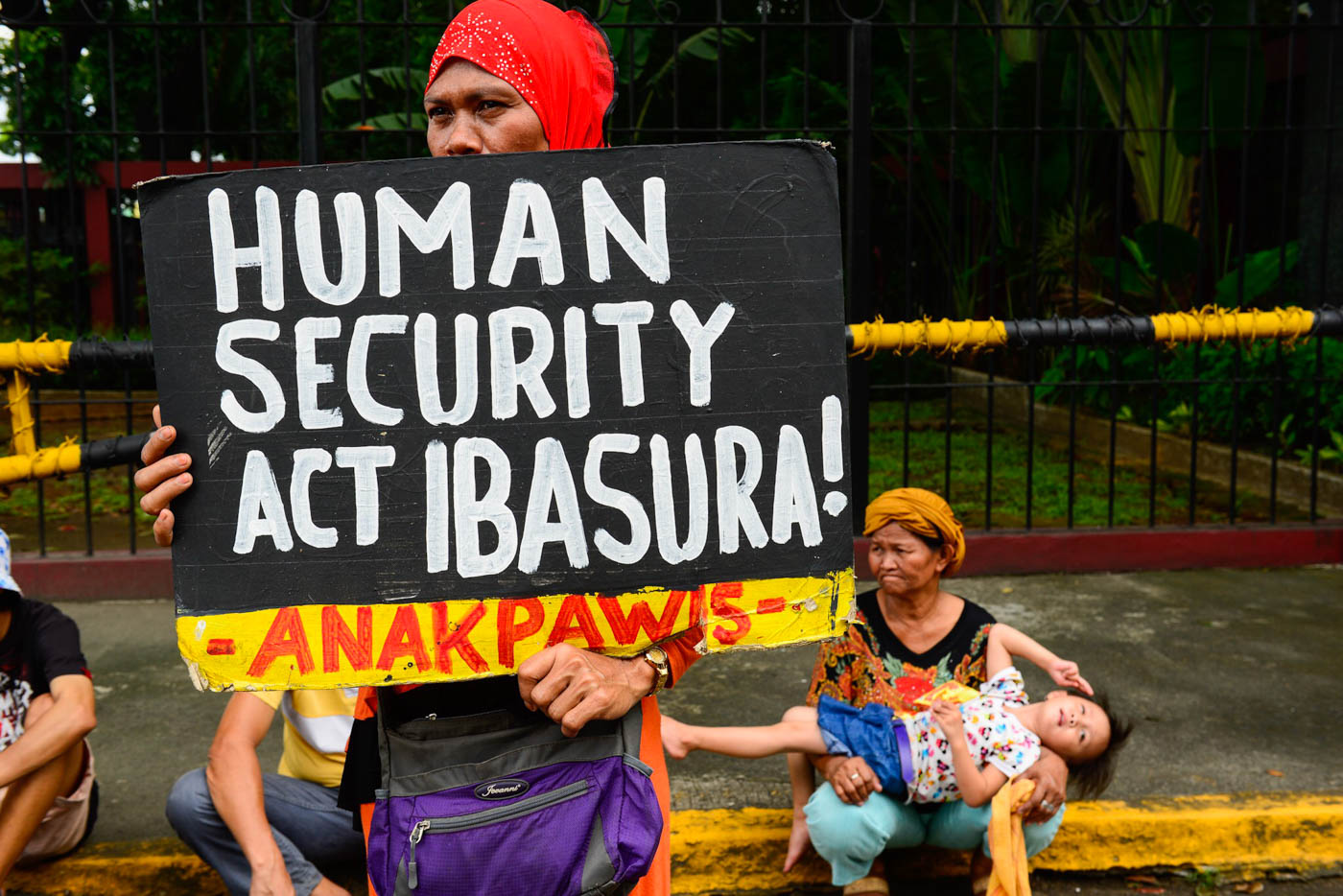 MANILA, Philippines – Civic groups and lawyers raised the alarm that some provisions of the toughened Philippine Anti-Terror Bill or Senate Bill 1083 would trample on fundamental freedoms of expression and liberty.

Statements of condemnation poured in Saturday, May 30, as the bill was expected to be tackled in plenary debates at the House of Representatives. The House committee on public order and safety just adopted the Senate version, worrying civil libertarians of a possible railroading of the bill in Congress.

“From my analysis of Senate Bill No. 1083, we should be worried because the moves in Congress to railroad a new Anti-Terrorism law endanger our basic rights and freedoms,” said human rights lawyer Chel Diokno, chairman of the Free Legal Assistance Group (FLAG).

What’s wrong with it?

SB 1083 is packaged as a bill that would strengthen systems to fight and catch terrorists, however there are provisions that lawyers said would authorize the government to arrest and detain anyone who expresses dissent to government.

For starters, the bill would allow the Anti-Terror Council (ATC), made up of top cabinet officials, to do functions otherwise reserved for courts,  like ordering the arrests of people it has designated to be terrorists.

Section 29 empowers any law enforcement agent to arrest and detain without warrant – as long as authorized by the ATC – “a person suspected of committing any of the acts” punished by the bill.

The bill even exempts the law enforcement agent from liability under Article 125 of the Revised Penal Code. Article 125 punishes law enforcement if it unduly detains a person, or fails to bring an arrested person to the court within prescribed time; 12, 18 or 36 hours depending on the offense.

Diokno calls the ATC power an “executive warrant which is not allowed by the Constitution.”

“It also gives law enforcers a blanket license to make warrantless arrests even when the grounds therefor are not present. SB 1083 allows the prolonged detention without charges of ‘suspected terrorists’ for up to 24 days,” Diokno said.

Section 25 of SB 1083 would also empowers the ATC to “designate” people or groups which it deems to be involved in terror acts. Those designated would be subject to sanctions by the Anti-Money Laundering Council (AMLC) such as freezing of assets.

Again, Diokno said this should be a power of the courts, and not executive officials.

Previously, the Duterte government tried to tag through the courts more than 200 people as terrorists, including a United Nations Special Rapporteur. Malacañang has also lumped human rights lawyers and journalists with communist rebels in what it called the Oust Duterte matrix.

SB 1083 would also create a new crime: inciting to terrorism which is defined under Section 9 as “any person who, without taking any direct part in the commission of terrorism, shall incite others to the execution of any of the acts specified in Section 4 hereof by means of speeches, proclamations, writings, emblems, banners or other 4 representations tending to the same end.”

Diokno compared inciting to terrorism to the existing crime of inciting to sedition, which has been used to charge teachers who posted critical content against Duterte on their social media pages.

The Philippine police has also tried but failed to charge Vice President Leni Robredo of inciting to sedition. They have successfully charged opposition figure Antonio Trillanes IV of the offense, adding up to the piles of cases he has faced under the administration. None has jailed Trillanes so far.

Diokno, who was also a respondent of the same complaint but who has since been cleared, said: “These crimes, however, are susceptible of broad application and can be used to stifle speech protected by the Constitution and to go after critics of the administration.”

Progressive groups have started to use the #JunkTerrorBill hashtag, especially after an incident on May 28 where urban poor leader Carlito Badion was found dead in in Barangay Guintigui-an, Ormoc City in Leyte .

The group COURAGE said Badion’s “body was burned and bore signs of torture.”

Bayan Muna Representative Ferdinand Gaite linked Badion’s murder to SB 1083, saying it is the peasant leaders and activists like him who are the real targets of the bill.

“To all my colleagues in the House of Representatives, remember the name Carlito Badion. Murdered on May 28 for wanting nothing else but social justice, equal rights, and dignity for the urban poor. Before his murder, he was red-tagged, labeled as an enemy of the state. Remember his name,” said Gaite.

“Let’s make sure this public health crisis is not being used as cover to railroad measures that would hurt our fellow Filipinos.” Diokno said.

Olalia said if passed into law, SB 183 would “be the manual for an omnipotent Big Brother in a police State.”