Facebook Twitter Copy URL
Copied
If the PMA 'is in danger of running afoul of the human rights norm if it fails or refuses to rectify the grievous harm done by the Honor Committee against the Cadet Cudia,' the CHR says

MANILA, Philippines – The Commission on Human Rights (CHR) on Wednesday, April 30, said the Honor Committee of the Philippine Military Academy (PMA) deprived cadet Aldrin Jeff Cudia of his rights by holding a “sham trial” and convicting him “for an offense he did not commit.”

Among the new details of the case that the human rights body found were:

The CHR said the Honor Committee, composed of cadets, disregarded rules and due process by conducting a second voting to change the initial 8-1 decision on Cudia. According to the academy’s Honor Code, a guilty verdict on a cadet can only be pronounced if there is a unanimous vote of 9 by 9 voting members.

The Honor Committee members investigated by the CHR insisted that when a voting result is 7-2 or 8-1, it is the PMA’s practice to call the members to a secret room or chamber. But the report said there is no provision that if the result is not unanimous, there should be “chambering” or another set of voting.

According to CHR director Flora Atilano, the second voting was held to pressure Cadet Dalton Lagura – who initially voted against Cudia’s dismissal – to change his vote.

“Even granting that there can be a second voting, the secrecy of the ballot was violated because Cadet Lagura accomplished and submitted his second ballot sheet, for his guilty vote, the following day,” the report said.

Lagura admitted to the CHR that he accomplished his second ballot in his barracks, not in the chamber. He also said that he requested his underclass to submit the ballot, without him verifying if his vote was actually submitted to the committee.

Despite this, the announcement of the 9-0 verdict was made immediately after the committee members left the chamber.

“The Honor Committee proceeding, particularly the voting process, was a sham trial. Without a doubt, there was only one voting conducted which yielded an 8-1 vote, as announced by the Committee,” CHR Chair Loretta Rosales said. Cadet Cudia’s misfortunes began on November 14, 2013, when he was two minutes late for his 3 pm English class because he said they were “dismissed a little bit late in a previous class.”

His tactical officer Major Dennis Hindang filed an honor violation against him on January 7, 2014, for “giving a statement that perverts the truth in his written appeal.” (READ: Did PMA cadet Cudia lie? Document shows details)

The case was investigated by the PMA’s Honor Committee. In February 2014, he was dismissed from the academy for violating the Honor Code, which states cadets “do not lie, cheat, steal or tolerate those among them who do so.”

Cudia was expected to “honorably resign,” but his family chose to fight back. This led to the investigation of the CHR and, on February 21, PMA cadets were ordered by the Cadet Corps to ostracize Cudia.

According to the CHR, Cudia did not violate the honor code because he did not intend to deceive or mislead his peers and superiors. Atilano said that it is the Honor Committee, instead, who violated the honor code.

In the minutes of the first voting, there was deliberate omission of substantial portions of the proceedings, particularly in the discussion and pronouncement of the voting result. “The minutes were tampered, inaccurate, and incomplete. The two recorders, the presiding officer, and the chair signed the minutes,” Atilano added.

The CHR report also said that the order to ostracize Cudia is a human rights violation since it is “tantamount to expulsion or exclusion from a particular community which transgresses the right to dignity and directly affects the right to life of a person.”

Another violation was committed against Cudia’s right to private communication, the CHR said. A recording device was discovered by the cadet taped in the wall of the room directly adjacent to his room in the PMA holding center. This room was where his relatives and officials from the Public Attorney’s Office and CHR visited and conferred with Cudia.

The CHR report suggested that some of the Honor Committee members had vested interest in Cudia’s case. Cudia, who would’ve have graduated salutatorian of the Siklab Diwa Class of 2014, was also top of the Navy Class.

Cadet first class Noel Raguindin, who was part of the Honor Committee investigation team, ranked second to Cudia in the Navy Class. Despite this, he did not inhibit from taking part in the preliminary investigation. The committee did nont see it appropriate for Raguindin to inhibit even for delicadeza either, the CHR report said.

The committee’s chair, Cadet first class Mike Mogol, had also previously attempted to expel Cudia by reporting him and his classmates for an honor violation. They were declared not guilty “but one thing is clear, Mogol was in bad faith and determined to destroy Cudia, for his own reasons,” the report stated. (READ: PMA: Cudia charged 3 times with honor violation)

Cudia’s sister, in earlier reports, also said that the cadet was supposedly in a bad relationship with his tactical officer Major Hindang, who filed the honor report against him. The tactical officer acts like a father to the cadets. He is tasked to monitor the daily activities of cadets under him and gives them their grade for Conduct.

“The tactical officer is very strict, giving my brother low grades because he asks a lot of questions in class. He’s always been like that since he was a kid. Is it bad to ask questions?” Annavee Cudia said in a Facebook post that was already deleted. 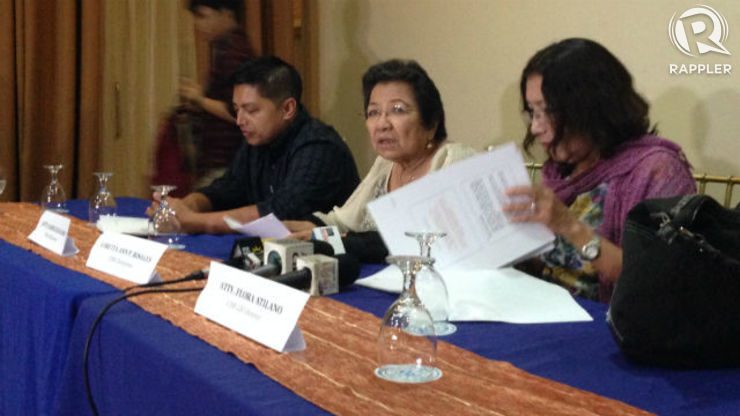 Rosales added that it was Major Hindang who ascribed malice to Cudia’s statement by substituting his own bias to the explanations provided by Miss Costales. Costales was the professor who issued an affidavit acknowledging that she indeed dismissed Cudia’s class late before his English class.

“Clearly then, it was the Honor Committee and Major Hindang that violated the Honor Code of the PMA,” Rosales added.

‘They took away his future’

Rosales said the Honor Committee violated Cudia’s rights to due process, guaranteed by both international human rights laws and our own Constitution, and his right to education by not allowing him to graduate.

“What is it that the PMA Honor Committee deprived Cadet Cudia of? To put simply, they took away his future,” Rosales said.

Citing the report’s recommendations, Rosales said the PMA and the Honor Committee must respect the 8-1 not guilty vote in favor of Cudia, thereby making him a full-fledged graduate and alumnus of the academy.

“The PMA authorities concerned must issue to Cadet Cudia the corresponding diploma for the degree bachelor of science and his official transcript of academic records for his BS degree without conditions as to his status as a PMA cadet,” Rosales added.

The CHR said it will further study the possible filing of administrative, criminal and civil suits against the Honor Committee officers, its members, and Major Hindang.

Although the CHR has no power to force the institutions involved to follow their recommendations, Rosales said her office will file a resolution to compel other government offices to act.

CHR’s investigation will also be taken into consideration in the case that the Cudias filed before the Supreme Court and the case they will file in the office of the Ombudsman for military and other law enforcers.

“PMA, as a state-run educational institution, is in danger of running afoul of the human rights norm if it fails or refuses to rectify the grievous harm done by the Honor Committee against the Cadet Cudia,” Rosales said.

She called on President Benigno Aquino III and Defense Secretary Voltaire Gazmin to take all possible steps to see that the PMA system is reformed. “The credibility of the Armed Forces and the success of its transformation program hangs on the balance,” Rosales added.

What’s next for Cudia?

Cudia refused to comment on the CHR’s investigation. But his father, Renato Cudia, said the family feels vindicated because of the report.

Renato said the family no longer wants Jeff to join the military.

(Given what happened, any parent would not want their son to go back to an institution like that. I’ve been to the PMA. That’s why I’m afraid of sending him back there.)

Renato Cudia said his son feels convicted to pursue law, after all that he had been through.