May 20, 2014 10:53 PM PHT
Angela Casauay
Facebook Twitter Copy URL
Copied
Some lawmakers however believe the Freedom of Information bill must be passed first 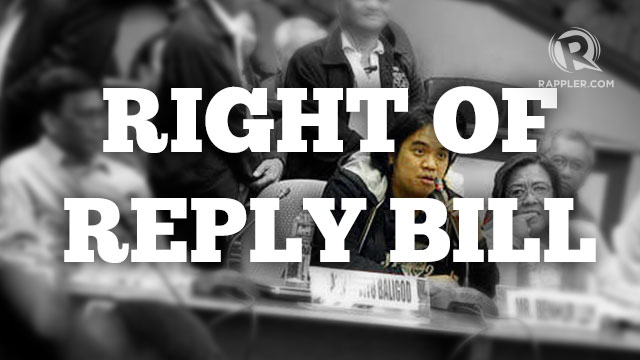 MANILA, Philippines – Lawmakers tagged in the accounting records of principal whistleblower Benhur Luy as having allegedly benefitted from the pork barrel scam decried their inclusion in the list and slammed a newspaper report for failing to include their sides. On Tuesday, May 20, they renewed calls for the passage of the right of reply (ROR) bill.

Aggabao said an ROR law would provide those who have been the subject of news reports a “mechanism” to clear their names.

The ROR bill requires media outfits to publish or air the side of the subjects of news reports that are critical of these subjects.

Lawmakers in previous congresses had moved to include a right of reply provision in the yet-to-be-passed Freedom of Information (FOI) bill. But FOI advocates have branded it as a “killer provision” that impinges on the right to freedom of expression. Some lawmakers have also tagged it unconstitutional.

(What hurts is they texted me for my reaction, and in my reaction I said I had no trasactions there and none of my PDAF went there. They released all the denials of other congressmen, but they did not accord me with the courtesy of printing my response to their query.)

In a series of reports, the Inquirer released the list of personalities, including lawmakers and members of the media, who were alleged conduits in the pork barrel scam as shown in the broadsheet’s copy of Luy’s hard drive. Luy’s camp, however, has distanced itself from the list.

At least 3 journalists included in the list have denied involvement in the scam and slammed the Inquirer for what they said was the irresponsible publication of unverified information.

Some lawmakers, meanwhile, said the FOI bill, which has been pending in Congress for over two decades, must be passed before ROR.

“Bitin na bitin na ‘yun. Pag nilagyan mo na naman ng added issue ‘yan, eh baka good for the next Congress na yan. (That’s long been pending. If you insert an added issue, it might be good for next Congress already.) We cannot afford that. We need to pass the FOI bill into law,” Buhay party-list Representative Lito Atienza said in a separate press conference.

The FOI bill has been passed on 3rd and final reading in the Senate. Meanwhile, the technical working group of the House comittee on public information has yet to finish consolidating various versions of the bill.

Debates on the right of reply provision was one of the factors that stalled discussions on FOI in past Congresses.

“Let me pass on the issue, can the media somehow do something to exercise caution, to exercise responsible journalism so this does not get worse? The government can’t do this alone. I think this should be a concerted effort of each one of us as Filipinos,” Umali said.

In the aftermath of the Inquirer report, the National Union of Journalists of the Philippines issued a statement urging fellow members of the media to address corruption within their ranks.  – Rappler.com