Facebook Twitter Copy URL
Copied
The move involves a total of 446 troops consisting of 115 Philippine Air Force personnel deployed to Liberia in July 2012, and 331 troops deployed to Golan in November 2012

MANILA, Philippines (UPDATED) – The Philippines is pulling out hundreds of soldiers supporting United Nations (UN) peacekeeping missions in Liberia and Syria following a series of discussions on health and security threats, respectively, in these 2 countries.

“Amidst the volatile security environment in the Middle East and North African region, the Philippines prioritizes the safety and security of its troops, but remains committed to the peacekeeping missions of the United Nations,” the defense department announced on Saturday, August 23.

The decision involves a total of 446 troops consisting of 115 Philippine Air Force personnel deployed to Liberia in July 2012, and 331 troops deployed to Golan Heights in November 2012.

The withdrawal of Philippines troops in Liberia has become a priority as the death toll due to Ebola has risen to 1,350 in the region. Liberia is one of 3 countries suffering from an Ebola outbreak. (READ: Liberia continues hunt for Ebola patients)

“In light of the rising health risk posed by the outbreak of Ebola virus in Africa, the Filipino troops deployed to the UN Mission in Liberia will also be repatriated as soon as possible,” the defense department said in a statement.

Three countries in Africa – Guinea, Liberia and Sierra Leone – are suffering from an  Ebola outbreak, prompting neighbors to clamp down shared borders because of fears of a possible flare-up. 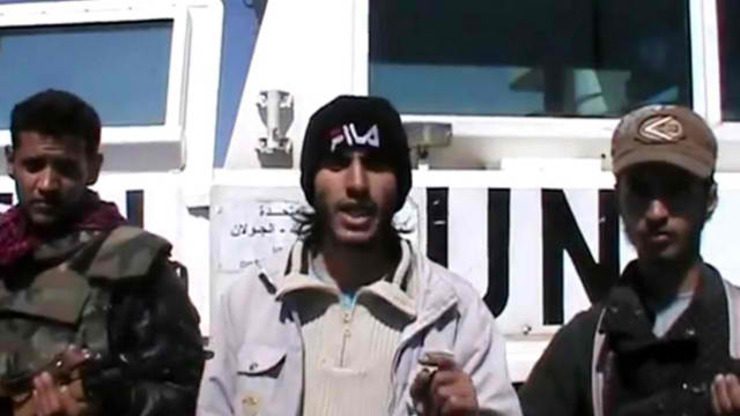 Troops in Golan Heights, on the other hand, will return – as scheduled – when their tour of duty ends in October. The Philippines will not be replacing the troops.

Golan Heights straddles the borders of warring Syria and Israel. The Philippines sustained its troops in Golan Heights inspite of kidnapping incidents in the past and withdrawal of other troop-contributing countries.

New security assessments prompted the Philippines to stop the deployment there.

‘No redeployment until situation improves’

DND spokesman Peter Paul Galvez said the Philippines would not send back its troops to the Golan Heights “unless the situation improves.”

He expressed confidence the pullout would not hurt the country’s standing with the UN, recalling that Filipino troops had remained in Golan Heights in 2013 even after Australian, Croatian and Japanese peacekeepers had been withdrawn.

“However the situation has become more volatile with increased security risk, hence the recommendation and subsequent approval for repatriation,” he said in a statement to Agence France-Presse.

Galvez also said that the Filipinos from Liberia would be quarantined for at least 21 days after arriving to ensure they are not infected.

The Philippines started deploying its peacekeepers to to Liberia in 2003 to support UN missions.

Deployment to Golan Heights only started in 2009. The Philippine troops were deployed to “maintain the ceasefire and supervise the agreement and protocal with regard to the area of separation and area of limitation.”

Last year, the Philippines also considered pulling out its Golan peacekeepers after 25 of them were kidnapped but later freed by Syrian rebels in two separate incidents.

A Filipino soldier was also wounded by a wayward shell last year.

President Benigno Aquino III later agreed to a UN request to keep the Filipinos in the Golan after receiving pledges that they would be given more equipment to protect themselves.

There are a total of 633 troops currently deployed as United Nations peacekeepers in 9 mission areas including Haiti, India and Pakistan, Sudan, Timor-Leste, and Ivory Coast.  – with reports from Agence France-Presse/Rappler.com