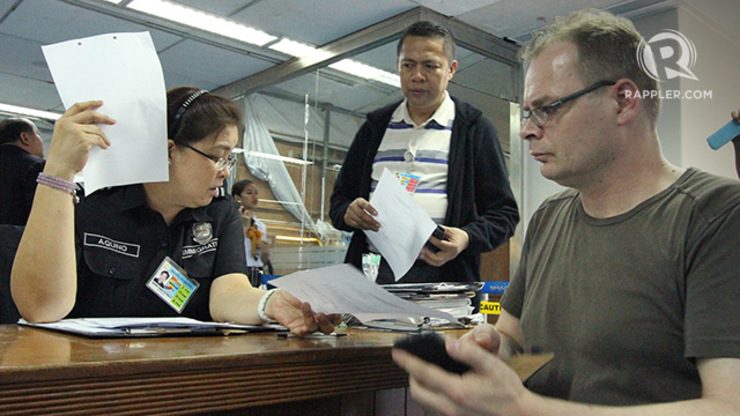 Facebook Twitter Copy URL
Copied
Marc Sueselbeck has been charged with 'undesirability' by the Bureau of Immigration, according to Justice Secretary Leila de Lima

MANILA, Philippines (3rd UPDATE) – The Bureau of Immigration (BI) has put on its watch list the German boyfriend of slain transgender Filipino woman Jennifer Laude and stopped him from leaving the country.

Marc Sueselbeck was scheduled to leave Manila at 630 pm Sunday via Malaysian Airlines, according to the Laude family’s lawyer Harry Roque.

At around 5:20 pm, the BI said Sueselbeck “attempted to leave tonight.” But the bureau said: “His departure was deferred due to a pending deportation case for undesirability. A copy of the charge sheet was provided to him. He was told to report to Legal of BI tomorrow.”

In an earlier text message to reporters, Justice Secretary Leila de Lima said the Bureau of Immigration has already filed charges of “undesirability” against both Sueselbeck and murder suspect US Marine Private First Class Joseph Scott Pemberton. Both are therefore not allowed to leave the Philippines, according to De Lima.

Sueselbeck is “now in BI watchlist,” De Lima said. “He will not be arrested, but he will be given copy of the charge sheet and will be prevented from leaving on account of such charge.”

Sueselbeck was charged with “undesirability” after he entered Camp Aguinaldo’s premises on October 22 during a protest and confronted a soldier who tried to prevent him and Laude’s sister Marilou from entering the camp. (READ: Jennifer Laude’s fiancé, sister climb camp’s gates). The military denounced his actions.

On Sunday, Sueselbeck apologized for his behavior.

In a “departure statement” posted online by Roque, Sueselbeck said: “I extend my sincere apology for the incident that happened at Camp Aguinaldo on 22 October 2014. I regret that my action appeared as if I was disrespecting Philippine authorities, especially the Armed Forces of the Philippines. That was not my intention,” he said.

“I understand I was perceived by Philippine military officials as having pushed a soldier in a violent manner. It certainly was not an assault. I could not immediately stop my forward movement but video footage from any of the media covering that event can prove that I never aggressively attacked any soldier. I merely wanted to reach Marilou, make sure she was safe, and join her in asking questions. I believe that if I were truly aggressive and posed a true threat, the soldiers would not have hesitated to forcefully stop me. I heard the soldiers say that we “could get arrested for being on that ground.” I was able to reach Marilou and we left the area together,” he added.

Sueselbeck has said he and Laude were supposed to get married soon. – Rappler.com