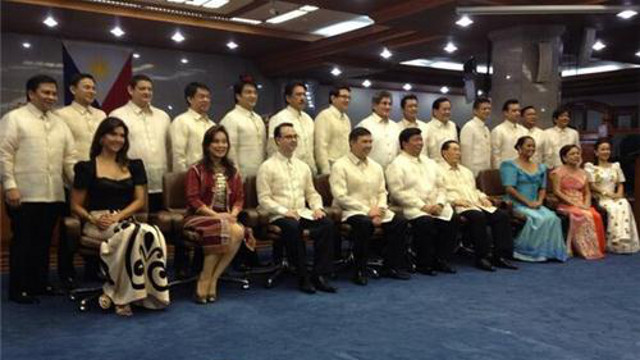 MANILA, Philippines (UPDATED) – Among incumbent senators, Senator Franklin Drilon gained the most in terms of wealth in 2014, based on the Statement of Assets, Liabilities and Net Worth (SALN) submitted by senators.

In a previous version of this story, we reported that Senator Ferdinand “Bongbong” Marcos Jr recorded the highest percentage increase in wealth. We said it jumped by more than 100%, from 197.47 million in 2013 to P509.75 million in 2014. However it turns out that he reported two different versions of his wealth declaration in both years – one based on the appraisal report of Cuervo Appraisers, a firm he had personally tapped (and which reported a net worth of P442 million in 2013), and the other one based on the “tax declaration of real property/acquisition cost” (P197.47 million also in 2013). This latter amount was what was reported in previous news stories.

In 2014, Cuervo Appraisers listed a net worth of P509.75 million, while the other listing indicated P201 million.

In 2013, Senator Teofisto “TG” Guingona III gained the most in terms of wealth.

Meanwhile, Senator Grace Poe obtained the biggest decrease in net worth – 39.84% drop – from P148.95 million in 2013 to just P89.47 million in 2014. In a statement released on Tuesday, Poe said she simply followed the Civil Service Commission (CSC) requirement that no acquisition cost shall be declared for assets obtained through donation or inheritance.

“Thus, all properties inherited from my father were no longer given any acquisition cost but their market values previously indicated remain reflected therein, though no longer included in the computation of the total assets. This explains the apparent significant reduction in my net worth,” Poe said.

The deadline for filing of annual SALNs was on April 30.

Senators Jinggoy Estrada, Ramon “Bong” Revilla Jr and Juan Ponce Enrile remain to be among the richest senators in the 16th Congress. They rank 4th, 5th, and 6th richest, respectively, in the Senate based on their 2014 net worth.

Estrada reported a drop in their latest declaration, while Enrile and Revilla posted a slight increase in his latest SALN.

The 3 senators were arrested and detained in 2014 due to plunder and graft charges filed against them in connection with the pork barrel fund scam allegedly masterminded by businesswoman Janet Lim Napoles. (READ: LIVE BLOG: Pork barrel scam arrests) – with reports from Janina Lim/Rappler.com

Editor’s Note: We earlier wrote that Marcos’ net worth in 2014 is more than double than his 2013 declaration. We have made the necessary correction based on the 2 versions of his wealth declarations for both years.