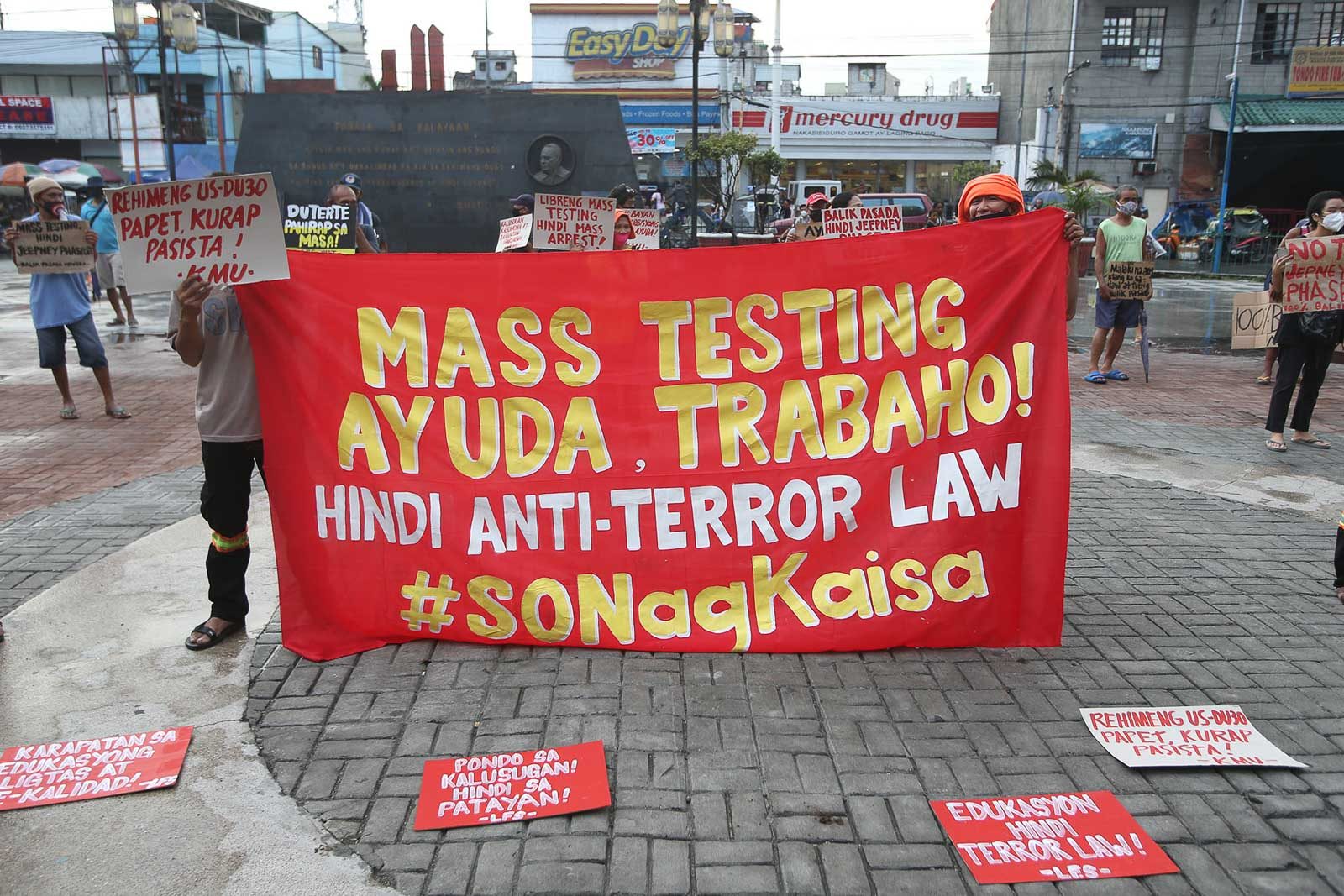 ANTI-TERROR LAW. Police stop protesters airing sentiments over the State of the Nations Address of President Rodrigo Durerte at Plaza Hernandez in Tondo, Manila on July 27, 2020, warning them of arrest if they continue their activity.

Two Aetas in Zambales have been charged with terrorism for allegedly shooting soldiers, the first publicly known case under the feared new anti-terror law.

Japer Gurung and Junior Ramos were charged with terrorism on September  14 before an Olongapo City court, the charge sheet showed. The charge sheet was contained in a manifestation filed by the National Union of Peoples’ Lawyers (NUPL) before the Supreme Court on Wednesday, November 18.

Gurung and Ramos are still detained, according to NUPL president Edre Olalia. Terrorism under Section 4 of Republic Act No. 11479 is non-bailable.

Olalia said Gurung and Ramos were also charged separately with illegal possession of firearms and explosives, which is also non-bailable.

Gurung and Ramos were charged under Section 4(a) of RA 11479 which punishes a person who “engages in acts intended to cause death or serious bodily injury to any person, or endangers a person’s life.”

Based on the charge sheet, signed by Associate Provincial Prosecutor Ritchie John Distor Bolaño, the two Aetas are also accused under other provisions of RA 11479 like causing intimidation to the general public, spreading a message of fear, and seriously undermining public safety.

Gurung and Ramos were accused of firing at members of the 73rd Division Reconaissance Company of the 7th Infantry Division on August 21, resulting in the death of Sergeant Rudil Dilao.

The NUPL said the soldiers planted guns and explosives on the two Aetas.

“(They were) evacuating due to intense military operations and continued bombings in their ancestral lands. They were accosted by elements of the 73rd Infantry Division of the Philippine Army, firearms and explosives planted on them, and falsely accused of being members of the New People’s Army (NPA),” the NUPL said in its manifestation to the Supreme Court.

“Some of the victims were tortured, fed with human feces, and were later charged with violation of Section 4(a) of RA 11479, among other crimes,” the manifestation said.

Olalia said that two other female Aetas were charged with illegal possession of firearms and explosives and are also still detained.

“The available facts and circumstances we received so far from our colleagues in NUPL-Central Luzon indicate that the charges were a way of reprisal against unarmed civilians (indigenous people) for the death of a soldier in an alleged encounter with the NPAs in the area,” Olalia said.

“So it proves that almost anything can be contorted to fit the broad and vague definition of terrorism under the Anti-Terror Act,” said Olalia. (READ: It may mean life or death: Activists beg Supreme Court to stop anti-terror law now)

The NUPL reiterated its request for a temporary restraining order (TRO), which other petitioners had also done.

Reiterative motions have argued that the Supreme Court can issue a TRO immediately, saying that the only basis needed to do so is for a law to be alleged to restrict speech.

The Free Legal Assistance Group (FLAG) has appealed to the Supreme Court to hold the preliminary conference virtually instead, as a safeguard against catching COVID-19. – Rappler.com