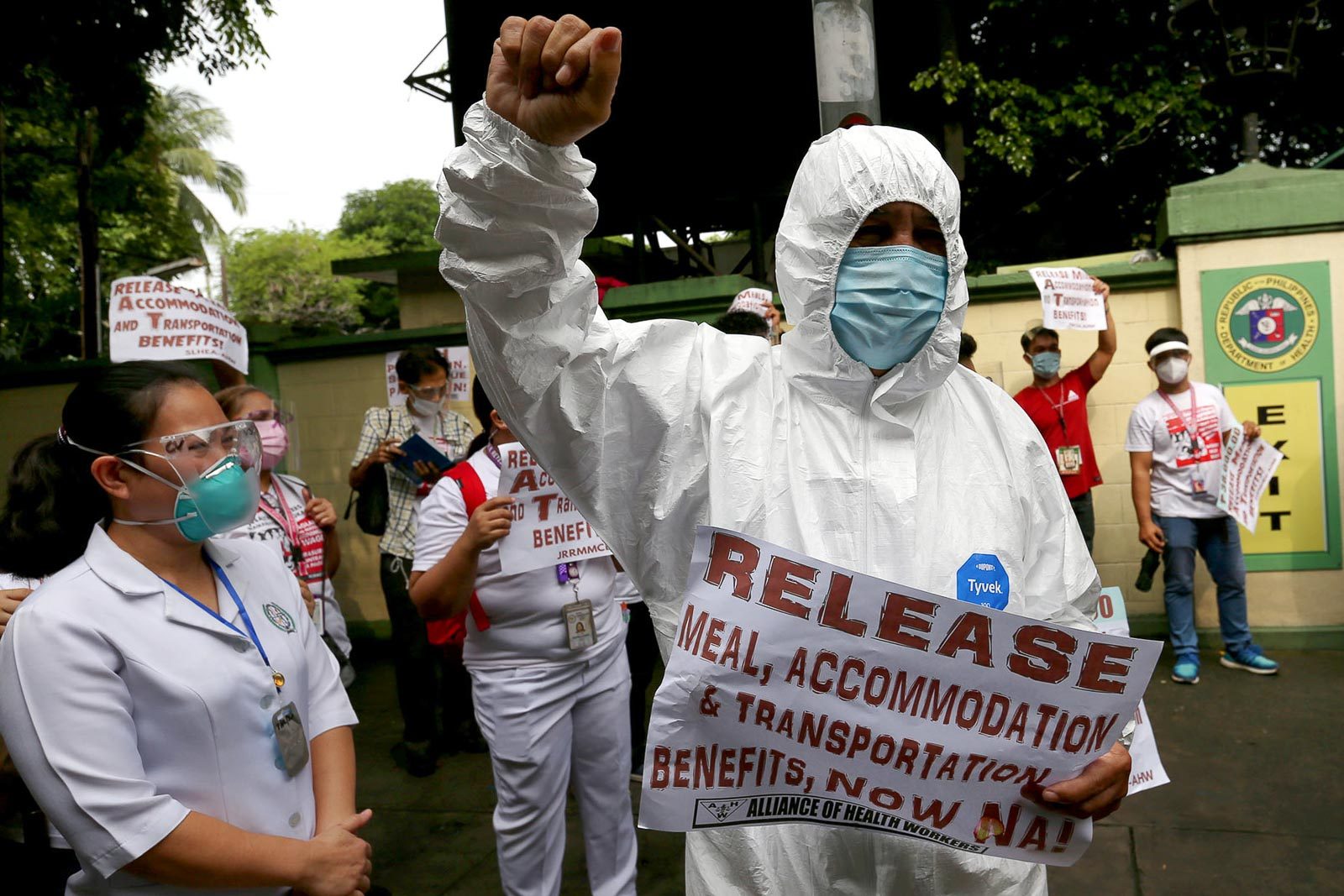 Healthcare workers from public and private hospitals protest outside the Department of Health on Friday, July 16, 2021, to call for the immediate release of their unpaid benefits and hazard pay.

Facebook Twitter Copy URL
Copied
Some P11 billion under Bayanihan 2 has yet to be disbursed. But can agencies really spend that after June 30?

Almost half of the P6 billion that expired under Bayanihan to Recover as One Act or Bayanihan 2 law was supposed to be for the hiring of health personnel and for COVID-19 social welfare interventions, data from the Department of Budget and Management (DBM) showed.

As of June 30, agencies were able to obligate or commit for payment some P200.25 billion from the P214.12-billion allotment under Bayanihan 2.

Note that this total amount included items that were sourced from the special appropriations provision under Bayanihan 2 (P150.62 billion), as well as the spending authority from 2019 and 2020 budgets (P63.4 billion).

By the end of June, Bayanihan 2 and the 2019 budget expired. Because of this, almost P6 billion expired or reverted to the National Treasury.

With the expiration of Bayanihan 2, some P2.6 billion under the Department of Health could no longer be used. This was supposed to be spent for the continuous operation of COVID-19 laboratory testing services and the hiring of health personnel.

Another P1.26 billion under the Department of Social Welfare and Development also reverted to the Treasury, which was supposed to be spent for DSWD's response and recovery interventions.

Under the Department of Education (DepEd), some P446.23 million for digital education modules, continuity learning plans, and subsidies for students were left unspent.

The interior department also failed to use up P386.26 million or more than 10% of its P2.48 billion for the hiring and training of contract tracers.

The DBM also noted that Philippine Fisheries Development Authority did not even touch its P384.35 million budget for the construction of community fish ports and ice plant facilities. This update, however, was as of January 31 this year.

Despite the seemingly high obligation rate of agencies, some P11.59 billion has yet to be disbursed.

When Bayanihan 2 was extended under Republic Act No. 11519, the law was explicit when it said that the funds should be "available for release, obligation, and disbursement until June 30."

House ways and committee chairperson Joey Salceda had raised that there was "very little room for interpretation" for that provision.

Yet, the economic managers said that only about P6 billion had reverted to the Treasury.

Zy-za Suzara, executive director of budget watchdog iLead, told Rappler that the economic managers should clarify what rule should prevail. Suzara was a former DBM staff.

"What should prevail technically? Is it the validity of the GAA (General Appropriation Act) from which Bayanihan 2 funds are sourced, or is it the Bayanihan 2 [extension] provision?" Suzara said.

She warned that without any guidance from the DBM, agencies might become "too scared" to disburse funds.

Among departments, DepEd topped the list of the slowest agencies to disburse its funds. As of June 30, only a fraction of its P4.3-billion budget was actually spent, amounting to P157.8 million.

And while the Office of Civil Defense has committed all of its P1.07-billion budget for the operations of COVID-19 facilities, some P650 million has yet to be disbursed by the agency.

The Department of Public Works and Highways' Tourism Road Infrastructure Program also has a low disbursement rate of 59.08%, which meant that about P400 million has yet to be spent.

The DBM marked the Department of Transportation as having obligated all of its budget for pandemic interventions for the transportation industry.

However, it is still unclear whether the attached agencies were actually able to disburse the funds, especially for the service contracting program of the Land Transportation Franchising and Regulatory Board.

The DBM also marked the labor offices as having a good record in spending its Bayanihan 2 funds. While the Department of Labor and Employment (DOLE) was unable to obligate P15 million, it was able to use up all of its P2.78 billion for the cash-for-work program. DOLE has since said that it had already used up all of its budget for emergency hiring.

The Overseas Welfare Workers Administration was also able to nearly obligate all of its P500-million funds – only P1,966 was left. Around P200,000 has yet to be disbursed by OWWA.

Based on the COVID-19 releases data of the DBM, pandemic measures that are under Bayanihan 2 but funded through the 2020 GAA amount to a total of P48 billion. Of this amount, some P7.9 billion remain unobligated.

According to the DBM on Tuesday, July 27, that amount did not revert to the Treasury. The 2020 budget is valid until end-2021.

DBM also said that a total of P568.33 billion has been committed for payment for the Bayanihan 1 and 2 laws from the total allotment of P602.05 billion.

DBM said that the P26.23 billion committed for payment under the 2021 GAA include payments for COVID-19 vaccines. However, only P9.41 billion has been released from that amount.

The DOH has also failed to release the salaries and benefits for health personnel worth P959.83 million as of June 30. – Rappler.com