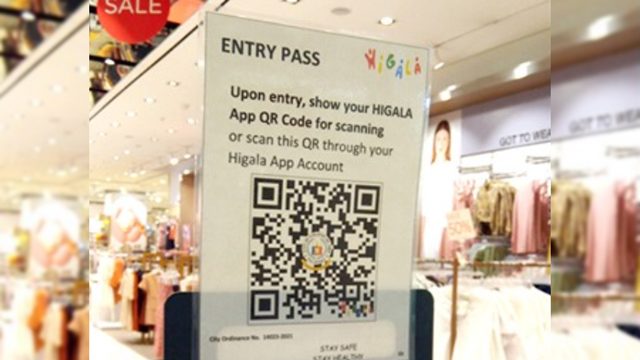 SUSPENDED. The implementation of a Cagayan de Oro mandating QR codes in business establishments is suspended after a position paper from businessmen.

The Cagayan de Oro City Council suspended the implementation of an ordinance that compels commercial establishments here to refuse entry to people without QR codes that can be dowloaded through an app developed for the city.

The decision came after the Cagayan de Oro Chamber of Commerce and Industry (Oro Chamber) submitted a position paper to ask local officials to review the QR code ordinance.

Councilor George Goking said the Oro Chamber’s opposition pressured the City Council on Monday, April 5, to move the full implementation of Ordinance No. 14023-2021, otherwise known as the “Higala App” city law, from April 7 to May 5.

The paper, signed by Ruben Vegafria and Jaime Rafael Paguio, Oro Chamber president and chairman, respectively, asked councilors to review the measure, and make the ordinance “friendlier and less punitive.”

Lawyer James Judith, an outspoken critic of the Higala app, said many people were worried that the system set up by city hall would compromise citizens’ data. He said no assurance was given that the system cannot be hacked.

Vegafria said the ordinance contravenes the order of the Inter-Agency Task Force on COVID-19 on the use of the  StaySafe.ph app, “which is wider in scope and easier to access and use unlike the Higala app.”

He said nonresidents of Cagayan de Oro are required, based in the city law, to register through the Higala app, and “the penalties for violators are superfluous.” In the ordinance, erring establishments could lose their permits to do business in the city.

The group argued that the Higala app is not widely used, and neither has it been integrated into the StaySafe app system.

Reads part of the Oro Chamber’s position paper: “With the pandemic, the businesses will have to swallow the bitter pill of refusing prospective customers who cannot show their QR codes, and worse, even if they show their StaySafe QR codes, which is not integrated in the Higala app… they will still be refused entry.”

It added, “It is very hard to access due to the lack of adequate IT infrastructure when it was developed,” and “uses an unsecure site which is vulnerable to data hacking and theft and may be subject to abuse since the data are not encrypted.” – Rappler.com