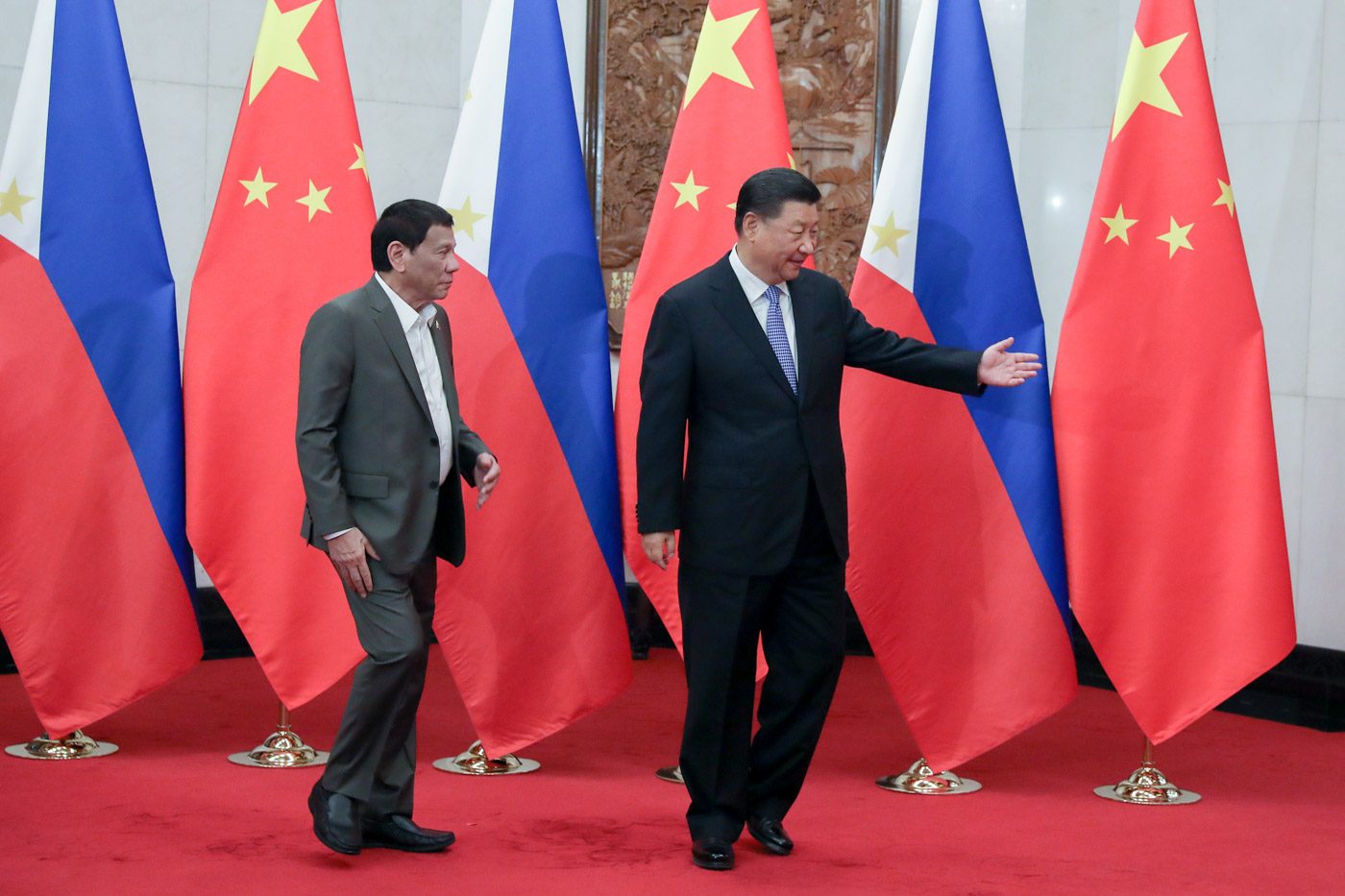 PH-CHINA. President Rodrigo Roa Duterte is accompanied by People's Republic of China President Xi Jinping inside the Diaoyutai State Guesthouse in Beijing prior to their bilateral meeting on August 29, 2019.

China on Monday, July 13, refused to heed the Philippines’ recent call to comply with the 2016 Hague ruling, once again rejecting the historic award as “illegal and invalid.”

The Chinese embassy in the Philippines said it has “taken note” of the statement Philippine Foreign Secretary Teodoro Locsin Jr made on the 4th anniversary of the ruling, but that it will not recognize the award which affirmed the Philippines’ rights in the West Philippine Sea.

What call? Locsin had earlier said the arbitration case which had been “overwhelmingly won” by the Philippines and was based on the United Nations Convention on the Law of the Sea (UNCLOS) “conclusively settles the issue of historic rights and maritime entitlements in the South China Sea.”

Locsin reiterated that the ruling struck down as illegal China’s 9-dash line, which it used to claim virtually the entire South China Sea, and stressed that China’s actions in the West Philippine Sea were found to have violated the Philippines’ rights.

He then urged China, as a signatory to UNCLOS, to comply with the award in “good faith,” calling the ruling “non-negotiable.”

China, however, rejected this as it doubled down on its position to ignore the ruling. Since the award was handed down in 2016, Beijing has refused to recognize it, saying it was “nothing more than a piece of waste paper and cannot be enforced.”

“China’s territorial sovereignty and maritime rights and interests in the South China Sea will under no circumstances be affected by this award. China firmly opposes and will never accept any claim or action based on aforesaid award,” it said.

Heated topic: The thorny issue remains one of the most contested aspects of the ties between the Philippines and China, with Filipinos criticizing President Rodrigo Duterte for placing the ruling on the back burner as he nurtured close ties with China.

Duterte had earlier raised the ruling in a meeting with Chinese President Xi Jinping, who reiterated China will not budge on its position.

Harping on improved ties seen under the Duterte administration, China also sought to “highlight” it reached a “consensus” on “properly handling the so-called arbitration case, which has laid down solid ground for the turning-around of bilateral relations.”

It’s a line often mentioned by China, though the Philippines has continued to assert the ruling and protest Beijing’s unlawful moves in the West Philippine Sea. (READ: On 45th year of diplomatic ties, PH shows complicated relationship with China)

Meanwhile, China has continued to disregard the ruling as it carried on with its aggressive tactics to assert its sweeping claims over the South China Sea.

Recent months alone have seen China push on efforts to assert its ownership over the South China Sea by conducting controversial military drills as well as naming features and districts in the strategic waterway. Beijing’s moves were met with fierce opposition form Southeast Asian claimant states as well as the United States.

Experts including retired Philippine Supreme Court associate justice Antonio Carpio and internationally-renowned lawyer Paul Reichler had pointed out that like the Philippines, countries should invoke the Hague ruling and call out China’s expansive claims. This, they said, was one of the best ways to enforce the award.

The ruling has been regarded by maritime law experts as one of the best and most effective arguments under international law to thwart China’s encroachment of Southeast Asian countries’ exclusive waters. – Rappler.com