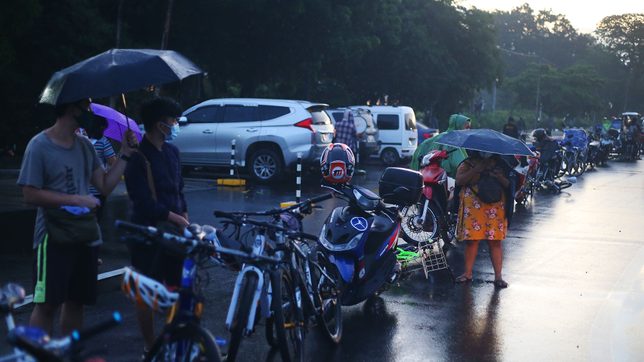 People who wants to avail the free COVID19 test spend overnight to line up for the next day testing at the drive-thru test in Quirino grandstand, Manila on July 24, 2020. PHOTO BY INOUE JAENA / RAPPLER

The Philippine coronavirus caseload leaped past 78,000 on Saturday, July 25, as over 2,000 new infections were added to the tally for the 3rd straight day.

These additions pushed the number of total cases closer to the 85,000-milestone that experts from the University of the Philippines projected the country would reach by July 31.

Despite being under a general community quarantine, Metro Manila has reported staggering numbers of 1,000-plus cases in 9 of the last 10 days, or since July 16.

Ten fatalities were from Central Visayas, 6 from Metro Manila, two Calabarzon, and one each from Central Luzon and Zamboanga Peninsula.

The latest data tallied 50,763 active cases in the Philippines.

According to the website worldometers.info, as of Saturday, the Philippines had the highest number of active cases among ASEAN member-countries. The country was second to Indonesia in total cases reported, and the second highest total cases per one million population behind after Singapore.

The DOH also reported that 51 duplicates had been removed from the total case count, as part of its cleaning and validation process. Among those removed were 25 recovered cases and 2 deaths from previous reports.

The department also said that 3 cases previously reported as recoveries were found to be deaths, after further validation. – Rappler.com