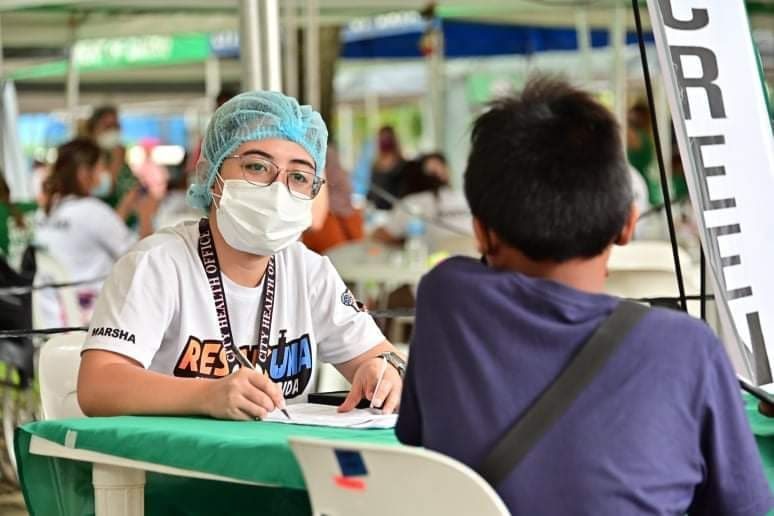 DATA GATHERING. A Davao City health worker gets data from a resident about to be vaccinated against COVID-19.

Dr. Ricardo Audan, SPMC hospital chief, told Rappler on Monday, January 31, that 210 others were also tested and are waiting for their RT-PCR results.

Of the 384 found positive for COVID-19, only a dozen were confined in the hospital for moderate symptoms while 372 others have gone on home quarantine.

The newly detected infections were on top of the 510 COVID-19 cases involving SPMC workers last week, according to Audan.

“All of them are fully vaccinated. Hopefully, those who have recovered could return to work now as the new guidelines on fully vaccinated and boosted individuals only require five days of quarantine,” he said.

Audan said 66 of the workers had travel histories, including five who went to Manila and four who were sent to help in the Dinagat Islands, a province devastated by Typhoon Odette (Rai) in December 2021.

Secretary Carlito Galvez Jr., chief implementer of the national pandemic action plan, has directed the Office of Civil Defense in the Davao Region to facilitate the deployment of a 25-person team of health workers from the military to the SPMC.

“I just received Secretary Galvez’s response today (Monday) about my request for healthcare personnel,” said Audan, adding that the SPMC was already very short of workers because of the infections.

He said the Philippine National Police also sent the SPMC 21 nurses to augment the hospital’s workforce.

“We have already maxed out our healthcare personnel in the city, and we cannot send help to SPMC anymore,” she said.

The SPMC alone has logged 1,046 active COVID-19 cases and five deaths due to the virus as of Sunday, January 30.

Its hospital care utilization rate remains high, with an intensive care unit capacity usage of 79.57%. Of its 93 ICU beds, 74 were being used.

The SPMC only admits patients considered moderate to critical cases.

Audan said 85% of the patients now admitted to the SPMC were unvaccinated, and most of them come from Davao City.

“Hopefully, this surge would slow down soon so that the hospital wouldn’t be overwhelmed,” he said.

Audan said the SPMC has added 32 more beds, but “we can’t use these yet because we don’t have enough [workers] yet.”

He attributed the surge in the number of infections that have overwhelmed the SPMC to the more transmissible Omicron variant of COVID-19.

The Department of Health (DOH) in the Davao Region counted a dozen more Omicron variant cases in the region on Saturday, January 29.

Of these, 10 were due to local transmissions, and two were brought to the region by people who came from other countries.

Eight of the 12 were detected in Davao City, where the number of COVID-19 cases soared in January.

DOH data also showed 19 coronavirus-related deaths in the region during the period. – Rappler.com