CORONAVIRUS OUTBREAK. In this file photo, Health Undersecretary Maria Rosario Vergeire gives updates on COVID-19 in the Philippines on February 17, 2020.

Facebook Twitter Copy URL
Copied
'As long as our public would not be able to comply with the minimum health protocols that are there, andiyan na po yung posibilidad na dadami at dadami ang kaso,' says Health Undersecretary Maria Rosario Vergeire

Are Filipinos not complying with the COVID-19 health protocols?

In a virtual press briefing on Monday, March 8, Health Undersecretary Maria Rosario Vergeire said the “underlying cause” of why the country is experiencing a rise in cases is the public’s “non-compliance” with the health protocols for COVID-19.

“As long as our public would not be able to comply with the minimum health protocols that are there, andiyan na po yung posibilidad na dadami at dadami ang kaso (the possibility of rising cases remains),“ she said.

According to Vergeire, the rise in COVID-19 cases “cannot be solely attributed” to the presence of the more infectious variants in the country.

“Ang gusto ko lang maging klaro sa ating lahat (I just want to make this clear to everybody), whatever increase in the number of cases that we’re having right now cannot be attributed solely to the variants,” she said.

“Ayaw din natin na tinatakot ang mga tao na kasi pumasok ang mga variants kaya tumaas ang mga kaso, no. Nakikita na po natin ang trends natin, at nakita po natin na (We don’t want to sow fear among the public that the reason why there’s a rise in cases is due to the new variants. We’re seeing the trends, and we saw through) observation there has been a lapse with our compliance with minimum health protocols,” she added.

What you can do to stay safe during the coronavirus pandemic

Experts studying the coronavirus outbreak in the country said on Sunday, March 7, the Metro Manila surge was happening more quickly than it did back in July to August 2020.

Octa Research warned that, if the surge is not managed, the Philippines may see 6,000 new coronavirus cases daily by March 31.

During Monday’s briefing, Vergeire confirmed the rise in cases, but said media should refrain from saying it is a “surge” already, as scientific evidence is needed to call it such.

“Our cases have markedly increased from the previous. From December 29 to January 2, tiningnan namin ang trend ng cases po natin (we checked the trend of our cases). Our national cases was averaging 1,100 to 1,200,” she said. 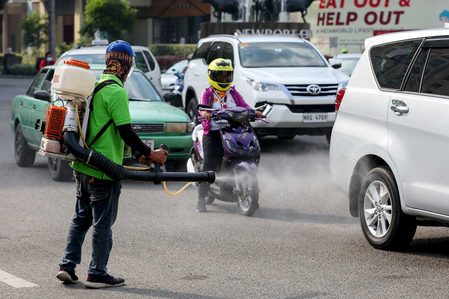 The Philippines’ daily positivity rate – or the percentage of all COVID-19 tests performed that are actually positive – also hit 9.16% on March 3, according to Rappler monitoring.

On Friday, March 5, the health department reported 52 new cases of the more infectious South African variant, bringing total cases of this virus type in the country to 58.

Experts said that the South African variant called B1351 may have an impact on vaccine efficacy.

Meanwhile, 31 new cases were also reported for the United Kingdom variant of the virus, called B117 – which experts also say more transmissible than the original version of the virus. This pushed total infections of this virus type to 118.

Vergeire also clarified reports over the weekend that hospital occupancy is already overwhelmed following the rise in COVID-19 cases.

“To say that the system is overwhelmed, no. Kapag tiningnan natin ang ating (If we’re to check our) healthcare utilization, we’re still at that manageable level na mayroon pa tayong almost 50% na puwede i-provide (we still have almost 50% which we can provide),” she said.

In the past few weeks since February 21, COVID-19 related admissions in PGH have increased form 68 to 105 as of March 6.