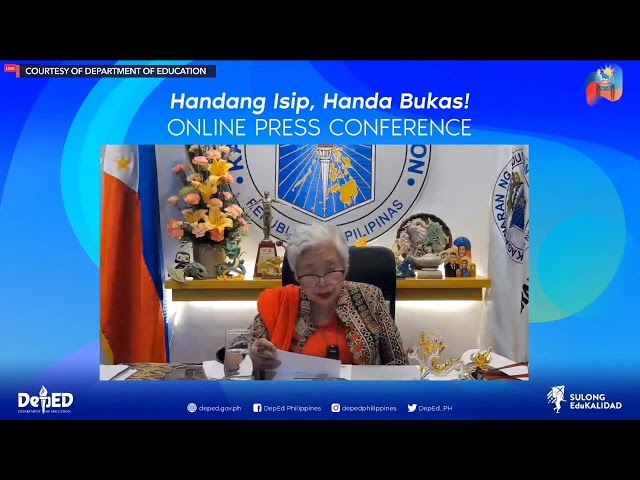 Education Secretary Leonor Briones made the announcement in a virtual press briefing on Friday, August 14.

“President [Rodrigo Duterte] has given approval to the recommendation of DepEd. Thus, we will implement such a decision to defer school opening to October 5 pursuant to Republic Act No 11480,” Briones said.

RA 11480 is the newly-signed law that gives the President power to move the school opening past August due to calamities, upon the recommendation of the Secretary of Education.

According to Briones, she made the proposal to delay the school opening as early as August 6 due to logistical limitations brought on by the imposition of a modified enhanced community quarantine (MECQ) in Metro Manila and in the provinces of Bulacan, Cavite, Rizal, and Laguna.

The student population in these areas “are very significant,” she said.

Metro Manila and the nearby provinces are under MECQ until August 18.

In a Senate hearing on Wednesday, Senator Francis Tolentino said the Senate committee on basic education has yet to receive the implementing rules and regulations (IRR) of the new law, which will come from the DepEd.

(With or without the IRR, the implementation of this provision continues. It’s in the law. The President has already used the power in this law based on our recommendation.)

Briones said they considered the new school opening date based on the extent of the preparations needed to be done.

(Region IV was asking for September 7, while NCR wanted one more week [of extension]. We thought of adding an allowance due to the impact of COVID-19 on our logistical requirements and activities because we’re working under a skeleton force for now.)

Briones added that October 5 was also decided on by Duterte. She also assured that all the materials needed for the school opening would be ready by that time. (WATCH: Handa na bang magbukas ng klase sa Agosto 24 ang Pilipinas?)

What about private schools?

During Friday’s briefing, Briones said that the new order also applies to private schools. However, DepEd will not stop classes in schools that have already opened prior to the new order.

Briones said that most of these schools operate under universities and colleges, and must follow community quarantine protocols and health standards.

“Private schools are under the umbrella of DepEd, and as far as basic education is concerned…may sarili din silang operations (they have their own operations), activities, which they also comply with. Ang gusto namin (We want), generally, naka-comply sila (they comply with) sa DepEd regulations,” Briones said.

Briones said, even with the October 5 opening of classes, distance learning will still be used, as face-to-face classes remain prohibited.

The DepEd decided to shift to distance learning for the coming school year to comply with the President’s order that schools postpone face-to-face classes until a coronavirus vaccine becomes available.

Prior to the postponement of classes, DepEd made headlines following issues in the printing of self-learning modules, the launch of school readiness programs being marred by technical glitches, and “painful” grammar errors in TV episodes to be used for distance learning.

Several groups and lawmakers have earlier called on DepEd to delay the opening of classes, as more time is needed to prepare the transition to the overhauled education system. (READ:Senators remind DepEd: New law allows class opening past August during calamities)

Some 23 million public and private schools students have signed up for the school opening. This is 4 million lower than last year’s 27.7 enrollees.