EVACUATION. Residents of Marikina in an evacuation center after Typhoon Ulysses. 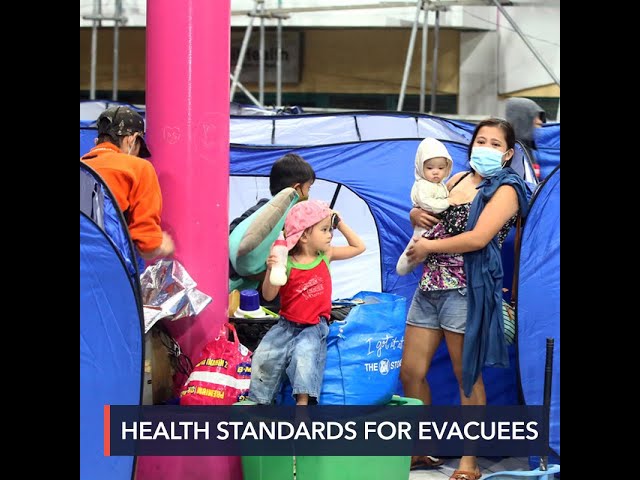 The Department of Health (DOH) said on Monday, November 16, that to avoid a surge in COVID-19 cases in evacuation centers, displaced families must comply with minimum health standards such as wearing of face masks, practicing physical distancing, and frequent hand washing.

(In an area where people are all together, especially there’s a crowding and they won’t follow minimum health standards, [a surge] is a possibility.)

Vergeire said this was why the government made sure that each evacuation center has safety officers to “ensure that at least minimum health standards will be complied.”

“At saka kapag meron silang na monitor na may sakit ay tatanggalin na agad para hindi na makapanghawa pa. Ito ay isang posibilidad. (And if they monitor individuals who are sick, they have to isolate them immediately.  This is a possibility). But the government is doing everything it can to prevent this to happen,” Vergeire said.

Super Typhoon Rolly (Goni), which came in early November, killed at least 22 people and left billions of pesos in damaged houses, property, and crops. The devastation was followed by yet another storm – Typhoon Ulysses (Vamco).

The DOH earlier said that testing residents before they’re transferred to evacuation centers might not be feasible due to the situation’s urgency.

The agency recommended that local officials conduct symptom checks, transfer those who have symptoms to quarantine centers, and ensure that quarantine or isolation centers are separate from evacuation centers.

Experts studying the coronavirus outbreak in the Philippines said that the number of COVID-19 cases in the country continues to decrease even with the resumption of testing services of the Philippine Red Cross (PRC).

In its report published on November 2, the Octa Research Group noted the decrease in cases in virus epicenter Metro Manila, with an average of 490 cases per day.

Meanwhile, the experts noted that the country’s reproduction number – or the number of people that one positive case can infect – increased slightly to 0.86, which was still below 1.