DOH recommends extending ECQ in ‘NCR Plus’ for another week 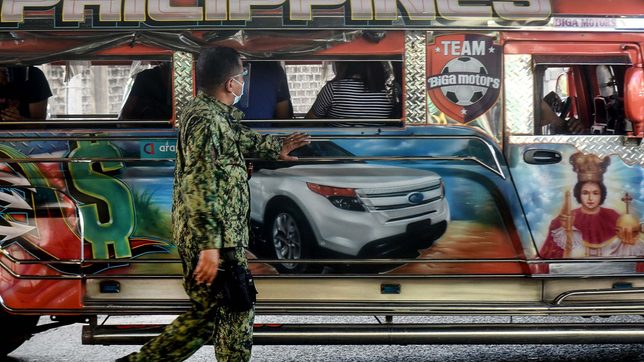 STRICT. Quezon City police officers issue Ordinance Violation Receipt (OVR) to commuters who are not wearing face mask and face shields inside pubic transportations entering Quezon CIty from Marikina and Rizal Province at a checkpoint along Aurora Blvd on Monday, March 29, 2021, the first day of the implementation of the Enhanced Community Quarantine in NCR.

Health Undersecretary Maria Rosario Vergeire said the Department of Health has recommended to the government’s task force that the enhanced community quarantine in Metro Manila and 4 other nearby provinces should be extended by another week.

On Tuesday, March 30, Vergeire said the ideal period for quarantine restrictions to impact the spread of cases was still at two weeks, as this was the incubation period for the coronavirus.

“One week really is short. We have recommended an extension. But of course, we need to balance it off with the economy. That’s why we need to have enough basis for us to have this extension,” Vergiere said in an interview with ANC’s Matters of Fact.

The ECQ – the strictest quarantine measure in the Philippines – is currently in place for a minimum of one week from Holy Monday, March 29, to Easter Sunday, April 4.

Why another ECQ is needed

Vergeire said the goal of the ECQ is to slow down the spread of cases by decreasing mobility of people, augment resources of hospitals, manage the flow of patients, and strengthen the response of local governments to test and isolate both suspected and confirmed cases.

A steep increase in cases in recent weeks has brought the pandemic in the Philippines to it worse phase yet, with over 10,000 new cases reported daily – the highest since the health crisis started.

As health experts assessed the country’s situation to determine whether to extend the ECQ, Vergeire conceded it was possible that one week was also too short to make an assessment on any progress in some key indicators, like the number of daily cases and health care utilization.

“Yes, that (one week) is really short. As I have said, we won’t even see any changes in our numbers. We might see more numbers after this one week because what we are seeing right now is the numbers two weeks prior  to this week. So we are still going to see an accumulation of these numbers in the next two weeks,” she said.

She added, “Our doors are not closed. When we said its one week, we are not saying its cast in stone and its just really one week. We will be assessing and after assessment we will be determining if we need to extend.”

The DOH earlier said an ECQ was necessary to prevent active cases from growing threefold from the current 105,000 active cases. Without hard restrictions that could blunt the spike in cases, DOH projected the country could see about 430,000 active cases by end-April – a scenario that could cripple the health system.

Earlier on in the pandemic, the World Health Organization had recommended countries to wait at least two weeks to evaluate the impact of restrictions on cases before deciding to ease rules again.

“Ideally there would be a minimum of two weeks between each phase of the transition, to allow sufficient time to understand the risk of new outbreaks and to respond appropriately,” it said in April 2020.

Vergeire said the DOH and the National Economic and Development Authority were putting together a cost-benefit analysis of extending the ECQ that would consider the impact of extended restrictions on the economy and overall health of Filipinos.

In a press briefing, Presidential Spokesperson Harry Roque said the extension of ECQ in Metro Manila, Laguna, Cavite, Rizal, and Bulacan would be the “absolute last resort” of the government.

National Task Force for COVID-19 chief implementer and vaccine czar Carlito Galvez Jr, however, said that if cases continued to increase and the spike worsen, the government will “seriously look” at recommendations to extend the ECQ. – Rappler.com