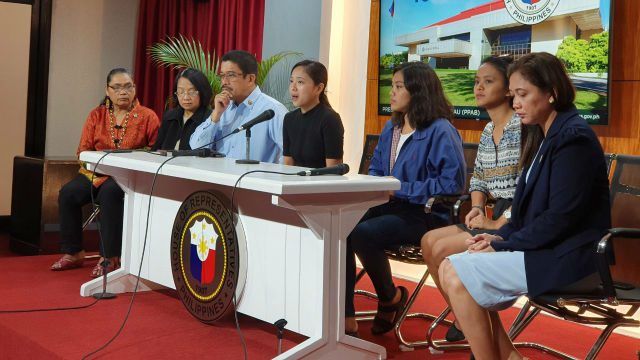 Facebook Twitter Copy URL
Copied
Prosecutors make a categorical statement that, at least for this case, there is no link between activists and communist rebels

The Department of Justice (DOJ) junked kidnapping and war crimes complaints against known activists, including Sarah Elago and Neri Colmenares, over the case of a student who left home because of family problems.

Relissa Lucena, with the police’s Criminal Investigation and Detection (CIDG) unit, accused the activists of radicalizing and then kidnapping Alicia Jasper “AJ” Lucena, then a senior high student of Far Eastern University (FEU).

By red-tagging the groups Kabataan, Gabriela, and Anakbayan, the complaint also accused the activists of committing a war crime through recruitment under Republic Act No. 9851 or the Philippine Act on Crimes Against International Humanitarian Law, Genocide, and Other Crimes Against Humanity.

Mrs Lucena and the CIDG sued the activists under Section 4(c)(24)(ii) or war crime through the recruitment of minors to join hostilities.

“Anakbayan is just a comprehensive national mass organization of the Filipino youth that is advocating for jobs, land reform, education, rights, and justice. There is also no evidence presented showing that Anakbayan is the recruiting arm or somehow connected to the CPP-New Peoples Army-National Democratic Front (NDF),” said the resolution dated October 15 and approved by Senior Deputy State Prosecutor Richard Fadullon and Prosecutor General Ben Malcontento.

This resolution comes amid an intensifying red-tagging campaign by the military against activists, made against the backdrop of a feared anti-terror law.

AJ has repeatedly gone on record about her family problems, and that she was not kidnapped by Anakabayan which she joined, but the police and military still used her story to brand activists as communists out to recruit minors.

Noting AJ’s mother’s story that the young activist still occasionally went home, the DOJ said “complainants failed to show that the (activists) were entrusted with the custody of (AJ) and that they deliberately failed to restore/return her home.”

Mrs Lucena has also failed to get an extraordinary writ from the Supreme Court as justices last month junked the petition and said AJ was old enough to make her own decisions. AJ is now 19 years old.

The CIDG used the confession of two self-admitted rebel returnees, who swore in an affidavit that they were recruited by the groups League of Filipino Students, Kabataan, and Gabriela Youth to become members of the NPA.

This was the CIDG’s way to link the progressive groups to communist rebels, but the DOJ said that the returnees’ confessions were mere testimonies “on matters that they know through their personal knowledge and perception.”

It does not establish probable cause, said the DOJ.

“It is likewise worth mentioning the failure of the complainants and their witnesses to present evidence showing the connection of Anakbayan to LFS, Kabataang Makabayan and Gabriela Youth, or Anakbayan to CPP-NPA-NDF. They also failed to present any evidence that would connect the respondents with the CPP-NPA-NDF,” said the prosecutors.

There is no law that criminalizes communism in the Philippines.

Lawyer Tony La Viña, who represented Elago in the case, said the DOJ’s “categorical statement” that there was no link between the groups and the CPP-NPA-NDF is a welcome development.

“The former are legal organizations and work accordingly. It does not matter if they have the same ideals, positions, or even ideology as other groups. Our constitution guarantees freedom of political belief,” said La Viña.

But La Viña said “it would have been better  if resolved quicker as this was a Damocles sword on good people and great organizations.” The case was brought to the DOJ in August 2019 or more than a year ago.

In a statement, Kabataan  Party-List said: “These trumped-up cases filed by agents of Duterte’s fascist government have once again proved to be inutile and nothing more than empty ramblings of the Philippine National Police and the Armed Forces of the Philippines.” – Rappler.com