JOKE'S ON YOU. President Duterte once said he would ride a jet ski to the West Philippine Sea. 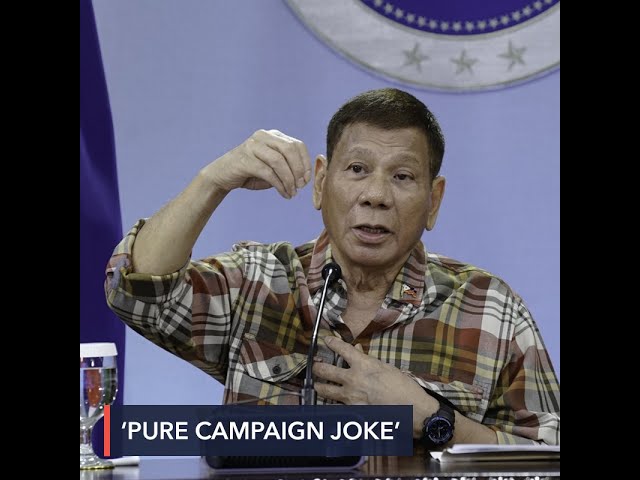 Philippine President Rodrigo Duterte derided those who literally believed in his 2016 campaign promise to ride a jet ski to the West Philippine Sea by expanding his “joke” during a public address again devoted to criticisms of his China policy.

(I planned it. I bought a jet ski. I could only afford a second-hand one. So I ordered parts, until now, it hasn’t arrived. So nothing arrived, there was nothing I could do.)

He said he even “plotted” his route to the Kalayaan Group of Islands (a part of Spratlys) but gave up on the trip when he saw there were no “gas stations” in the middle of the West Philippine Sea.

Duterte even called on Defense Secretary Delfin Lorenzana to attest that the Kalayaan islands are very far from Palawan. He said the waves in the open sea were as big as ships.

“Mahirap ito…. Alam ba ninyo hindi ako marunong maglangoy? (This will be hard…. Do do you know I don’t even know how to swim?)” said Duterte.

Duterte resurrected his 2016 “jet ski” promise because critics panned his recent claim that he never promised to “pressure China” on the Philippines’ rights over the West Philippine Sea.

The media had fact-checked him, citing his “jet ski” vow. Many viewed the promise as Duterte’s way of saying he would assert the country’s sovereign rights, even in the face of China’s military might.

But to Duterte, critics took his remarks literally and are thus “stupid” for doing so.

“Yung bravado ko, it was a pure campaign joke. At kung naniniwala kayo, sa kabila, pati siguro si Carpio, I would say that you are really stupid,” said the President, referring to retired Supreme Court justice Antonio Carpio whom he had earlier challenged to a debate.

(My bravado, it was a pure campaign joke. And if you believed it, you on the other side, maybe also Carpio, I would say that you are really stupid.)

Duterte eventually backed out of a debate with Carpio which he had originally proposed to be about the West Philippine Sea.

While Duterte insisted his jet ski promise was just a joke, he had promised, in 2018, to “go to Benham Rise” on the other side of the Philippines to assert the country’s ownership of it. He had even delivered a speech at the BRP Davao del Sur docked in Casiguran Bay, Aurora and his aide, now senator Bong Go, and his son Sebastian, rode jet skis nearby. – Rappler.com