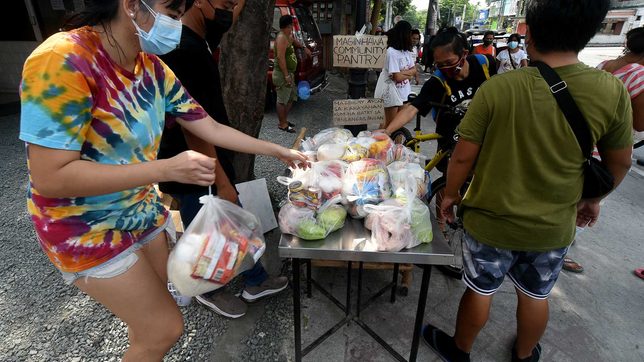 ACT OF SELFLESSNESS. Ana Patricia Non, left, refills the Maginhawa Community Pantry with food donations from people they don’t even know on April 16, 2021

Ana Patricia “Patreng” Non, the woman behind the community pantry movement in the Philippines, renewed calls for donations to makeshift food banks as many parts of the country reverted to hard lockdowns due to the threat of the COVID-19 Delta variant.

Non made the appeal in a Facebook video posted on Monday, August 2, four days before Metro Manila returned to the enhanced community quarantine (ECQ), the strictest form of lockdown under the Duterte administration.

(I appeal to those with the resources to donate to the community pantry near you or to our neighbors in need.)

(For those who cannot go out, you can send monetary donations to Community Pantry PH. The money accumulated will be used to buy vegetables and rice to ensure that our poor Filipinos will have something to eat when hard lockdowns begin.)

Community Pantry PH is a network of organizers and advocates of the makeshift, sidewalk free food stations in the country.

Nearly four months after Non established the very first community pantry, other organizers found it difficult to sustain the project as donations slowed.

Non said the new donations would help over 700 community pantries across the Philippines restart or continue their operations.

At its peak, there were more than 4,000 food banks set up in the country back in May, and the initiative was replicated by like-minded individuals in other countries.

Non started her project in April in a bid to fill in the gaps of the government’s pandemic response.

She was catapulted to the national spotlight because of her rare generosity, but also by the unfounded and widely criticized red-baiting by government officials.

On Friday, July 30, Non said the government must step up to ensure that Filipinos have food on the table, following the announcement of Metro Manila’s return to ECQ.

PNP creates guidelines for police on engaging with community pantries

#PHVote Challenge: Beyond voting, how to take action in the 2022 Philippine elections

MapaKalamidad.ph to hold virtual workshop on how youth can engage in DRRM online