Oct 16, 2015 8:13 PM PHT
Paterno Esmaquel II
Facebook Twitter Copy URL
Copied
‘This is a symbol or a representative of a vibrant democracy, where more people feel empowered…to put themselves forward as candidates,’ Comelec spokesman James Jimenez says after the filing of candidacies for the elections in 2016 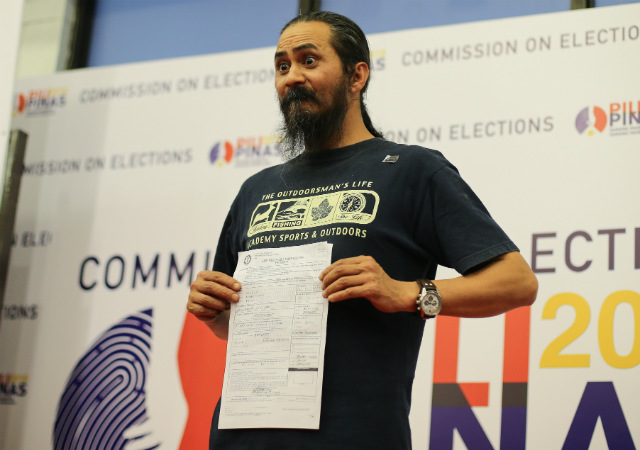 MANILA, Philippines – In what is likely a record breaker, 130 people filed their candicacies for president in a festive, sometimes rowdy week-long event in the Commission on Elections (Comelec) headquarters in Intramuros, Manila.

Comelec spokesman James Jimenez announced this final tally of people who filed their certificates of candidacy (COCs) from Monday, October 12, until Friday, October 16:

They filed their COCs in an fiesta-like event that included dragon dancers and even men in costumes from the recent popular movie Heneral Luna.

(Watch the video report below)

While he has yet to refer to official data, Jimenez said the number of presidential bets – 130 – is “likely” a record breaker.

Media reports said 99 candidates filed COCs for the 2010 elections. Jimenez said the Comelec allowed only 10 of these candidates, including then senator and now President Benigno Aquino III, to run for the presidency.

What do these figures say about the Philippines’ election system?

Responding to this question in an interview with reporters, Jimenez explained that COC filing “should not be considered a reflection” of the election process.

“I think, rather, that this is a symbol or a representative of a vibrant democracy, where more people feel empowered to cast their vote and to put themselves forward as candidates,” Jimenez said.

He added that “the good thing” about this system is that it is “robust.”

“It has a strong mechanism for cutting down these 130 filers down to the reasonable few. That’s the important thing,” he said.

He also clarified that all the 130 COC filers cannot run on election day.

Referring to the number of official candidates, Jimenez said, “We reserve the right to really cut it down to those with a reasonable expectation of victory.”

Only a few of these candidates for president, after all, have been considered serious candidates. These personalities include Poe, Binay, Roxas, and Santiago.

Election watchers described most of this week’s COC filers, on the other hand, as nuisance bets.

(Watch the video report below)

One of them calls himself Archangel Lucifer. Another says he wants to legalize the 4 seasons of winter, spring, summer, and fall in tropical Philippines.

The Comelec is set to screen the nuisance bets in the next few weeks.

Many Filipinos want to run for president because of the loose requirements for the highest position in the land.

Article VII, Section 2 of the Philippine Constitution states: “No person may be elected President unless he is a natural-born citizen of the Philippines, a registered voter, able to read and write, at least 40 years of age on the day of the election, and a resident of the Philippines for at least 10 years immediately preceding such election.”

Election reform advocates want stricter requirements to run for president, such as having a college degree, but their proposals have not prospered. – Rappler.com