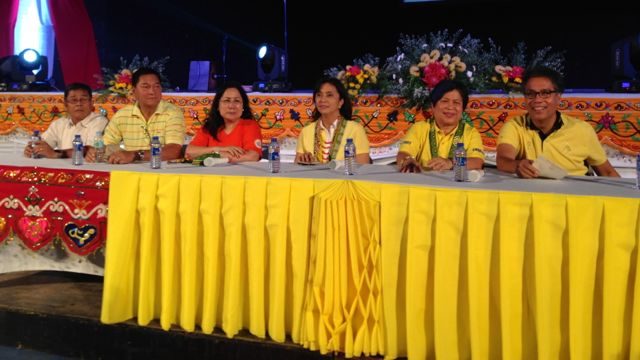 Facebook Twitter Copy URL
Copied
In their first event together since filing their certificates of candidacy, Mar Roxas and Leni Robredo promise to continue the government's flagship poverty alleviation program

KORONADAL CITY, Philippines – Just two days after they formally entered their bids for the 2016 national polls, the Liberal Party (LP)’s Manuel Roxas II and Leni Robredo graced an event of the social welfare department to mark the achievements of the government’s flagship poverty alleviation program.

It was Roxas’ and Robredo’s first event appearing together as the LP’s bets for 2016 since filing their certificates of candidacy last week.

In their message to an estimated 5,000-strong crowd in this city on Saturday, October 17, Roxas and Robredo promised the crowd – all beneficiaries of the Pantawid Pamilyang Pilipino Program (4Ps) – that they will continue the social protection program that provides poor families with cash grants, livelihood programs, and scholarship opportunities.

“We will work to institutionalize this program and make it into law. You need not fear that the benefits and assistance you gain from this program will stop,” Robredo said.

Roxas, meanwhile, linked the continuation of the program with his campaign promise of following Daang Matuwid (Straight Path) – the Aquino administration’s slogan for its anti-corruption and good governance platform.

The two were guests of honor at the event, held at the South Cotabato Gym and Cultural Center and attended by provincial officials and Social Welfare Secretary Corazon Soliman.

The conditional cash transfer program, launched in 2008, is being touted as the government’s answer to solve extreme poverty in the country.

But it has received its share of flak from those who tag it as a mere dole-out program. Critics also claim that some of the program’s beneficiaries are not really the poorest of the poor.

South Cotabato has 65,831 target beneficiaries for 2015, putting it among the top 25 provinces in the Philippines with the most number of beneficiaries. (READ: Where in the PH are the Pantawid beneficiaries?)

In 2012, South Cotabato posted the highest poverty threshold in Region 12, according to a 2014 report by the Philippine Statistics Authority-National Statistical Coordination Board (NSCB).

The NSCB, however, noted that poverty incidence among families dropped from 1991 to 2012 – from 47.4% to 37.1%. But the NSCB added that the speed with which the number of poor families is reduced isn’t enough to meet the government’s target of cutting poverty down to 23.7% by 2015.

The 4Ps event in Koronadal City was not a campaign event for the Roxas-Robredo tandem, but they received promises of support anyway from local politicians, many of whom are are affiliated with the Nationalist People’s Coalition (NPC).

Several new members of the LP were also sworn in later in the afternoon – described by Hernandez as a “seal of marriage” between the two parties.

In a short message, Fuentes said she was initially torn having to choose between loyalty to her party and the administration’s Daang Matuwid.

“When I agreed that almost majority of my mayors will be sworn in to LP, I personally had crossed my Rubicon,” she said.

For her part, Robredo, who led the oath-taking, thanked the new LP members and the NPC for “setting aside personal interests” in service of the country.

“You are our family in this part of Mindanao,” she said.

Roxas also said the two parties are now allies in the fight for good governance.

“Hindi ito tungkol sa partido. Tungkol ito sa kung saan natin maihahatid ang bansa,” he said. (This is not about parties. This is about the kind of future we can lead our country to.) – Rappler.com