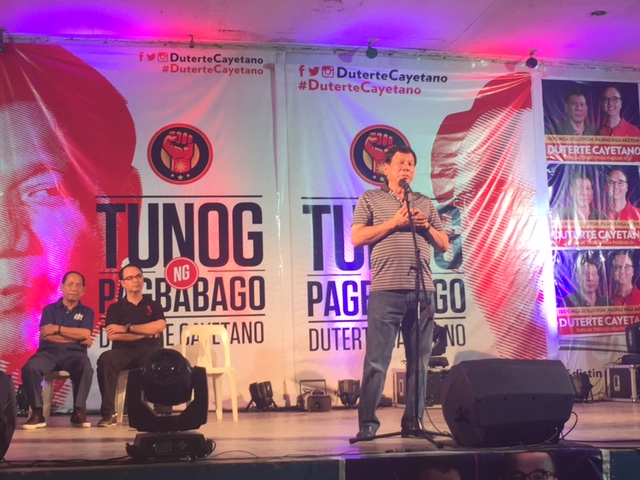 GENERAL SANTOS CITY, Philippines – If Davao City Mayor Rodrigo Duterte gets elected president in the May 2016 polls, he would pursue one-on-one talks with China to assert the Philippines’ rights.

In an interview on the sidelines of the Philippine Jaycees national convention on Saturday, January 16, Duterte said that the South China Sea (West Philippine Sea) dispute is a threat to national security and must be resolved peacefully.

“Sabihin ko sa (I will tell) China, just stop your construction,” Duterte said. “Be courteous about this and we will just talk. We cannot go into war. We cannot afford it.”

Beijing has repeatedly stressed the need for bilateral negotiations, rejecting the involvement of any third party. It also refused to join the arbitration case filed by Manila before an international tribunal in January 2013. (READ: China to PH: Friends avoid lawsuits)

“You have to listen to my declaration – whether you believe it or not, that’s something else – but if we talk, I’d say that the predicate of this talks is that what you are occupying now belongs to the Republic of the Philippines,” he said.

“I will not move an inch backwards,” the tough-talking mayor continued. “The talks should be that, ‘What you are building there, the structures there, maybe you’ll just give it to us or remove it, and I’d be happy.'”

In June 2015, China expert Chito Sta Romana told Rappler that the Philippines’ maritime dispute with China will play a crucial role in the 2016 elections.

“This could be the first presidential election where the China issue, an issue of foreign policy, could play an important role precisely because of the context we are in. All the candidates will have to state what their policy will be if they become president,” Sta Romana said.

A Pew Research Center survey conducted in the Asia-Pacific from April to May 2015 also showed that Filipinos are the most troubled by territorial conflicts in the region. – Rappler.com