Apr 29, 2016 10:58 AM PHT
Rappler.com
Facebook Twitter Copy URL
Copied
Senator Antonio Trillanes IV says once proven wrong, he will pull out of the vice presidential race and 'immediately resign' from the Senate, where his term ends in 2019 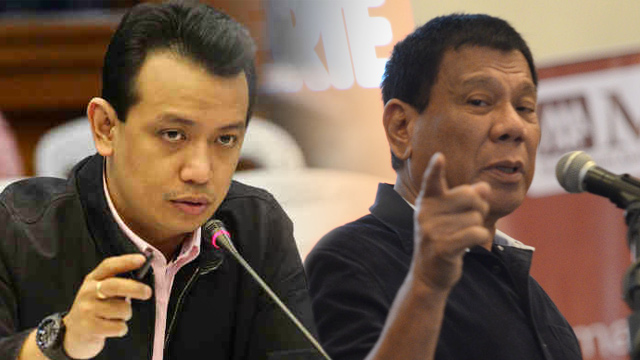 He was referring to Vice President Jejomar Binay’s supposed strategy to avoid testifying before the Senate hearing on corruption allegations against him. Trillanes was among the senators who led the more than yearlong investigation.

(At first, you were so brave, and very transparet in admitting you killed so many, among other things. But now, you’ve lost your courage and you’re hinding behind technicalities. Sign the waiver so that the truth would be revealed.)

The BPI account, Trillanes had earlier alleged, is not declared in Duterte’s Statement of Assets, Liabilities, and Net Worth (SALN), an impeachable offense if he is elected president.

The senator made the statement as he rejected the demand of the Duterte camp to execute an affidavit detailing his allegations against the mayor before the latter signs a waiver to allow scrutiny of his Bank of the Philippine Islands branch in Ortigas.

He dismissed this as the camp’s tactic to “buy time” until the May 9 polls and to track down the source of his information, whom he had promised to protect.

Trillanes said once proven wrong, he would not only pull out of the vice presidential race but would also “immediately resign” from the Senate where his term ends in 2019.

(If my allegations – that there were P2.4 billion in transactions in his account – are wrong, I will immediately resign from the Senate, I will pull out of the VP race. I will no longer be in politics, they can sue me whatever. You’re my witness, Ted, and all those who are listening to us.)

(The entire Filipino people are my witness. I don’t need an affidavit. If I am wrong, that’s it; sue me.  I would have lost face to the whole world. Let’s stop the drama.)

Trillanes said Duterte’s spokesman, Peter Lavina, outrightly denied the existence of the mayor’s BPI-Ortigas account, but Duterte himself contradicted this when it was proven by a private citizen that it existed. (READ: Duterte hiding P211M? That’s ‘garbage’)

Trillanes said he “will not fall into that trap” of executing an affidavit as he has to  protect his informants.

Also in a phone patch interview on the same program, PDP-Laban spokesperson Paola Alvarez wondered aloud why Trillanes was “afraid” to execute an affidavit. “Rule of law should prevail. Why not follow the law?…Let us put the imprimatur of law,” she said.

Alvarez reiterated that the alleged P200-million BPI account did not exist.

(Don’t pull our leg using that legal obstacle, technicalities. VP Binay already did that and it didn’t work….That’s just misdirection.)

Alvarez countered that the demand for an affidavit is meant to ensure that the senator can be held liable if proven that he lied under oath. “There is no Senate investigation now, no prosecution; only persecution.  You are going after our head by using unverified information,” she added.

Trillanes replied that he can he sued for libel, and even for violation of the bank secrecy law, even without executing an affidavit.

The senator also recalled the manifesto signed by Duterte and his running mate, Senator Alan Peter Cayetano, in March, allowing their bank accounts to be scrutinized by the public.

The manifesto, printed on a piece of cardboard, declared that the presidential and vice-presidential candidates who sign it “pledge to open all our bank accounts in local and foreign currencies both here and abroad in the interest of transparency and accountability.”

Asked about this, Alvarez said this was just a “general waiver” that cannot be used for the BPI account. She reiterated that the Duterte camp is ready to execute a specific waiver once Trillanes complies with the affidavit challenge.

Trillanes claimed this only proved that the March manifesto was “all for show, has no use, and only for propaganda.” He said Duterte as gung-ho for transparency in this regard in March, but not anymore.

(Mayor Duterte is always like that, all propaganda. If he’s cornered, he’ll change his tune. That’s happened several rimes. On what Atty Alvarez is saying – I’m not a lawyer but I’m also not stupid.)

Rival camps have called on Duterte to come clean on the issue.  (READ: Roxas slams Duterte for ‘lying’ about BPI account  and  Poe to Duterte: Why blame me? Disprove bank account) – Rappler.com