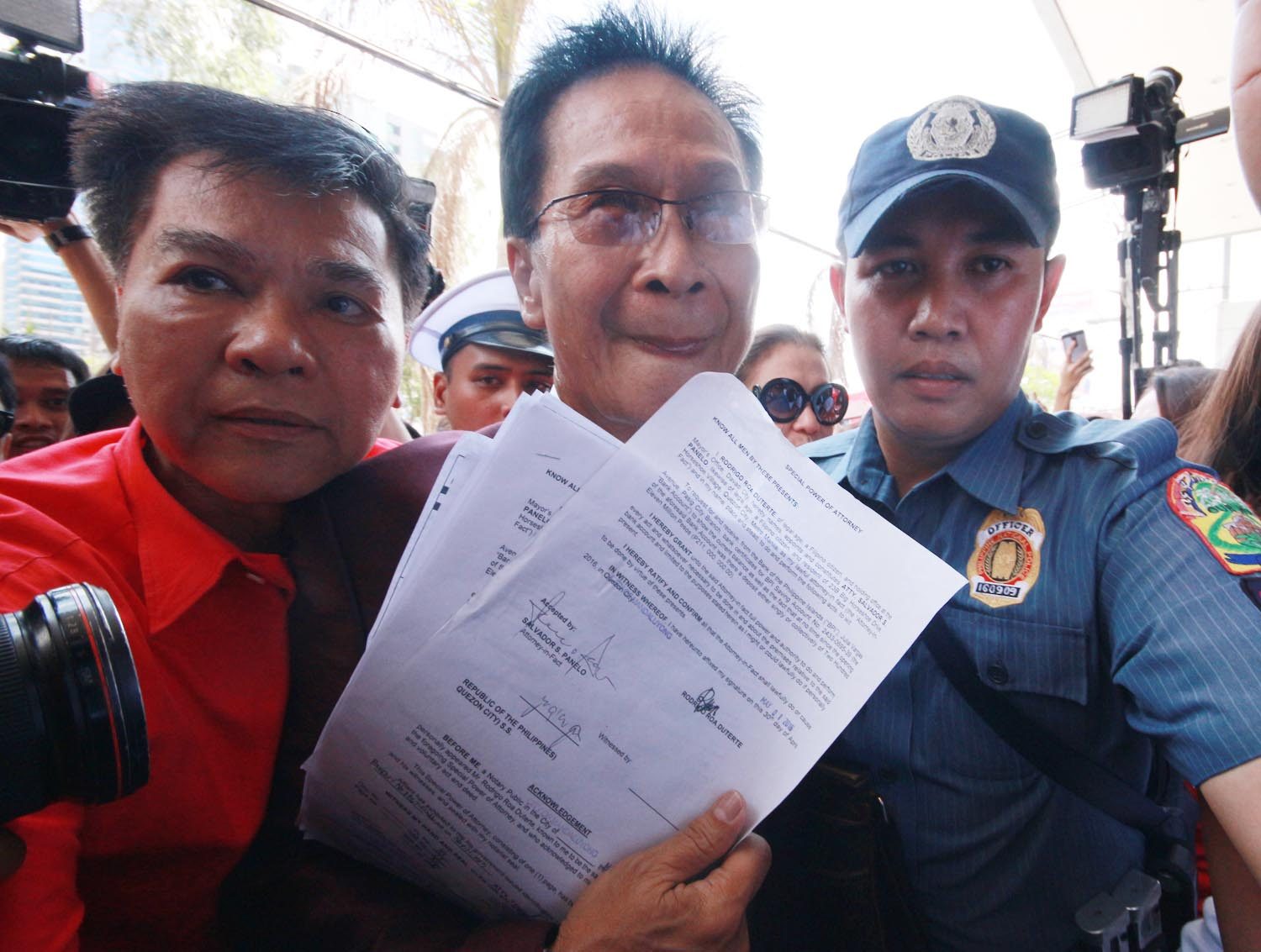 MANILA, Philippines – After spending over two hours inside the Bank of the Philippine Islands Julia Vargas branch, Rodrigo Duterte’s lawyer emerged empty-handed on Monday, May 2.

Salvador Panelo was there to obtain a “certification” from BPI that would prove Duterte’s controversial bank account never held P211 million.

If the 7 days were to exclude weekends, the bank account details would only be disclosed on May 11, two days after election day.

Panelo added that one reason BPI asked for more time is the non-standard wording of the Special Power of Attorney letter signed by Duterte.

(First of all, they said, the certification I’m asking for is not standard. They said they don’t remember ever issuing a certification that a certain amount was never in a certain bank account. I said, go ahead and study it.)

In the Special Power of Attorney, Duterte gives Panelo the authority to “request for and receive, from the Bank of the Philippine Islands Julia Vargas Avenue Pasig Branch, bank certificates for BPI Savings Account No. 2433-0695-39 to show the current balance as well as the fact that at no time since the opening of the aforesaid Bank Account was there a deposit either singly or collectively of Two Hundred Eleven Million Pesos (P211,000,000.00).” Asked why the wording of the letter did not simply ask for a transaction history, Panelo said, “Ah hindi, kasi ang issue ay P211 million eh .” (Ah no, because the issue is P211 million.)

Panelo was joined inside the BPI branch by Senator Antonio Trillanes IV, who granted no interviews with the media at the bank.

It was then that Trillanes handed Panelo his affidavit, conceding to Duterte’s challenge that he issue one.

Panelo said Trillanes’ explanation of how he got the documents detailing the controversial deposits proves how “spurious” the documents are.

In the affidavit, Trillanes said his source is a certain Joseph de Mesa, a former Duterte supporter who has contacts in an agency “involved in investigating ill-gotten wealth of government officials.” (READ: Duterte to AMLC: How is military able to look inside bank accounts?)

The lawyer also said that the affidavit’s attachment, a table full of details of other Duterte bank accounts, does not have the imprimatur of any bank or financial institution.

Panelo said the next step is to wait for the bank to respond to Duterte’s request.

The drama was not confined to the interior of the BPI Julia Vargas branch. Outside, Duterte and Trillanes supporters were engaged in a fierce competition over who could cheer the loudest.

They were shouting “Duterte corrupt!”

Right beside them were Duterte supporters carrying posters chanting their presidential candidate’s name.

Bystanders and other supporters stood on traffic islands in the middle of Julia Vargas Avenue.

Duterte’s campaign team seemed to pull out all the stops. Trucks blaring Duterte jingles and even a Duterte mascot appeared during the long wait.

A middle-aged female supporter of the Davao City mayor said she hopes to deposit some money into Duterte’s account as a show of support.