Duterte to make OFW concerns among his top labor priorities Facebook Twitter Copy URL
Copied
During his Labor Day rally, the Davao City mayor also reminds voters that he is the first presidential candidate to announce his stand against contractualization

In the event on Sunday, May 1, at the iconic Liwasang Bonifacio, he repeated his promise to create an OFW department which would become a one-stop shop for them.

(My first priority is our workers who go abroad. They have such a hard time going to so many agencies. There should be just one department. Those going abroad to work need only go to one building for permits.)

The embattled Davao City mayor spoke with a raspy voice during the rally, yet his supporters were tireless in cheering for him.

Duterte also reminded voters that he was the first presidential candidate to promise an end to contractualization.

Duterte announced his stand on contractualization way back November 28, 2015 – a week after declaring his presidential bid.

But it was only during the last presidential debate on April 24 that the public heard all 5 candidates say they would end the “unfair” labor practice.

Duterte gestured behind him to the historic Manila Post Office which he said could be the building of his planned OFW department.

“Like this building, no one is using it except for mail services. I will transfer them to a small building. I will make this the OFW department, I will give importance to the life, blood, and sweat of OFWs,” he said in a mix of English and Filipino. 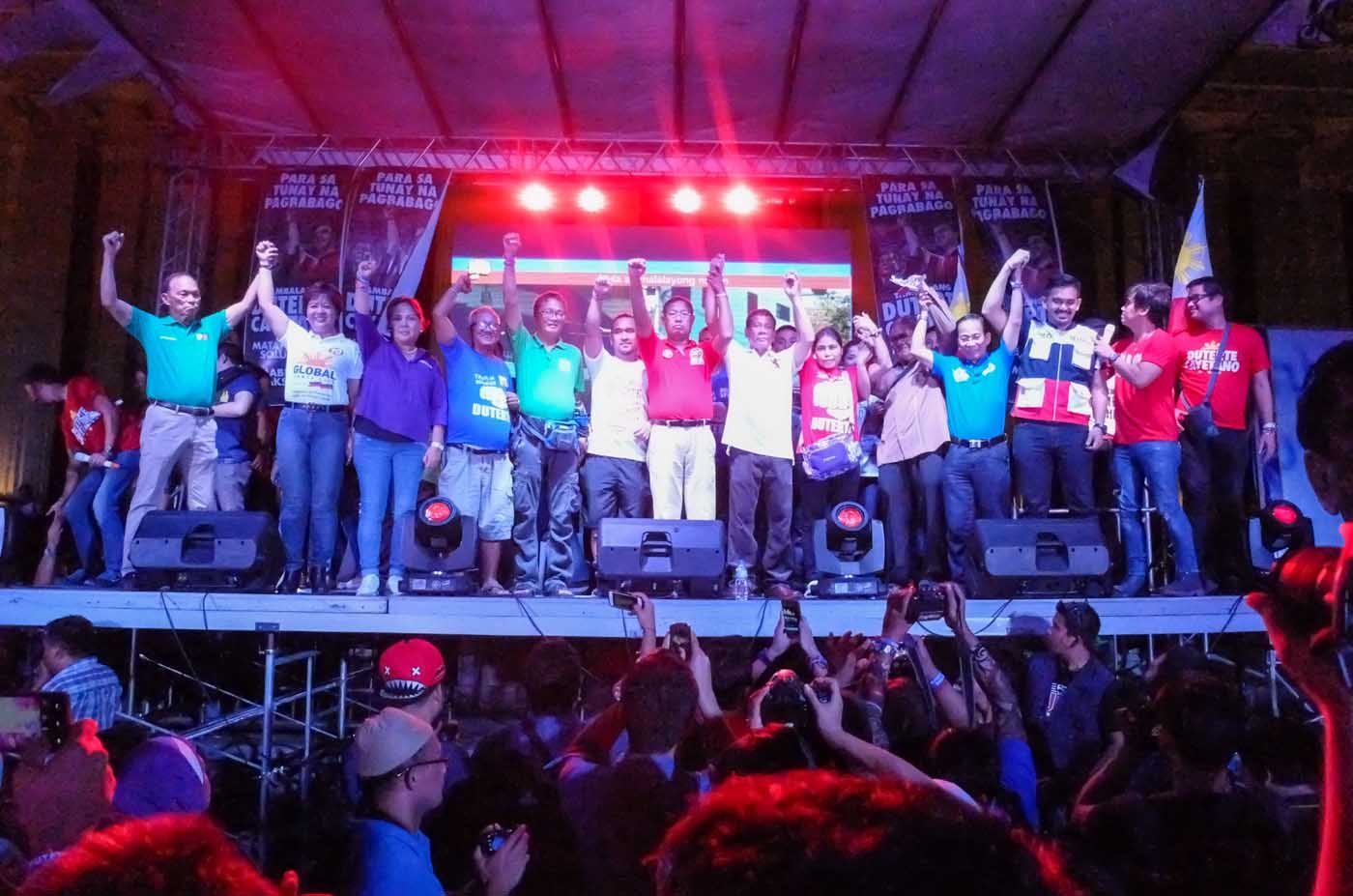 He promised to also streamline government processes “from the Office of the President to the barangay level.”

He also plans to get rid of checkpoints which he said just allows corrupt law enforcers to demand grease money from farmers or businessmen.

“That’s why food is expensive once it gets to the city,” said Duterte.

He repeated his plan to limit infrastructure projects, except those for improving Metro Manila traffic, in order to focus on 3 sectors: education, health, and agriculture.

(I initially won’t have big infrastructure projects, but Metro Manila needs these for the mobility of people. But among all others, I will start with education, health, agriculture. Those are my priorities.)

Some of those who attended Duterte’s rally said they agree with the mayor.

“We believe in Duterte because he is the first presidential candidate to promise an end to contractualization,” said Rodrigo Bersabe, a worker employed by a company that makes pipes.

“In my view, the others just copied him so the workers will also have hope in them. But I’m a longtime voter. All the politicians I’ve seen just make promises. When they are in power, nothing changes,” he told Rappler in Filipino.

A seafarer who declined to give his full name said Duterte promised to fix unfair labor practices in the maritime industry.

Some companies reportedly impose an age limit on the seafarers they hire.

“We older seafarers are not hired back by the companies because they say they have a limit. That is not favorable to us. So we said, all of us seafarers have united, we will vote for Duterte,” he said in Filipino. – Rappler.com