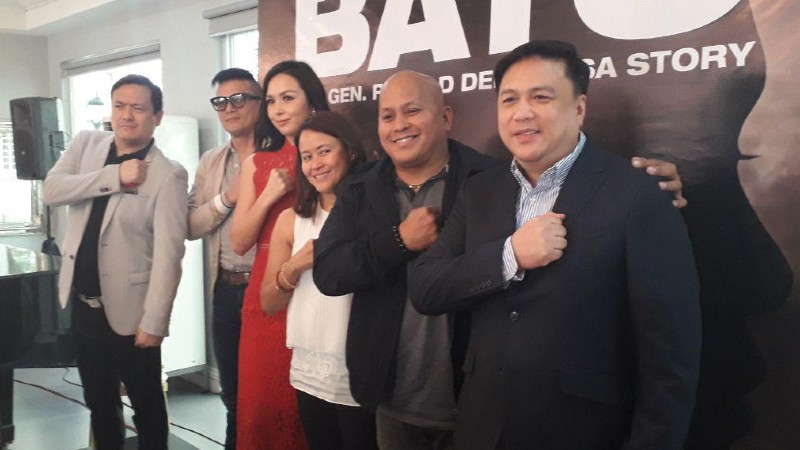 MANILA, Philippines – While the lead star and production team of Bato: The General Ronald dela Rosa Story are careful to downplay the political advantage of releasing a biopic weeks before the 2019 campaign period begins, it’s Ronald “Bato” dela Rosa himself who’s upfront about its perks.

(Let’s be frank – this movie will be a huge help in propping up my candidacy as senator.)

The movie, which stars action star and prominent administration supporter Robin Padilla as Dela Rosa, traces the life of the former police chief – from his youth to his rise as top general of a 160,000-strong police force under President Rodrigo Duterte. Padilla, who repeatedly said he personally looks up to Dela Rosa, said the movie would show the retired police general’s “human” side.

While both Dela Rosa, Padilla, and the team behind the movie see “inspiration” in its story, it’s a sentiment that isn’t exactly universal.

Critics have pointed out that it’s a form of premature campaigning. It, however, skirts legal prohibitions against it because it will hit cinemas on January 30 and will be pulled out just before the official campaign period begins on February 12. (READ: EXPLAINER: Why ‘candidates’ can spend so much and not report it)

The phenomenon of candidates having biopics – released in theaters or television – is nothing new, however. Candidates in the past have had their lives featured in the long-running anthology drama, Maalaala Mo Kaya. (READ: 3 days before campaign, MMK to feature Robredo)

The Fair Elections Act explicitly states that “No movie, cinematograph or documentary portraying the life or biography of a candidate shall be publicly exhibited in a theater, television station or any public forum during the campaign period.” But this is easily avoidable by having the episode air before the campaign period itself or letting relatives be the subject of the episodes.

Dela Rosa was the first PNP chief under Duterte. It was under his watch that Duterte’s controversial campaign against illegal drugs – often called the “drug war” – was launched.

Tens of thousands of deaths have been linked to the campaign against illegal drugs, with evidence pointing to the involvement of cops themselves in extrajudicial killings. It’s an allegation that Dela Rosa, as police chief, had vehemently denied.

A member of the Philippine Military Academy (PMA) Class of 1986, Dela Rosa spent most of his career in Mindanao. It’s there where he met Duterte, then mayor of Davao City.

He served as PNP chief for over two years before he retired. He was then appointed head of the Corrections Bureau. He quit his post when he filed his candidacy for senator.