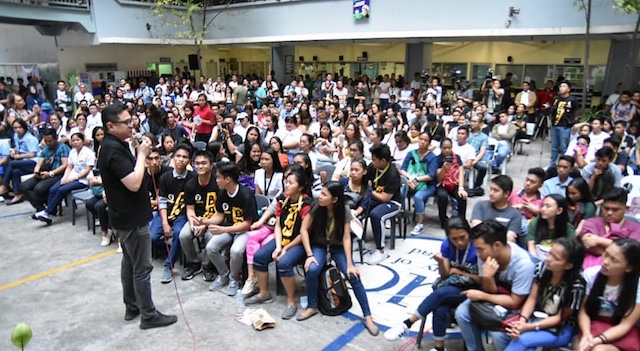 CEBU CITY, Philippines – Students in this city urged fellow voters to do research on senatorial candidates before they fill up their ballots in May.

Students of the University of Cebu-Banilad campus who are registered voters cited the importance of research and a candidate’s track record, when asked by Rappler about the characteristics they looked for in senatorial aspirants.

She said such knowledge should include the kind of changes the candidates pledge to do, as in the case of opposition Otso Diretso candidates who had a dialogue with students at UC-Banilad as part of their campaign sortie in this city on Thursday, February 21. (READ: Otso Diretso ‘realistic’ yet all fired up to campaign in vote-rich Cebu)

Criminology student Hannah Hatamosa said that after listening to the senatorial candidates at the campus that day, it became clear to her, at least, what needs to be done under the current situation in the country.

She explained that research is important to be certain if a candidate deserve to be elected to a national position.

Accounting technology student Gianne Opema, along with some other students, said that of the 8 opposition candidates, she was only familiar with reelectionist Senator Bam Aquino and former interior secretary Mar Roxas.

Opema said this is why they should be given more information on why these candidates should get their votes.

Senior high student Lexter Gerona said that before he attended the Otso Diretso dialogue, he still had no list of candidates in mind. He agreed that knowing a candidate’s track record would be important in deciding who to vote for.

The dialogue itself presented a “big opportunity” to get to know the candidates and their respective platforms, said senior high student John Esparcia.

Esparcia said, however, that he still had yet to make up his mind even after listening to the candidates’ speeches. He said he would have to check out the other candidates first to be sure of his choices.

Another senior high student, Jeca Macalos said of the candidates in their campus that day: “I think they are willing to serve the Filipino people.”

She said she felt the sincerity of the candidates and hoped they would win so that they could realize their platforms.

Accounting student William Aquino said that he agreed with the some of the issues that the opposition candidates want to address such as education, employment, and poverty, but disagreed with them on the issue of the South China Sea and the government’s campaign against illegal drugs.

“To be safe, I will give up the West Philippine Sea,” said Aquino, adding in Cebuano that “the country will have a harder time just because of one territory” since the country is up against China.

Students interviewed by Rappler also want candidates who would not be just all talk, and those who are “fearless.”

The students also want candidates who are honest and untainted by corruption.

Joann Duaban, editor-in-chief of The Thumb, the official school publication of UC-Banilad, said that the only assurance they have as voters, for now, are the words of the candidates, so what she would have to rely on are their track records.

“If ever they get elected in the Senate, they have to think not just of themselves, but about all of us,” she added. – Rappler.com