Macalintal, Tañada challenge Angara: Explain why you pushed for TRAIN 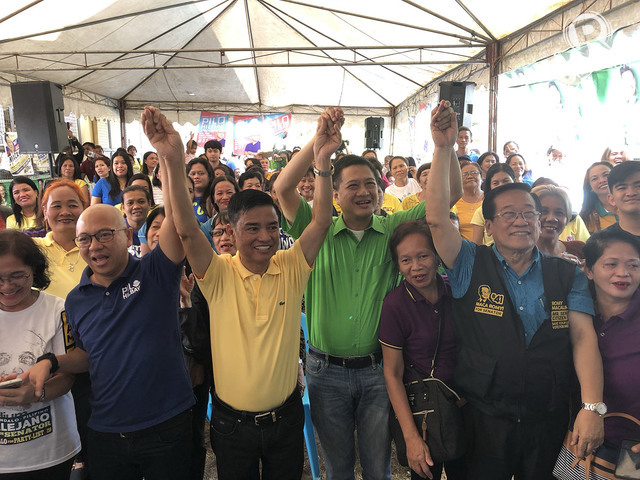 The two opposition candidates went on the offensive against Angara during their town hall meeting with residents of Southville 3 in Barangay Poblacion, Muntinlupa City, on Tuesday, March 5.

They once again challenged Angara and other administration candidates to face them in a debate so they can discuss the most pressing issues in the country, including TRAIN and its effects on the prices of goods. (READ: Sonny Angara fends off TRAIN law criticism as he files COC)

(For example, Senator Angara was the author of the TRAIN law. This law is a burden to the people. Because the fuel excise tax was raised, the prices of basic goods in the country went up. If this is a good law, then Senator Angara should have faced you already, right?)

(That’s why we’re challenging Senator Angara: Senator, perhaps you can explain this TRAIN law and explain why you disregarded our countrymen who are now burdened by your law. He should answer that.)

Debates for candidates doing well in surveys, too

Tañada merely alluded to Angara in his speech, but the former Quezon congressman likewise slammed the senator for pushing for the TRAIN law.

(As stated by Ka Romy, Romy Mac, when it comes to the TRAIN law, we only have one question: You’re saying you’re pro-poor. But why did you allow higher excise tax to be imposed on petroleum products? Because of this excise tax, the prices of gasoline and basic goods increased.)

He previously challenged Angara to a public debate through Twitter, but the latter refused and told Tañada: “#notatmyexpense pards. Rise and fall on your own merits please #kapitlang.”

#notatmyexpense pards rise and fall on your own merits pls #kapitlang

Angara has been landing in the winners’ circle in preelection surveys so far, while Macalintal and Tañada have yet to make it to the so-called “Magic 12.”

Angara, meanwhile, said he has attended only 3 debates so far. He believes he does not have to accept all debate invitations since he is no longer a newbie candidate.

But this is unacceptable reasoning for Tañada.

(Others do not want to debate with us because they already have high rankings in surveys, but that’s not right. We can all write our platforms on paper. We can all stand up in front of the people and discuss our track records.) – Rappler.com