3 barangay officials, 57 others arrested for alleged vote-buying in Makati 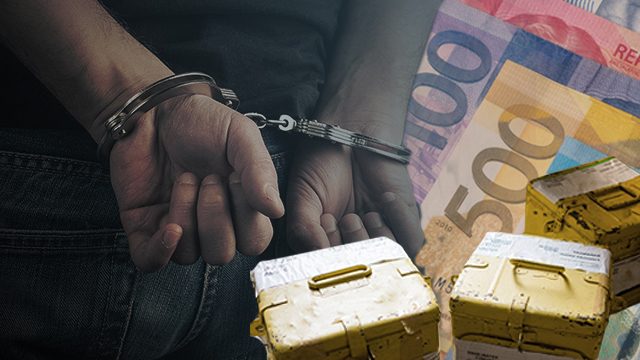 The suspects were nabbed by the National Capital Region Police Office, the Southern Police District Special Operations Unit, and the Makati City Police in an operation at the barangay hall around 10:45 pm on Saturday, May 11, the last day of the official campaign period. (READ: PNP arrests suspected vote-buyers, sellers nationwide)

The suspected vote-buyers are the following:

The police also nabbed another 52 residents of Barangay San Isidro who are believed to have been selling their votes.

(In this barangay hall, they close the lights, ask everybody to come in, then they lock the doors. This is a clear violation of the Omnibus Election Code and they have to face consequences under intervention of public officers. We will refer them to the Comelec and even the DILG.)

The police confiscated from the suspects 820 pieces of P500 bills amounting to P410,000, 19 identification cards, 10 mobile phones, and a list of voters with their addresses and polling precinct numbers.

The arrest happened on Saturday night at the same time mayoral candidate Junjun Binay was holding his miting de avance along Lawton Avenue, where he said his camp has been receiving reports of alleged vote-buying in the city. (WATCH: Newsbreak Chats: Vote-buying beyond just giving cash)

Junjun, who is challenging the reelection bid of his older sister Abby Binay, told Makati voters they should accept the bribe money, but vote for him and the rest of his Team Be Nice slate.

Aside from the warring Binay siblings, other candidates for Makati mayor are Ricardo Yabut (Bigkis Pinoy), Carmelle Alanzalon (independent), and Renato Bondal (independent), who had made corruption allegations against Junjun and his father, former vice president turned Makati congressional candidate Jejomar Binay. – with reports from Rambo Talabong/Rappler.com