IN CHARTS: Registered overseas voters for the 2022 elections VOTE-COUNTING MACHINES. The Philippine Consulate General in Dubai conducts the Final Testing and Sealing (FTS) of vote-counting machines for the 2019 midterm elections on April 6, 2019.

MANILA, Philippines – Over 1.5 million Filipinos overseas have registered to cast their votes in the high-stakes 2022 Philippine elections representing a drop in the number of what the government classifies as “overseas absentee voters.”

With the coronavirus pandemic causing economic disruptions all over the world, hundreds of thousands of overseas Filipino workers (OFWs) flew home. More than 791,000 overseas Filipinos returned to the Philippines in 2020, according to data from the Department of Health.

For the first time since overseas elections were first held in 2004, the number of registered overseas voters has dropped. Even before overseas voters’ registration closed on October 14, 2021, the Commission on Elections (Comelec) had already foreseen the drop in registrations due to the thousands of Filipinos flying home.

While overseas voters decreased for 2022, local registration saw an increase that the Comelec had not seen “in a long time.” Total domestic registrations totaled 65.7 million.

Still, candidates in the national posts – presidential, vice presidential, senatorial, and party list – are in the battle to win over the votes of 1.69 million Filipinos and dual citizens in foreign countries.

Registered Filipino voters abroad will be voting personally or via post at their respective Philippine embassies and consulates during the month-long voting period from April 10 to May 9.

Here’s a look at the overseas voters in numbers.

Note: This chart only shows registered land-based voters per major area, as the Comelec did not report seafarers’ registration in 2019, pending their clarification on the matter.

The total number of registered voters overseas had been on a constant rise – until 2022.

Registered overseas voters were at their peak in the 2019 midterm elections, with 1.8 million.

Of all major areas, only the Asia Pacific region increased in registered voters from 2019 to 2022. All other major areas – the Middle East and Africa, Europe, and the Americas – saw a drop in registrations.

Consistent with the trend since 2007, the Middle East and Africa region recorded the highest number of registrations in 2022.

The United Arab Emirates (UAE) is the most vote-rich country for the 2022 elections.

In the last five elections, the top five vote-rich countries were the same, just switching places with each other over the years: UAE, Saudi Arabia, Hong Kong, Singapore, and the United States.

In 2022, Singapore dropped to the 6th spot as Canada overtook it. (READ: ‘We deserve better’: Filipino-Canadians register to see change in 2022)

These top 10 countries alone are host to 1.3 million voters – around 77% of the entire overseas electorate.

Amid the pandemic-era election, Comelec data shows that more Philippine posts will be conducting postal voting rather than personal voting. However, due to some vote-rich countries opting to conduct personal voting, more voters will end up having to show up at their embassies and consulates. 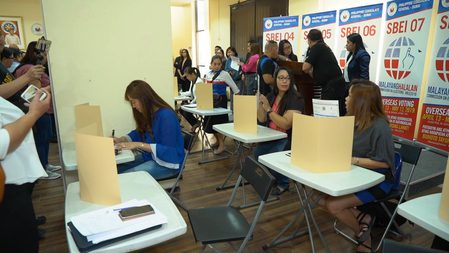 More than 784,000 voters in the Middle East will be participating in personal voting. Meanwhile, in the Americas, most voters will have to mail in their ballots. All posts in vote-rich United States will be requiring postal voting.

Only Europe and the Asia Pacific reported posts that would be conducting both personal and postal voting.

In 2022, almost 20,000 seafarers are set to participate in the month-long polling exercise.

Overseas female voters overpower the male voters this election season, with over 1 million females registered to vote in 2022.

Turnout per major area has not reached even half of registered voters in the past five elections, from 2007 to 2019. At its highest, it was 42.2% among Filipino voters in the Asia Pacific region in 2016. Will more turn up to vote this time around? The overseas electorate has been contributing hundreds of thousands of votes to Philippine national elections since 2004. But as the COVID-19 threat persisted, many OFWs were unable to register in time for the 2022 exercise. – Rappler.com