Duterte endorses 8 other Senate bets not in PDP-Laban list 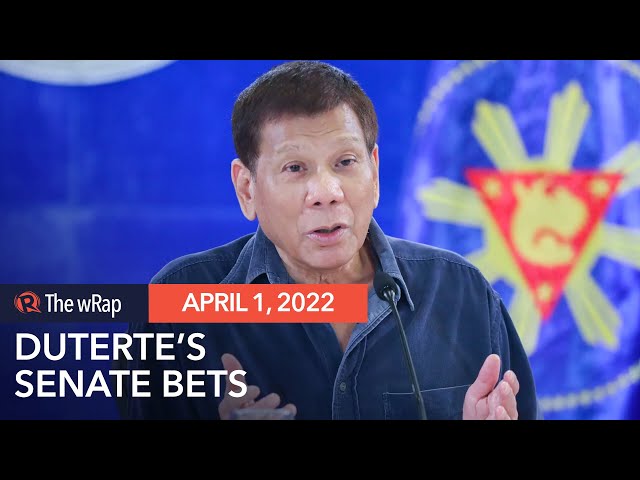 MANILA, Philippines – President Rodrigo Duterte has endorsed eight other senatorial candidates who are not included in the lineup of his faction in the Partido Demokratiko Pilipino-Lakas ng Bayan (PDP-Laban) led by Energy Secretary Alfonso Cusi.

Duterte named them during the grand proclamation rally of PDP-Laban in Lapu-Lapu City, Cebu, on Thursday night, March 31. These Senate bets are on top of the 9 senatorial candidates endorsed by the President and his party.

“So ang ibang kandidato na gusto kong [i-endorse], ’yung may maibigay. Pumili na lang kayo kung sino ’yung magaling,” Duterte said. (So the other candidates that I want to endorse are those who have something to offer. You choose who you think are good.)

Cayetano was Duterte’s running mate in the 2016 elections. In October 2020, Cayetano and Duterte had a “misunderstanding” over the Chief Executive’s directives on the speakership term-sharing deal with the former’s victorious rival Speaker Lord Allan Velasco. (READ: Duterte forgives Cayetano for speakership row, budget blunder – Roque)

In endorsing Estrada, Duterte said that the senatorial bet was a good choice for the Senate. He said the former senator got jailed over a plunder case but was eventually acquitted, referring to the case where his father, former president Joseph Estrada, was the main accused.

“Pero ngayon wala namang nangyari sa kaso. Ibig sabihin walang ebidensya. Eh pinalabas naman. ’Di naman ’to nagnakaw sa totoo lang,” Duterte said. (But now, nothing happened with the case. It means no evidence was found. They let them out. For a fact, he is not a thief.)

Duterte, however, left out that Estrada is still on trial for his pork barrel scam case. He has been out on bail since September 2017, when the Sandiganbayan 5th Division granted his petition for bail. In February 2019, he started seeking an outright dismissal of his P183-million plunder case over the multibillion-peso pork barrel scam.