Facebook Twitter Copy URL
Copied
Only around four out of 10 Filipinos think President Duterte should run for vice president, shows a SWS poll

Six out of 10 Filipinos believe that a vice presidential run by President Rodrigo Duterte is unconstitutional, while only 39% would support that bid, a Social Weather Stations (SWS) survey found out.

SWS conducted its survey from June 23 to 26 through face-to-face interviews with 1,200 adult Filipinos nationwide. It reported error margins of ±3% for national percentages and ±6% for regional percentages. (See full report here for more details on methodology.)

The survey found that 60% of Filipinos agree with the sentence, “The proposal that Pres. Rodrigo Duterte should run for Vice-President in the 2022 election violates the intention of the Constitution, which should first be amended before he may run for office again.”

Only 39% of respondents agreed with the sentence, “Pres. Rodrigo Duterte should run for Vice-President in the 2022 election, because I would like his management of the government to continue.”

Across regions and levels of educational attainment, a majority think Duterte running for vice president violates the constitution.

Among geographical regions, the percentage of people who think this way is highest in Balance Luzon (65), followed by Visayas (59%), and Metro Manila (56%). While the percentage in Mindanao was the lowest, it was still more than half at 53% of respondents in Duterte’s home region.

The same pattern is seen across all levels of educational attainment. Elementary graduates clocked in the highest percentage of people who see Duterte’s vice presidential bid as unconstitutional, with 70% of them saying so. This is followed by 67% among non-elementary graduates, 61% among college graduates, and 52% among junior high school graduates. Filipinos who view themselves as either rich or poor are also mostly against Duterte running for vice president.

According to SWS, the highest percentage of people who think this way was found among those who think they are not poor (64%), followed by “borderline poor” (61%), and by those who see themselves as poor (58%).

Though the lowest percentage among the three, those who rate themselves as poor and oppose Duterte’s vice-presidential bid are still in the majority or account for more than half in their category. 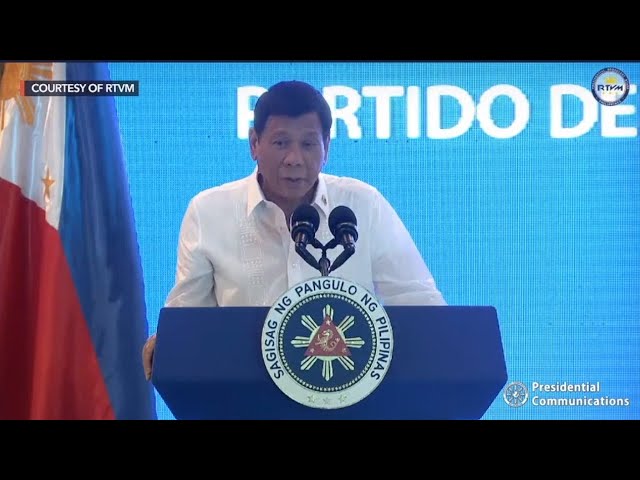 SWS says the survey question asking for people’s thoughts on Duterte’s vice presidency bid was non-commissioned and was done by the polling firm as a public service.

Duterte has accepted his party PDP-Laban’s nomination for him to run for vice president, saying he wanted to continue banner programs like the war on drugs and his fight against corruption. However, he has also said that his VP run is to protect himself from legal suits.

Legal experts and lawmakers also say that while the 1987 Constitution does not explicitly prohibit a sitting president from running for vice president after his term, it goes against the spirit of the charter.

But Christian Monsod, one of the Constitution’s framers, said Duterte’s vice president candidacy bid is an insidious move to circumvent the Constition which was crafted to ensure no president would hold the country’s top post for more than six years.

Analysts are worried that Duterte, with the free hand given by his party to choose the presidential candidate he will run with, would make that candidate step down from the presidency if they both win so that he could become chief executive once more. – Rappler.com