Presidential aspirant Leody de Guzman said if he wins as president, he would support the renewal of the ABS-CBN franchise that was denied under President Rodrigo Duterte’s administration.

(Yes. The ABS-CBN franchise should be renewed because even in the investigations, no lapses werefound on the part of the ABS-CBN. Even the heads of the agencies, the Bureau of Internal Revenue and the Department of Labor and Employment certified that ABS-CBN is compliant.)

De Guzman is the standard bearer of Partido Lakas ng Masa with Walden Bello as his running mate. The tandem seeks to promote a pro-labor agenda and systematic changes in the government.

On May 5, 2020, media giant ABS-CBN went off-air after a cease and desist order was issued by the National Telecommunications Commission (NTC). The commission released the order following the expiration of the network’s congressional franchise.

A House panel later rejected the grant of a new franchise for the network. 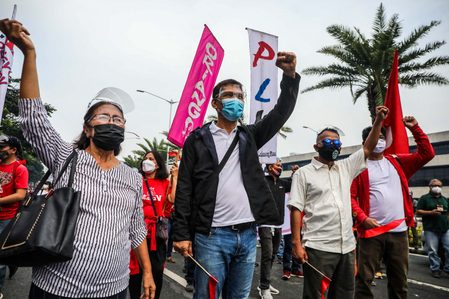 (The truth there is that was Duterte’s personal vendetta in relation to his allegation that his (2016 campaign) ads were not aired. If that’s the case, why shut down the network? Duterte should have sued ABS-CBN so the that the 11,000 employees kept their jobs, and they would have jobs till now.)

As early as 2017, Duterte already warned that he would block ABS-CBN’s franchise renewal. He claimed that ABS-CBN did not air his political ads during the 2016 campaign season, even though they were already paid for.

Dictator’s son Ferdinand “Bongbong” Marcos Jr., is also a presidential aspirant. According to De Guzman, they seek to mobilize members of their party to become a “social media brigade” against disinformation.

A 2020 study released by Reporters Without Borders revealed that supporters of Duterte act like “cyber-troll armies” and use hubs to disseminate fake and malicious content to conduct “targeted harassment campaigns” against opposition figures. – Rappler.com