RESIGNED. Executive Sec. Victor Rodriguez faces members of the Blue Ribbon Committee Tuesday, August 23, 2022, to shed light on the events that transpired in connection with the controversial Sugar Order (SO) No. 4 issued by the Sugar Regulatory Administration authorizing the importation of 300,000 metric tons of sugar.

Facebook Twitter Copy URL
Copied
(2nd UPDATE) In stepping down from the top Palace post, Executive Secretary Vic Rodriguez cites the need to be present for his young family. He says he is set to be President Marcos' chief of staff.

Press Secretary Trixie Cruz-Angeles confirmed this in a social media post shortly after Rodriguez announced on his Facebook page that he had asked permission from President Ferdinand Marcos Jr. to resign from his position.

In the weeks leading to Rodriguez’s resignation, word was going around that the President was looking for a new ES, and that a former Supreme Court justice was among those being eyed.

Rodriguez has become one of the most short-lived executive secretaries, serving the post for just less than three months.

In stepping down as executive secretary, Rodriguez cited the need to be present for his young family. He also said that he would continue serving Marcos as his chief of staff.

“I have asked permission to step down as Executive Secretary. There is nothing more rewarding than answering the call to serve the country, a rare privilege not extended to all but was given to me by the President, His Excellency Ferdinand Romualdez Marcos, Jr.,” Rodriguez said in a statement posted on his Facebook page.

“The work of an executive secretary is a 24/7 job with myriad topics expected to be attended to every day. It demands a sense of urgency which essentially requires almost all of a public servant’s time to ensure that services are met and delivered,” he added.

While holding his work up to a high regard, he said it was “equally valuable” to be present for his growing family.

“Equally valuable, however, is to witness firsthand your young family grow and evolve into how every parent would wish them to become and they most need me too,” he said.

Rodriguez thanked Marcos for his trust and understanding, following his decision.

In a separate statement, Angeles confirmed Rodriguez will assume a new position created through an order just signed by Marcos

“With Rodriguez’s stepping down as executive secretary, he was appointed by the President as presidential chief of staff (PCS), a new position created by Administrative Order No. 1, signed over the weekend by the Chief Executive,” Angeles said.

A portion of the order, quoted by Angeles, read: “The OPCOS shall have the primary function of supervising and ensuring the efficient and responsive day-to-day operational support to the presidency to enable the President to focus on strategic national concerns.”

Rodriguez will still enjoy the rank of a Cabinet member. Angeles added that the former executive secretary will immediately assume the position.

The OPCOS staff will also come from recently abolished agencies: the Office of the Cabinet Secretary and the Presidential Anti-Corruption Commission.

Angeles explained that Rodriguez will now work as the head of coordination for various affairs of the OP. The presidential chief of staff will also be in charge of Marcos’ security monitoring system, “which shall be responsible for providing regular situation reports to the President on a real-time basis.”

Rodriguez will also supervise and coordinate with the Presidential Management Staff, and work with presidential advisers and assistants.

Rodriguez has been hounded by resignation rumors earlier in the Marcos administration. In July, less than a month in his Palace stint, he dismissed rumors that he had quit, when asked about social media posts that circulated that day that he was on his way out.

Ahead of his resignation, a draft order Rodriguez had supposedly prepared “granting additional authority to the Presidential Chief of Staff Victor D. Rodriguez” got thumbed down by Chief Presidential Legal Counsel Juan Ponce Enrile. 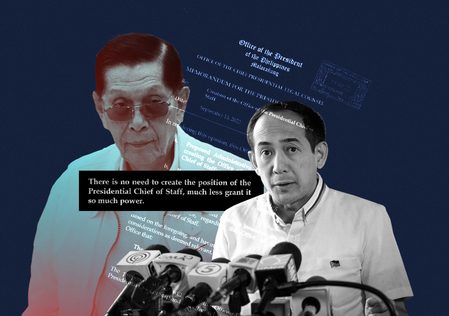 The Senate panel had cleared him of involvement in the botched importation of 300,000 metric tons of sugar, but the Senate minority said that Rodriguez should be held accountable “at least on the moral level,” since he had purposely ignored urgent communication from agriculture officials about the planned importation. – Rappler.com