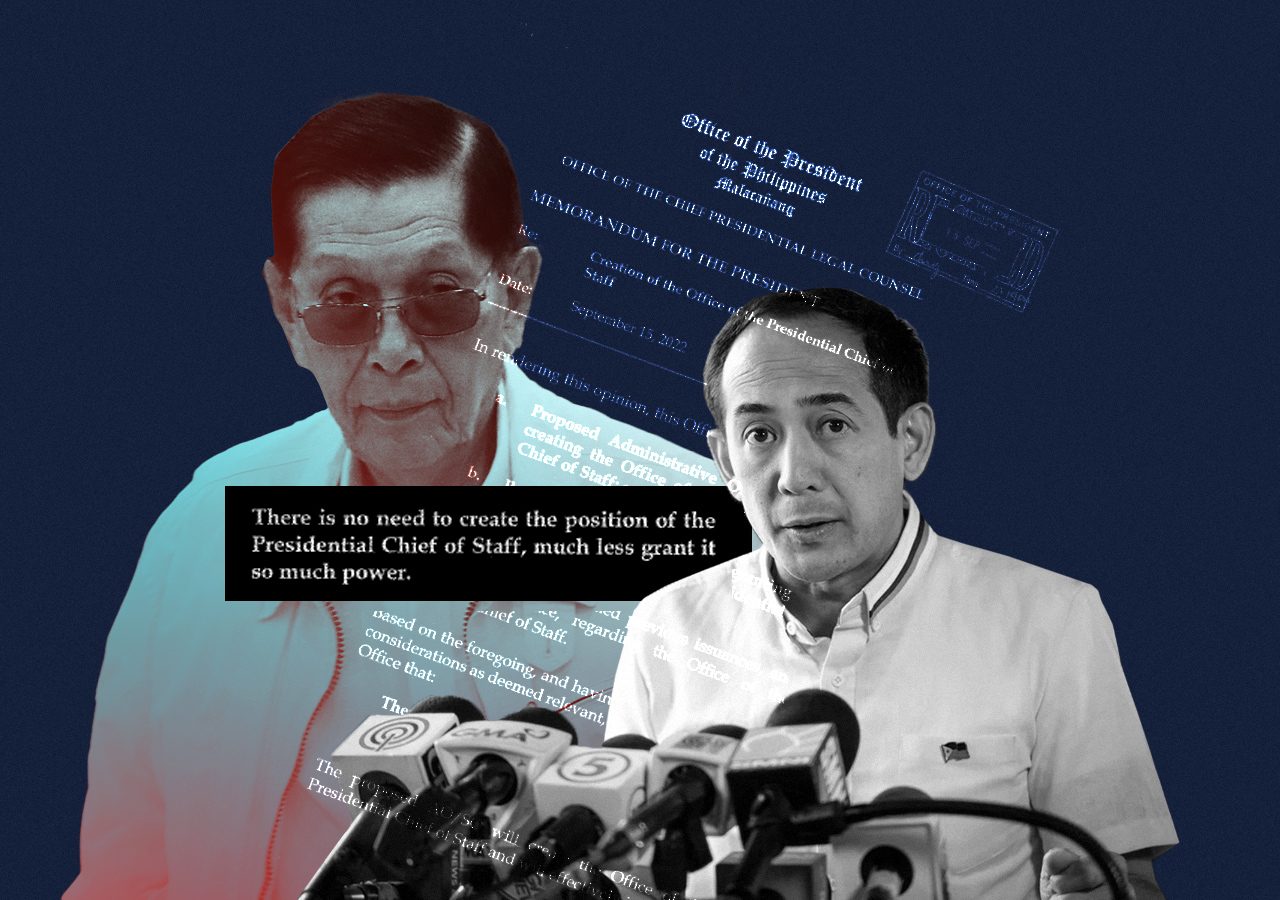 The one-page draft presidential order was screaming conflict of interest.

Prepared in September, the unnumbered “Special Order” was supposed to be for “granting additional authority to the Presidential Chief of Staff Victor D. Rodriguez.”

It was attached to another draft, this one an administrative order “creating the Office of the Presidential Chief of Staff,” listing his roles as “presidential strategist, policy adviser, presidential advocate,” among others.

If you think those functions sound and smell like the presidential Chief of Staff (COS) would effectively be the “little president” – instead of the executive secretary (ES) as tradition would have it – you’re probably right and not alone in thinking so. Malacañang insiders suspect it was Rodriguez’s intention, through that crafty Special Order, to keep the powers he currently enjoys as ES, if and when, he’s designated COS.

The past weeks, word has been going around that Marcos was looking to replace Rodriguez as ES. Several names have been floated, the latest being a former Supreme Court justice.

This was after the well-publicized importation fiasco, where Rodriguez appeared to have failed to inform the President fully, and in a timely manner, about the soundness and urgency of importing 300,000 metric tons of sugar amid an impending shortage.

Administration sources say that was just one of several instances that Rodriguez had been found sitting on matters needing the President’s urgent attention. Not to mention, those more experienced in government service and politics within Marcos’ circle are reportedly of the impression that Rodriguez is still raw for someone expected to effectively backstop the most powerful man in the country.

Not one to mince words, the legal counsel of the President, Juan Ponce Enrile, in a five-page memo to Marcos dated September 15, said: “There is no need to create the position of the Presidential Chief of Staff, much less grant it so much power.”

Citing the history of the said post under several Philippine presidents, Enrile said that, by tradition, the presidential COS “merely assists the President on routine daily functions.”

He stressed that the COS has:

“Being the Legal Counsel of the President, I think I have a legal and moral duty to protect him from those who tend to take undue advantage of his kindness and their seeming closeness to him,” Enrile said last August over another incident.

Remember that it was Enrile, too, who earlier publicly warned Marcos’ allies against “carelessly showing an arrogance of power in our behavior as public persons” especially for people with close ties to the President.

The chief presidential legal counsel is not wont to hold his tongue. “Stop it!!!! If you are authorized by the President, say so. And I will abide by the decision of the President. Otherwise, we will clash,” he warned another presidential ally previously. Was Rodriguez listening?

On Saturday, September 17, however, Rodriguez announced his resignation from his post. This was also confirmed by Malacañang the same day.

Rodriguez has now become one of the most short-lived executive secretaries in the country after serving for less than three months. In explaining his resignation, he said he needs to be present for his young family.

Although Rodriguez had resigned, the Malacañang said the former official would still be part of the Marcos Cabinet as presidential chief of staff. The position was created through an administrative order Marcos Jr. had signed. In the end, it looks like he got what he wanted and Enrile’s recommendation was ignored.

Press Secretary Trixie Cruz-Angeles said Rodriguez will still enjoy the rank of a Cabinet member and will immediately assume the new position. In his new position, Rodriguez will work as the head of coordination for various affairs of the Office of the President. He will also supervise and coordinate with the Presidential Management Staff, and work with presidential advisers and assistants.

Thought bubble: “Sorry Manong Johnny, it looks like you lost this round.” – Rappler.com