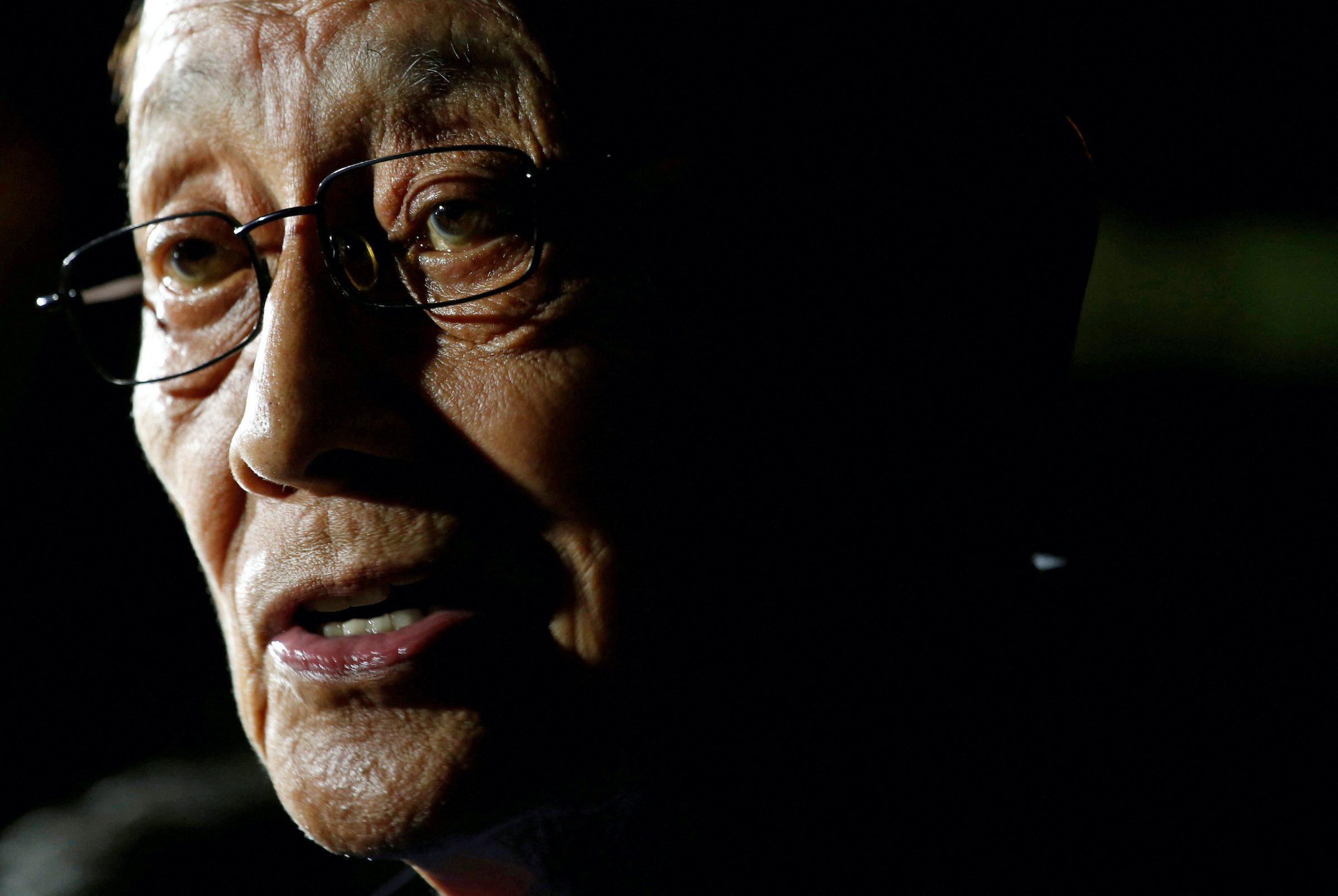 Facebook Twitter Copy URL
Copied
The retired general led the forces that ousted his cousin, the late dictator Ferdinand Marcos, and then made sure to protect democracy in the tumultuous years that followed

MANILA, Philippines – When he ran for president in 1992, many feared that retired Constabulary general Fidel Valdez Ramos would lead like a soldier: top-down, strong-arm, dictatorial. But his six-year term from 1992 to 1998 is best remembered as a period of peace, stability, and economic growth – because he took time building consensus and breaking bread with enemies of the state.

The cigar-chomping FVR – tabako to colleagues and friends – was one of the heroes of the February 1986 EDSA People Power Revolution that ousted his cousin, the late dictator Ferdinand E. Marcos. Ramos’ decision to withdraw his support from Marcos – along with the Philippine Constabulary that he commanded – was the tipping point that fortified the anti-Marcos base within the armed forces.

And while those who ousted Marcos would later demand for more power in the new Cory Aquino government, Ramos stayed true to his oath as military chief and later defense secretary: he quelled all the coup attempts by some of the EDSA forces.

“Steady Eddie” helped guard the country’s fragile post-Marcos democracy and did not flinch in the face of death.

Cory Aquino never forgot that. In 1992, she defied her clan, her political party, and the then-powerful Catholic Church by backing Ramos for president and not the candidate they had asked her to support. Ramos was an aberration in politics then: he was a Methodist, he did not have a political party, and he was a former soldier. He would be the first soldier and Methodist to be elected president in the Philippines’ post-war era.

A soldier-turned statesman, Ramos’ administration was successful in the economic front, opening the country’s economy to foreign investments through deregulation and liberalization policies, breaking up well-entrenched monopolies in the transportation and communications sectors, decisively ending a debilitating 12-hour power outage, and cutting down poverty incidence to 31% from 39% through his Social Reform Agenda.

He pursued peace and reconciliation with all rebel groups – the Communist Party of the Philippines-National Democratic Front-New People’s Army (CPP-NDF-NPA), the Muslim separatist Moro National Liberation Font (MNLF), and rogue military officers belonging to the Reform the Armed Forces Movement-Soldiers of the Filipino People-Young Officers Union.

But not without showing them who was in charge.

Under his presidency, the intelligence community wiped out the top leadership of the communist underground, and brought down NPA strength to slightly more than 5,000 armed regulars, from a high of 25,000 in the early years of Cory Aquino. Ramos would declare the communist insurgency to be on its “irreversible decline.”

He managed to persuade the firebrand MNLF rebel leader Nur Misuari not only to sign a peace agreement with his government but also to abandon the armed struggle completely and run for governor of the then-Autonomous Region in Muslim Mindanao.

Ramos institutionalized the involvement of local government units in the crafting and implementation of national policy and opened the Philippines to the world, in particular to its neighbors in Southeast Asia.

And he defied death. Time and again.

Journalists remember the steady mind and hand of Ramos even when his own life was in danger. He once came out last from a burning Fokker plane after it overshot a runway in Samar, because he made sure everyone had gone out safe first.

In another incident, during a flight from Zamboanga to Cotabato, he would tell everyone that the military aircraft just lost one engine and dropped several thousand feet to regain power. “Everything’s okay, get back to work,” he would say all the time.

In one of his birthdays when he was defense secretary, his helicopter nearly slammed into a mountain minutes after it took off from Borongan, Eastern Samar, due to bad weather. He spent almost a day in a remote farming village infested by communist guerrillas with a handful of nervous security men and had to wait for hours to be rescued by soldiers in a long convoy of armored vehicles.

If he was not cheating death in the field, he would be jogging in the wee hours every morning with his security, and woe to the reporters who could not keep up with his pace.

During his frequent national peace and order council meetings in the provinces as defense chief, he would read, write marginal notes on some newspaper clippings, and would ask questions or comment at the same time. It’s a multitasking skill that left his staff wide awake and alert all the time.

From Pangasinan to West Point

Ramos was born on March 18, 1928, in Lingayen, Pangasinan, but grew up in Asingan in the province’s eastern side where his father, Narciso, served as a five-term member of the House of Representatives and later as secretary of the Department of Foreign Affairs, one of five Southeast Asian ministers who founded the Association of Southeast Asian Nations in 1967.

Ramos attended public schools in his elementary years when his father was still practicing law in Pangasinan. After World War II, he enrolled as a cadet at the United States Military Academy in West Point, graduating in 1950 and joining the Armed Forces of the Philippines as a second lieutenant in the Philippine Army.

When the Korean War broke out in June 1950, he was among soldiers sent to the Korean Peninsula as part of the contingent under the United Nations, distinguishing himself and his unit, the 20th Battalion Combat Team, at the Battle of Eerie Hill in May 1952.

During the Vietnam War, Ramos, then a major, was part of a non-combatant and engineering team of the Philippine Civic Action Group (Philcag) which was deployed near the Cambodian border. It was here where he had cemented lifelong friendships with fellow officers, like generals Eduardo Ermita, Jose Magno, and Jose Almonte.

They were also among the first members of the Philippine Army’s Special Forces Regiment, one of three elite units in the ground forces. The other two are the Scout Rangers, which was organized by another West Point graduate, General Rafael Ileto, and the Light Reaction Regiment, a counter-terrorism unit which was trained and equipped by the United States Special Operations Command in 2000.

Later, when he was commanding general of the Philippine Constabulary-Integrated National Police, Ramos organized in 1983 an elite unit called Special Action Force, which earned the monicker “Sariling Army ni Fidel.”

When Cory Aquino named Ramos defense secretary in 1988, he worked to restore the position to be directly under the president in the chain-of-command under an administrative order. Marcos had removed it, moving General Fabian Ver, his armed forces chief of staff, directly under him in the early 1980s.

Journalists who had covered Ramos during the Cory Aquino years saw his dramatic transformation from a stiff soldier to a civilian bureaucrat and a constantly smiling politician. When he was new at his job at the defense department, he would walk out from his regular press conferences when reporters asked him tough and controversial questions. He would often give long and rambling answers to a simple question that when reporters made transcripts of the press conference, it would turn out he did not give a straight answer and just went around it.

But when he became president, he had by then mastered the art of dealing with the media, cracking “corny jokes” during news conferences and answering questions straight and simple. He learned patience and restraint on the job, and kept his cool when a member of the Foreign Correspondents Association of the Philippines asked him point-blank if the rumors were true that socialite Rose Marie “Baby” Arenas was his mistress.

Among the country’s presidents, Ramos was the most accessible to the press. He always had a Wednesday press conference in Malacañang and would often allow the press to ask him questions during out-of-town and out-of-the-country coverages. He also generously gave one-on-one interviews to both local and international news agencies.

In those times, he never got tired telling us what it would take for the Philippines to take off.

UST, he would say like a broken record: unity, solidarity, teamwork.

He died at a time when that remains a dream for the Philippines. – with reports from Glenda M. Gloria/Rappler.com