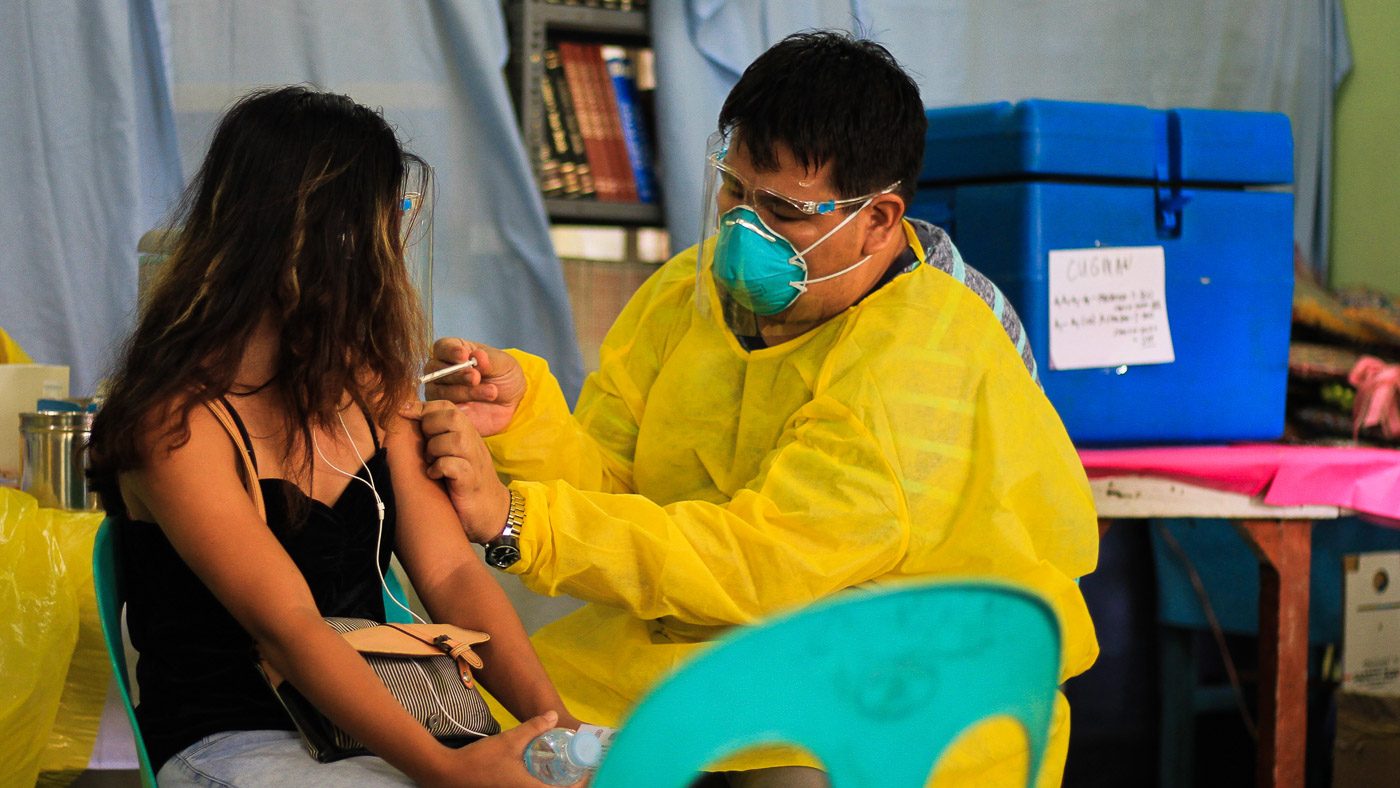 A nurse administers a COVID-19 vaccine to a resident on September 1, 2021, at the newly opened Cugman Elementary School vaccination site in Cagayan de Oro City as the city ramps up its vaccination drive.

Facebook Twitter Copy URL
Copied
A House panel will look into the multi-party agreements and the delays resulting from the unsigned purchase orders on September 7, says Deputy Speaker Rufus Rodriguez

Hundreds of companies and many local governments have sought to buy some 10 million vaccine doses but can’t because the National Task Force (NTF) against COVID-19 has yet to approve their purchase orders, according to Deputy Speaker Rufus Rodriguez.

The bulk of the pending purchase orders were made by some 300 companies across the country that forged multi-party agreements (MPA) with the NTF and the Department of Health (DOH) so they could inoculate employees and their dependents.

Rodriguez said on Thursday, September 2, that several local governments also submitted purchase orders in their efforts to ramp up their respective vaccination rollouts amid the surge in COVID-19 infections.

“The problem is, the purchase orders are left unsigned by the NTF,” said Rodriguez, Cagayan de Oro 2nd District representative.

The Cagayan de Oro City government alone wants to buy thousands of vaccine doses but could not do so despite its budget of nearly P500 million.

“My understanding is they have to regulate the orders to ensure equitable distribution of the vaccine supplies,” Rivera said.

Rodriguez said that the House committee on economic affairs chaired by AAMBIS-OWA Representative Sharon Garin is set to look into the multi-party agreements and the delays resulting from the unsigned purchase orders on Tuesday, September 7.

Rodriguez earlier filed a House resolution seeking an official inquiry into the delays of the vaccine procurements due to government inaction.

A similar resolution in the Senate, filed by Senator Juan Miguel Zubiri, sought a Senate investigation into the delays, he said.

Rodriguez said the national government should be encouraging private sector and local government participation in efforts to secure more COVID-19 vaccines needed to step up mass vaccination rollouts across the country.

He said the only way to create an environment that would allow businesses to recoup their losses, and resuscitate the economy is to achieve herd immunity through no-nonsense mass vaccination rollouts.

“Ours is mainly to ask for transparency on what is happening on our vaccine procurements, and to set the record straight as regards the reported unsigned vaccine orders by the private companies and local governments,” Rodriguez said.

He said he was disappointed because the papers were reportedly “sitting in the desk” and waiting for the approval of vaccine czar Carlito Galvez Jr. apparently because there was a “lack of supply on the part of vaccine manufacturers.”

‘We feel abandoned by the national government’

Naga-based Kenneth Isaiah Abante, a coordinator of civil society group Tarabangan Kontra COVID, said local governments were willing to adjust to the national government’s choice of vaccines, but the “national government has been unfair” in terms of the vaccine supply distribution.

“We, volunteers and front liners in the provinces, feel abandoned by the national government,” he said.

Abante, who has been doing data research on the government’s COVID-19 response, said many vaccines were not reaching the provinces, the national vaccination has drastically slowed down, and that “millions of stocks are left unused.”

“They should let LGUs know at the soonest if the multi-party agreements will be rejected or delayed until next year; otherwise, the funds will be parked – money that could be used for other priority pandemic response programs. Time is of the essence. Delta is surging. Many of our loved ones are getting sick or dying,” Abante said.

In Cagayan de Oro, city hall ramped up its mass vaccination rollout as Moreno set a high target for the city’s public health workers: inoculate 71.1% of all the residents by the end of September.

Rivera said the city government has been receiving more vaccine supplies from the Inter-Agency Task Force for the Management of Emerging Infectious Diseases (IATF). She could not provide specific data.

The two were the latest additions to the city government’s 11 vaccination sites .

Many, including several people in his circle, saw Moreno’s September target of inoculating over half a million of Cagayan de Oro residents as ambitious.

In August, Moreno wrote to vaccine czar Carlito Galvez and asked for 240,000 vaccine doses a month so that city hall could increase the inoculations to 8,000 daily in the hope of making the city reach herd immunity status in 100 days.

He told Galvez some 80 vaccination teams would be deployed throughout the city to carry out an accelerated vaccination rollout plan provided that Cagayan de Oro stopped receiving the vaccine supplies in trickles.

As of August 31, the city government had fully vaccinated 94,620 residents while 200,065 others awaited their second doses.

Cagayan de Oro health chief Dr. William Bernardo said the City Health Office’s original target was to inoculate at least 5,000 people a day, but with the new vaccine centers in Cugman and Bulua, they hoped to increase the number by 1,200 more.

At the Cugman Elementary School vaccination site, health workers have so far been inoculating from 500 to 700 people daily, said nurse Marilou Dubria who leads a team of about 70 in the eastern village.

“Some residents still choose to go to the malls for their vaccination. Personally, I like it here because it is an open-air vaccination site,” Dubria said.

“We need to hire more to accelerate our vaccination,” he said.