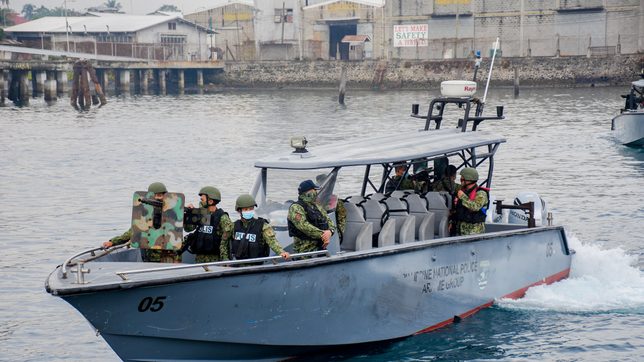 Facebook Twitter Copy URL
Copied
'We know our shorelines are open to anyone who wants to slip through,' says General Santos City Mayor Ronnel Rivera, in explaining the creation of Task Force Dalampasigan

General Santos City officials are keeping a close watch over villages along their coastline close to the Indonesian border to catch people from Indonesia and even Malaysia who may sneak into the country via the southern backdoor.

The move was carried out to prevent the spread of the Delta variant of COVID-19, which has become the dominant variant in Indonesia.

The city government launched on Friday, August 5, Task Force Dalampasigan consisting of military and police units along with several government agencies and barangays units to help monitor the illegal and unregulated entry of people from neighboring areas.

General Santos City Mayor Ronnel Rivera created the task force through an executive order that states that sub-groups will be responsible for intelligence and investigation, security operations, logistics, shoreline patrol, and coastal surveillance.

“We know our shorelines are open to anyone who wants to slip through. That’s why we formed this task force,” Rivera said.

But the head of the Regional Maritime Unit (RMU) said he was worried about the sustainability of the move of the city government, saying that a task force usually has a lifespan of six months.

Lieutenant Colonel Fernando Cunanan said they were already performing the functions of the task force even before its creation.

“It is in our mandate to protect the coastline, and we are equipped to do that,” he said.

He said they have mobilized a special body consisting of officials of coastal barangays not only in General Santos but in the entire Region 12, just to be certain that no one from the neighboring countries could sneak in.

“Anyway, even if the task force is dissolved, the maritime group will still be here,” Cunanan said.

Rivera said he was aware that there were maritime agencies monitoring and patrolling but these were for different reasons.

“This time, we want to include guarding against the entry of people who were not screened,” said Rivera who serves as the commander of Task Force Dalampasigan.

“Basically, what we are doing is consolidating all the offices and government agencies tasked with monitoring our coastal areas like the PNP Maritime Group, the Philippine Coast Guard, Bureau of Immigration, BFAR, and coastal barangays. We are setting up a mechanism with lateral interaction so that we can incorporate their regular duties with our campaign against COVID-19 and its variants,” Rivera explained.

Acting on orders of Philippine National Police chief General Guillermo Eleazar in line with the rising cases of the more contagious Delta variant, Cunanan said they conferred with barangay officials along the coastal fringes of Sarangani Bay.

“Supposedly, this will complement our continuing intensified patrols in the city’s coastal waters,” Cunanan said.

He said they have doubled their security patrols in the city and neighboring Sarangani province since July because of the Delta variant threat.

Cunanan said they identified the barangays where motorized boats from Indonesia have been docking since the Makar port is closed to such activities.

“We have received confirmed reports that there were travelers from Indonesia who were using alternate ports in these barangays,” he said.

Cunanan said they have been checking boats entering the area to see if these came from nearby islands in Indonesia, and telling those who came from Indonesia to turn around.

This city and nearby Sarangani province is the favorite destination of residents from various islands along the Philippine-Indonesian border which is only about an hour and a half away by speed boat. – Rappler.com

Rommel Rebollido is a Mindanao-based journalist and an awardee of the 2021 Aries Rufo Journalism Fellowship.