'STOP THE ATTACKS.' Lumad groups led by the Save Our Schools (SOS) Network, stage a protest at the Commission on Human Rights office in Quezon City on Monday, February 15, 2021, to denounce the attack and arrest of 25 Lumad students, teachers, and elders at a Bakwit School located at the University of San Carlos in Cebu City. 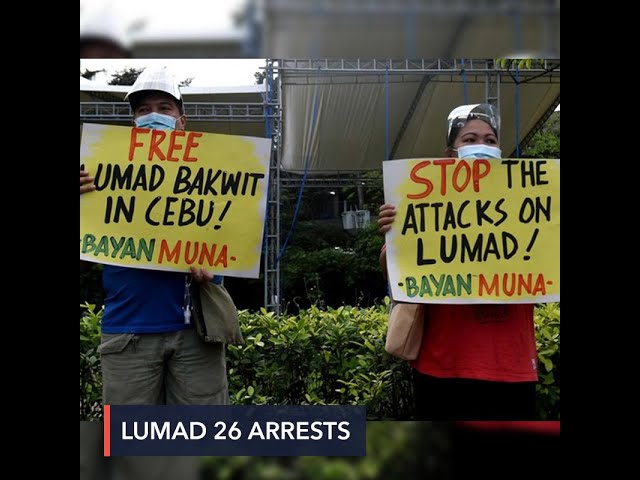 Human rights groups slammed the raid on a Lumad school in Cebu City that led to the arrest of 26 members of the school early Monday, February 15.

“What kind of rescue operation involved force and coercion by uniformed elements like the PNP, knowing that these students were victims of forced evacuation amid military and paramilitary operations in their indigenous people’s community in Talaingod, Davao del Norte?” Karapatan secretary-general Cristina Palabay said in a statement.

“The Lumad students were obviously in distress as they were forced out of the Lumad school in Cebu, despite and even with the presence of their parents,” Palabay added.

A video posted by the Save Our Schools (SOS) Network showed how the children who were staying at the University of San Carlos (USC) Talamban Campus were screaming as police forcefully took them away. “The Lumad school children along with teachers and elders had sought refuge at USC as these same state forces and paramilitary members had threatened to kill teachers and students that forced them to leave their ancestral communities and sought refuge in the cities,” the SOS said.

“The USC had shown solidarity, and this continues in this time of the COVID-19 pandemic.”

The Lumad school located at the USC Talamban Campus has been there since March 2020.

According to the university, the children were supposed to return home in April 2020 but got stuck on campus due to the pandemic. The USC and members of the Societas Verbas Divini Philipines Southern Province also denied the students were “held captive.”

The Philippine National Police (PNP) said in a statement sent to the media that the students who were being housed at the Catholic school’s grounds were being held to “undergo revolutionary training as future armed combatants.”

“Some of the children told WCPD investigators that they underwent some form of warfare training while in the custody of their handlers,” the PNP said, without substantiating their claim.

“Clearly, the claim to conduct a ‘rescue operation’ holds no water as this is a forced intrusion and threat to the democratic spaces within the university,” Akbayan Cebu said.

The arrests of the 26 Lumad students and teachers – collectively known as the “Lumad 26” – come less than a year after police violently dispersed a protest and arrested 8 activists at the University of the Philippines Cebu last June 2020.

It was initially reported that 25 individuals were arrested in the raid, including two teachers and a community elder (datu). However, the National Union of People’s Lawyers (NUPL) Cebu Chapter, who are representing the detained individuals, clarified that a total of 26 Lumads were detained in the arrest.

“These recent attacks from state forces are pertinent to the long line of grave harassment and intensified operations that the indigenous peoples have suffered under the Duterte administration,” Akbayan Cebu added.

The school administration of the University of San Carlos clarified in a press conference Monday evening that the police did not coordinate the operation with them.

The National Union of Peoples’ Lawyers (NUPL) Cebu Chapter will represent the 25 individuals arrested by the Central Visayas police.

“NUPL CEBU will be representing the persons rescued and arrested today. We will provide and file the necessary responses once we receive the official complaints from the arresting officers,” the NUPL said in a statement Monday evening.

“We would just like to assure the safety of our clients after the traumatic event they have experienced today and make sure that their right to counsel will be recognized and respected,” they added.

As of this writing, members of the NUPL told reporters they have yet to meet with their clients, who are being held at the Philippine National Police’s Central Visayas headquarters. – Rappler.com