INSPECT. Police check on a security group of an agricultural firm in a Bukidnon town where presidential bet Leody de Guzman and Manobo farmers were fired at on April 19, 2022. 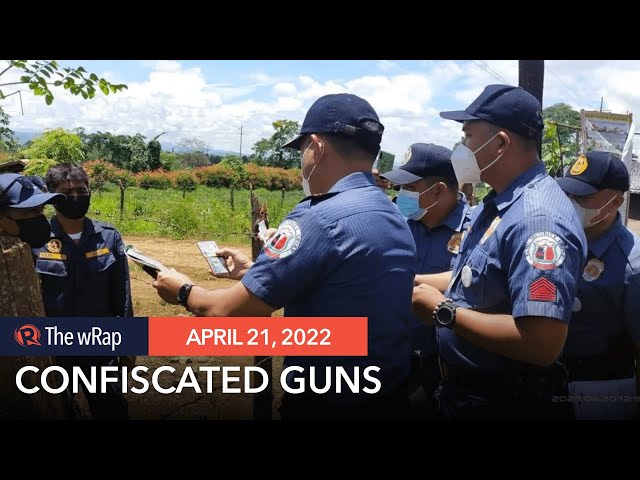 CAGAYAN DE ORO CITY, Philippines – Police seized firearms from the security group of an agricultural company believed to be behind the shooting of the group of presidential candidate Leody de Guzman and Lumad farmers in Bukidnon on Tuesday, April 19.

Olaivar said inspectors found that five members of the security group were unlicensed and not wearing uniforms.

Neither did the guards show any certificate of authority from the Commission on Elections (Comelec) to prove that they were exempted from the gun ban that took effect on January 9.

But on Thursday afternoon, April 21, Olaivar said investigators got hold of copies of documents to show that the seized guns were licensed.

Olaivar said the firearms were sent to the PNP Crime Laboratory in Camp Evangelista in Cagayan de Oro to check if the guns were recently fired.

She said police were looking for more firearms since a team from the PNP-10 Scene of the Crime Operatives (SOCO) found empty 5.56 caliber shells – presumably from an M16 rifle – at the crime scene in Sitio Kiantig, Barangay San Jose in Quezon town.

De Guzman, who was in Bukidnon to campaign, said a group of 50 armed men believed to be security guards fired a volley of shots at them.

He said he was with some 500 Manobo-Pulangiyon farmers who went to the area to assert their claim over some four hectares of the more than 900 hectares occupied by KDC in Sitio Kiantig.

Five people were hurt, including two of De Guzman’s aides, when they were shot at after the group waved a white flag to send the message that they came in peace.

De Guzman was accompanied by two senatorial hopefuls, Roy Cabonegro and David D’Angelo, who were unscathed.

But one of their companions, Nanie Abela, was hurt.

Abela said the guards did not fire warning shots. “They aimed at us,” Abela said.

Olaivar said one of those wounded was a female who was still confined in a hospital and waiting for a bullet to be removed from her right leg.

Abela, meanwhile, said a bullet that hit him in the right shoulder was removed already, but he was still recuperating.

De Guzman said Army soldiers and police officers were just about 100 meters away from his group but they did not quickly respond.

Olaivar said the police cannot file a criminal case against suspects unless De Guzman’s group or the Lumad farmers file a complaint.

In an interview with OnePH on April 21, Brigadier General Benjamin Acorda, PNP regional director, urged the victims and witnesses to cooperate, and trust the police.

“I want the investigation of this case to be solid so that it won’t just be dismissed. We assure the witnesses and victims that the police would remain neutral,” Acorda said during the interview.

Police said KDC is being managed by one Marco Lorenzo.

The mayor of Quezon town, Pablo Lorenzo III, told Brigada News FM in Cagayan de Oro that he used to work for the company until his election as Quezon town mayor.

Lorenzo said he had just met with the Commission on Indigenous People (NCIP), the Lumad farmers, and the police on April 18, the day before the incident, to thresh out issues about the disputed property.

Lorenzo denied his men were involved in the shooting incident.

“Dili na akong tawo (They’re not my men). Tingali (Maybe), they’re confused because I used to work there. Pero dugay na kong mingbiya (I left a long time ago)…. Way koy labot ana (I had nothing to do with that),” Lorenzo said.

Bishop Noel Pedregosa of the Catholic Diocese of Malaybalay City condemned the incident and urged all stakeholders to engage in a dialogue “for the sake of peace and the integral and sustainable development of the Lumad.”

“The Lumad have rights over their ancestral domains which, for many years, they have been deprived of,” Pedregosa said. – Rappler.com