Facebook Twitter Copy URL
Copied
The relatives and a paralegal team have decided to stay at the funeral home to ensure that they can claim the bodies on Thursday, March 11 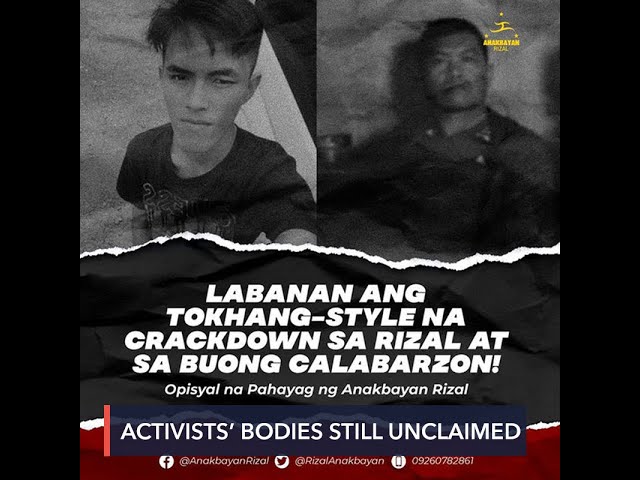 Police and military in Antipolo, Rizal, barred the families of 4 activists killed in the “Bloody Sunday” operations from claiming the bodies from the Antipolo Memorial Homes on Wednesday night, March 10, according to lawyer Kathy Panguban of Karapatan Timog Katagalugan.

Their bodies have been there since Sunday, March 7. The four were killed in a series of raids in Calabarzon that saw the deaths of 9 activists and the arrest of 6 others.

Panguban also said that the families, along with the paralegal team of Karapatan, were being harassed by the state forces.

Lawyer Maria Sol Taule of the National Union of Peoples’ Lawyers said that a fire truck was parked right at the gate of the Antipolo Memorial Homes, where the bodies remain under police custody.

The relatives and paralegal team decided to stay at the funeral home to ensure that they could claim the bodies on Thursday, March 11, according to Karapatan.

A report by CNN Philippines showed photos of religious sisters providing food for the families and initiating a vigil while outside the funeral home.

Rappler tried to reach the police for comment but they cannot give a statement as of this posting.

Rodriguez town police chief Christopher dela Peña had earlier said they were not withholding the bodies and that they were only requiring clearance to make sure that the claimants were legitimate family members. – Rappler.com