BRUSSELS, Belgium – House Speaker Ferdinand Martin Romualdez said on Tuesday, December 13, that certifying the the controversial Maharlika Investment Fund as urgent legislation will be be up to his cousin, President Ferdinand Marcos, Jr., even if it was him who apparently came up with the idea in the first place.

Romualdez, who is part of the delegation to the Association of Southeast Asian Nations (ASEAN)-European Union (EU) Summit in Brussels, was asked if Marcos would be certifying as urgent a proposed law that would create the Philippines’ first sovereign wealth fund.

“If you ask me, why don’t we just certify it as urgent so if you go to Davos, we can just talk about having a sovereign wealth fund passed through the House of Representatives. That will be a very, very exciting thing,” Romualdez told reporters in Brussels after the President skipped his scheduled media briefing. 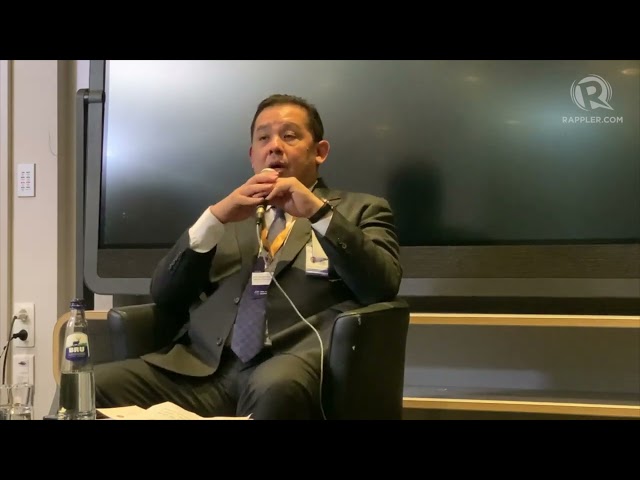 The House Speaker was referring to what is now being dubbed the Maharlika Investment Fund, which is going through the House of Representatives at record speed.

Romualdez was also referring to the World Economic Forum in Davos, Switzerland, a days-long event that brings together the biggest names in politics and business “to shape global, regional and industry agendas.”

A sovereign wealth fund is a state-owned and -managed investment fund that’s meant to grow a country’s wealth.

But the proposal in the House of Representatives has been controversial from the get-go.

Lawmakers have since tweaked these controversial parts of the law, such as removing pension funds as a source of seed money and changing the Maharlika Investment Corporation chairman from the President to the finance chief.

Marcos, days prior, expressed his commitment to the proposed fund, after days of being mum about it.

While authorship of the bill has grown to more than two-thirds of the House, its original authors include those who are closest to the President and the lower chambers’ top officials.

Romualdez defended the Maharlika fund, saying “the timing is definitely now.” Ironically, critics have pointed out that now is the worst time for a wealth fund – when the global economy is a mess and regular Filipinos struggle with the rising cost of basic goods.

“To the naysayers, unfortunately we in the House of Representatives are here… we are actually paid to look at the situation of the country and improve the lives of the people and you see that this is a very, very good vehicle,” he said.

While a counterpart measure has yet to be filed before the Senate, Romualdez said Senator Mark Villar, who is also part of the delegation to Belgium, will be using the bill as “refined” by the House, as a “starting point.”

In order for a bill to become a law, it must be approved by the two chambers of Congress – the House and the Senate.

Marcos and Romualdez are in Brussels for the ASEAN-EU Commemorative Summit and other side events. Marcos, said his cousin, had developed a cold after two days in below freezing temperature, but is still expected to participate in the summit on December 14.

Marcos is also set to hold bilateral meetings with the EU and nine European countries on the 14th. – Rappler.com