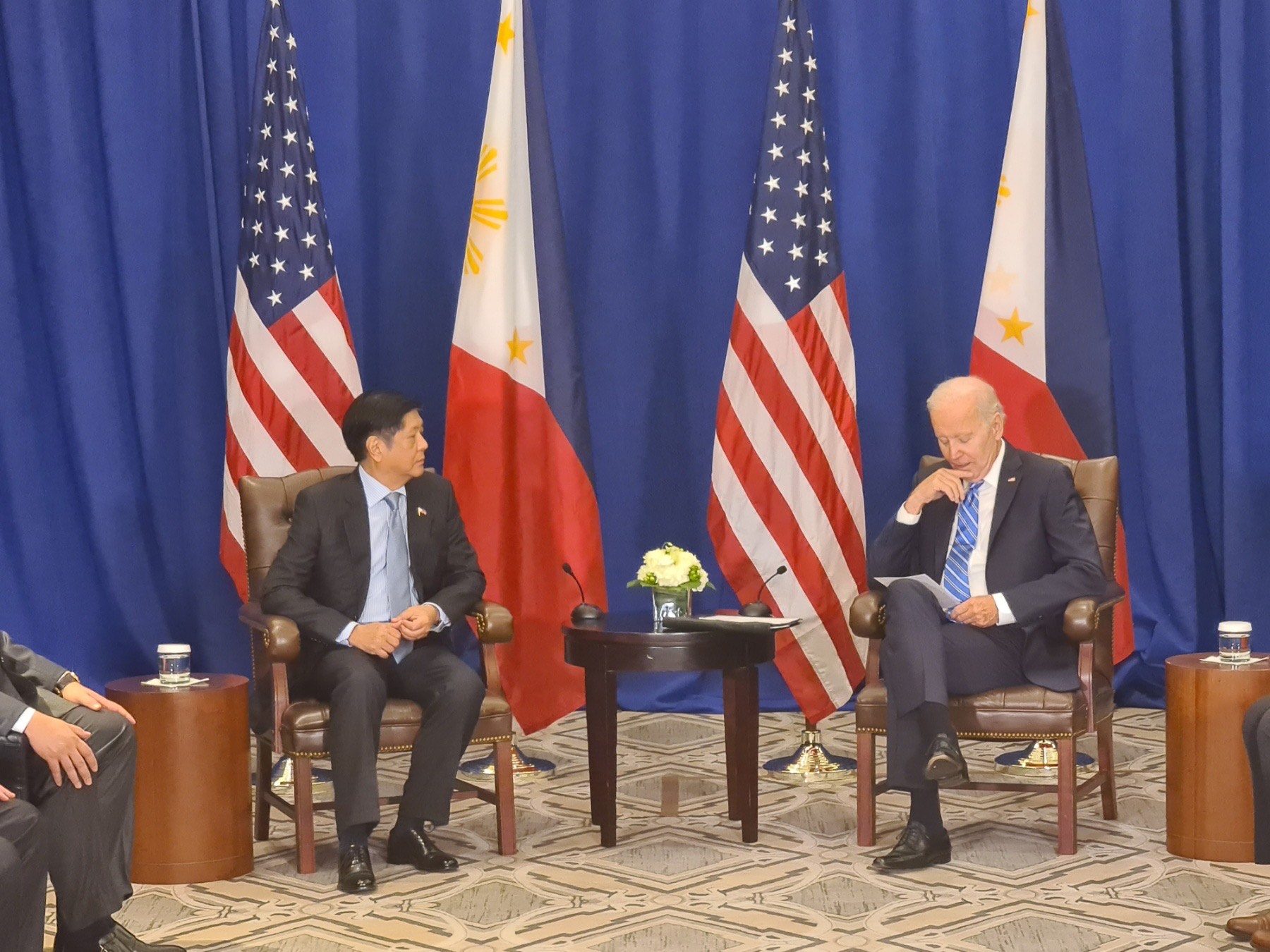 ALLIES. Philippine President Marcos meets Joe US President Biden on the sidelines of the UN General Assembly on September 22.

In their meeting, Biden said the relationship between the Philippines and the US is “critical,” with the US leader saying this word at least thrice in the first minutes of his bilateral talks with Marcos.

“We’ve had some rocky times but the fact is it’s a critical, critical relationship from our perspective. I hope you feel the same way,” said Biden in their meeting.

Most critical, going by the way Biden phrased it, was the South China Sea dispute.

In a readout, the White House said: “The leaders discussed the situation in the South China Sea and underscored their support for freedom of navigation and overflight and the peaceful resolution of disputes.”

The feeling – of reliance and trust –  is certainly mutual.

“The role of the United States in maintaining the peace in our region is something that is much appreciated by all the countries in the region and the Philippines especially,” Marcos told Biden.

“Our bilateral alliance with the United States is possibly as important a policy as there is in the Philippines,” Marcos also said on September 18, before an audience of Filipino-Americans in New Jersey.

The Philippines-US meeting was the second bilateral meeting for President Marcos during his six-day working visit to New York City.

Marcos and Biden met against the backdrop of several world crises. There’s the COVID-19 pandemic, Russia’s war against Ukraine, and the economic and food supply that it’s been causing.

There is, too, the matter of Marcos’ immediate predecessor – the loud and rambunctious Rodrigo Duterte, who made a hobby out of cussing out the likes of the US and the United Nations over their criticism on his war on drugs.

Duterte also championed his so-called “pivot” to China, but experts have said this has not paid off.

Marcos, in his six-day working visit to the United States and appearance before the UNGA, has made it clear: the Philippine is readjusting to its old configurations.

In almost all of his business events, the battle cry is almost always the same: Investors are curious, and possible investors are already in the works.

Before the UNGA, Marcos championed the UN Convention on the Law of the Sea while also skirting around a direct mention of China and of the Philippines’ legal win over China in the dispute waters.

In a separate readout about the Marcos-Biden meeting,  the White House said the two discussed “the importance of respect for human rights.” Neither the White House nor Malacañang have gone into detail about the two presidents’ discussions.

It’s a striking statement, given Marcos’ personal and political history.

His father is Ferdinand Marcos, the late president who was ousted from Malacañang after holding on to power for two decades.

The two also touched on different issues during their sidelines meeting, including climate action, energy security, infrastructure, regional issues, and the crisis in Myanmar.

Biden had earlier invited Marcos to visit the US through Second Gentleman Douglas Emhoff, who led the US delegation to the Marcos inauguration. Emhoff is the husband of US Vice President Kamala Harris.

Malacañang has yet to announce whether a state visit or official visit to the US is in works for Marcos.

While in New York, Marcos has attended several meetings — from a gathering with Filipinos from the tri-state area, to Canada and in New Jersey, to meetings with top US-based companies across different hotels in the Big Apple.

This is also the Philippine President’s first publicly-known visit to the US in more than a decade. Marcos, son and namesake of the late dictator, has a standing contempt order issued by a US court over a human rights class suit against the first Marcos president.

As head of state, however, Marcos is accorded diplomatic immunity — something the US had assured of shortly after Marcos won the May 2022 polls.

The US and the Marcos clan have a long and colorful relationship. The US government supported the first Marcos regime, until a people’s uprising sent the family packing into exile. Still, it played host to the Marcoses while they were in exile.

It’s in New York City, too, where Marcos met now First Lady Liza Araneta-Marcos — she was a young lawyer then and he was attending to cases filed again his mother, former first lady Imelda.

Shortly after Marcos won the 2022 Philippine elections, Biden was the first world leader to reach out and congratulate him on his landslide victory.

The meeting between the two leaders embodies what some analysts have described as a “restoration” of ties, after relations fell to a marked low under Marcos’ predecessor, Rodrigo Duterte.

The former Philippine president refused to visit the US and often railed against Washington for criticism against his bloody drug war. – with reports from Sofia Tomacruz and Reuters/Rappler.com