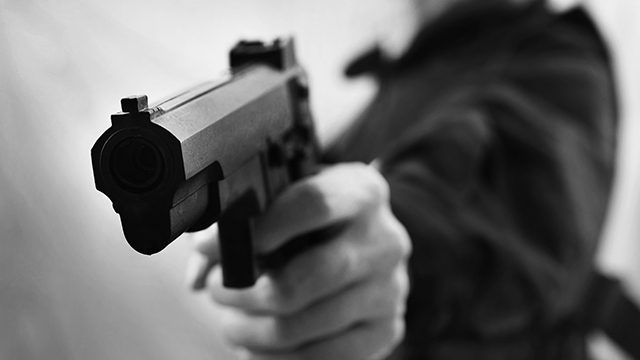 NOT ALLOWED. File photo of a gun.

Facebook Twitter Copy URL
Copied
'[D]o not shame [the Tausug] because he is prepared to kill and die for his dignity,' says Philippine Center for Islam and Democracy convenor Mehol Sadain

Cultural differences and insensitivity may have factored in the shooting deaths of provincial police director Colonel Michael Bawayan Jr. and his subordinate Staff Sergeant Imran Jilah in Sulu province, a history and political science professor from Western Mindanao said on Saturday, August 7.

Both men were pronounced dead at a local hospital shortly after the staff sergeant shot his superior at close range, and was gunned down in turn by the colonel’s aides at a quarantine checkpoint in Barangay Asturias, Jolo, at around 4:20 pm on Friday.

Western Mindanao State University (WMSU) professor Henry Solomon said there may be more to the incident than meets the eye – that it wasn’t just a case of insubordination and instilling discipline.

For some Tausugs, according to Solomon, some conflicts are about “martabbat” (dignity and honor).

“(It’s) not about disrespect toward a superior officer, disobeying the police code of ethics, policies, and organizational leadership and chain of command, but a case of mishandling a non-officer of the PNP, if the intention was to inculcate the right discipline and boost the morale of the members of the organization,” Solomon said.

Initial reports said Jilah pulled a gun and shot Bawayan after the latter called him out at a checkpoint inspection, pointing out Jilah’s untidy hair and trying to cut some of it with a pair of scissors.

Philippine Center for Islam and Democracy convenor Mehol Sadain said, “The Tausug (recognizes) authority, and has a high respect for authority, from the time of the Sultanate to the present secular governance. But do not shame him because he is prepared to kill and die for his dignity.”

Thoney Jacoba, supervising tourism operations officer of Parang town, Sulu, said Jilah had “reached his boiling point” because he felt that his self-respect had been trampled on.

Jacoba said, “No ethnicity, no gender, can define what a human can do when one’s self- dignity is crushed.”

Police said it was not the first time that Bawayan had confronted Jilah.

There was talk among Tausug circles of an earlier incident, in which the staff sergeant was slapped and kicked as soon as he turned his back on his superior officer, an allegation that could not be independently verified as of this posting.

Sulu police has kept mum on the allegations and only said that an investigation was ongoing. However, several personnel from the command attended Jilah’s Saturday funeral dressed in civilian clothes instead of their uniform, which could be construed as a jab at authority.

Professor Solomon said there were better ways of instilling discipline among police officers, and that the confrontational approach could have been avoided. Superior officers, he suggested, should check on attendance, uniforms, firearms, haircuts, nails, and the like during regular formations instead.

“This must be the proper way to do it, instead of cutting the hair of the policeman while on duty,” Solomon said.

“It is very unfortunate,” Sulu Governor Abdusakur Tan said of the incident.

He called Bawayan a “fine officer who was performing his duty at that time to ensure that everything was in order.”

Tan recalled that when Bawayan paid him a courtesy call after the colonel assumed the role of Sulu’s police director in March 2020, he emphatically told the police official that he wanted him to “maintain discipline and professionalism in the ranks” of the province’s police force.

Tan said he also told Bawayan to put a premium on “good appearance” because he was convinced this was a big factor in gaining the respect of citizens.

Tan said Bawayan’s way of disciplining his subordinates was part of police culture.

He said the objective was to make the Sulu police at par with other police commands elsewhere in terms of discipline, behavior, and appearance. – Rappler.com