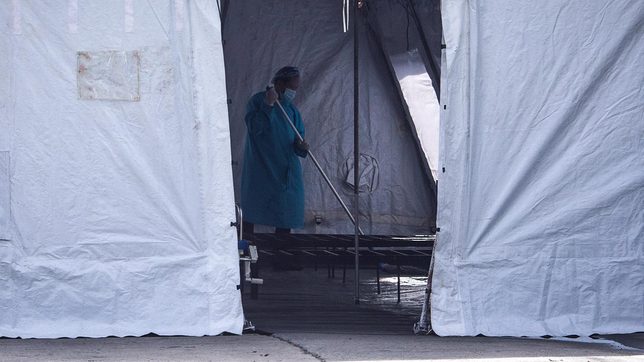 PREPARE. A newly installed isolation tent is seen along the Service Road in Batasan outside the Maclang Bautista General Hospital in Quezon City on Tuesday March 16, 2021.

Facebook Twitter Copy URL
Copied
At the center of the Philippines’ outbreak, 21 hospitals also reach ‘critical’ threshold for occupancy while another 27 are ‘high-risk’ with at least 70% of beds occupied

Six in 10 beds in Metro Manila’s intensive care units (ICU) are now filled up as coronavirus cases continue to surge in the region – a situation a health official described as “alarming.”

Based on the latest figures from the Department of Health (DOH) on Tuesday, March 16, 64.5% or 478 of 740 ICU beds in virus epicenter Metro Manila are occupied, compared to 50% earlier in the month.

The rise in ICU admissions comes as experts warned that Metro Manila was now seeing a “serious” surge in cases and as hospitals reported an increasing number of patients needing treatment in recent weeks.

In a briefing on Thursday, Health Undersecretary Leopoldo Vega described the 64.5% occupancy in ICUs in Metro Manila as “alarming” and cited the need to increase capacity once more.

“It’s moderate risk already – that’s alarming. We can be very comfortable if its low-risk…. We have to do the appropriate response in terms of capacitating hospitals whether public or private,” Vega said.

Compared to the last surge in 2020, however, Vega said the health system was in a “better off position” as health workers were more knowledgeable on how to treat and manage patients, while facilities had been beefed up since the last surge.

The command system was first put in place from July to August 2020 – the last time the Philippines faced a deadly surge in cases.

As infections continued to soar, the DOH said that the number of ill patients was back at the same peak level the Philippines saw in July 2020, when a surge in cases had threatened to cripple the health system.

The Philippines has been reporting around 4,000 cases in the past days, even hitting 5,404 new infections on Monday, March 15 – the 4th highest single-day tally in the country since the pandemic began. It again breached 5,000 on Thursday, March 18, when the DOH reported 5,290 new cases.

This is higher than the figures on March 6, when  115 were then considered to be in the “safe” zone,  11 were under “moderate” classification, 19 “high-risk” (70% to 85% occupancy), and 4 “critical.” (READ: Metro Manila hospitals feel rising COVID-19 cases in increased admissions) Not all hospitals have an ICU due to the level of training needed for health workers serving the unit. Only 75 or half of the 150 hospitals in Metro Manila have ICUs. This means that when an ICU is at full capacity, patients who need this type of care may end up waiting elsewhere such as at the emergency room.

When ICUs are stretched to their limit, hospitals may also need to scale back elective procedures or surgeries.

During the Philippines’ last peak in cases last year, ICU occupancy in Metro Manila reached 79% on August 5, 2020 – the highest to date. – Rappler.com