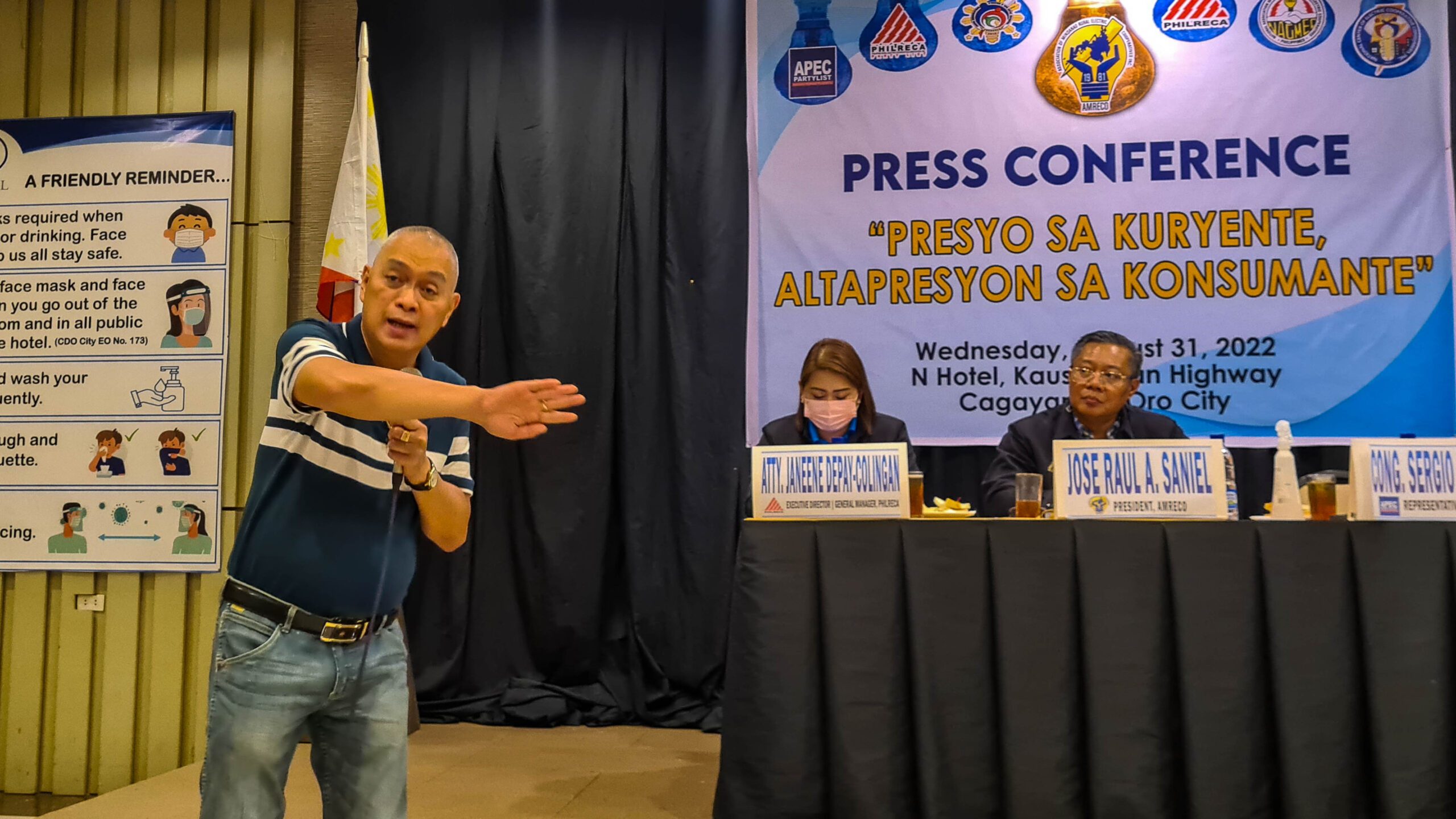 MAKING A POINT. Association of Philippine Electric Cooperatives party-list Representative Sergio Dagooc gestures as he hammers a point on why the Electric Power Industry Reform Act needs to be amended.

As much as 64% of Mindanao consumers’ monthly electricity expenses goes to independent power producers (IPPs), and the collectors get all the blame, said the Association of Mindanao Electric Cooperatives (Amreco) on Wednesday, August 31.

Amreco, a coalition of 34 electric cooperatives, warned of more increases in electricity rates in Mindanao because of the rising costs of coal fuel aggravated by Russia’s invasion of Ukraine.

Coal is used by most IPPs to run power plants that generate electricity in Mindanao.

“In the last few weeks, we have been experiencing big spikes in the costs of electricity. This is not just here in Mindanao but across the Philippines,” said Amreco president Jose Raul Saniel.

The problem, Saniel said, is that electric cooperatives were taking all the blame when all they do is merely distribute the power supply transmitted by the National Grid Corporation of the Philippines (NGCP), and collect from consumers.

“Why are we being blamed when we are just the collectors of the payments for different charges imposed by power suppliers, transmission operators, and government taxes?” Saniel asked.

He said much of the funds collected by power distributors end up with the IPPs.

Other than the rising fuel costs due to instability in the supply and the rising demand for coal vis a vis the lack of coal sources, the weakening of the peso has factored in the spiraling power costs, said Janeene Depay-Colingan, general manager of the Philippine Rural Electric Cooperatives Association (Philreca).

“The Epira allows the power generation companies to pass these additional costs on to the consumers,” Colingan said.

Colingan said the only charge in the electric bill that goes to electric cooperatives is the Distribution Supply Metering (DSM).

The amount is fixed by law, regulated, and can be increased or decreased only after the approval of the Energy Regulatory Commission (ERC).

Colingan said the DSM rate has not changed since 2010.

Association of Philippine Electric Cooperatives (APEC) Representative Sergio Dagooc said it was time for the government to clip the powers of the IPPs to dictate electricity prices.

“To address the problem of increasing electricity rates, we must first understand the root cause. We have to amend Epira,” Dagooc said.

He said amendments were needed because of many loopholes in the 2001 law.

Dagooc said the ERC and Department of Energy should have a say in the policy direction of the power industry.

“The ERC should be given the power to intervene and set ceilings on energy generation costs. Right now, ERC has no power to set any ceiling,” Dagooc said. – Rappler.com