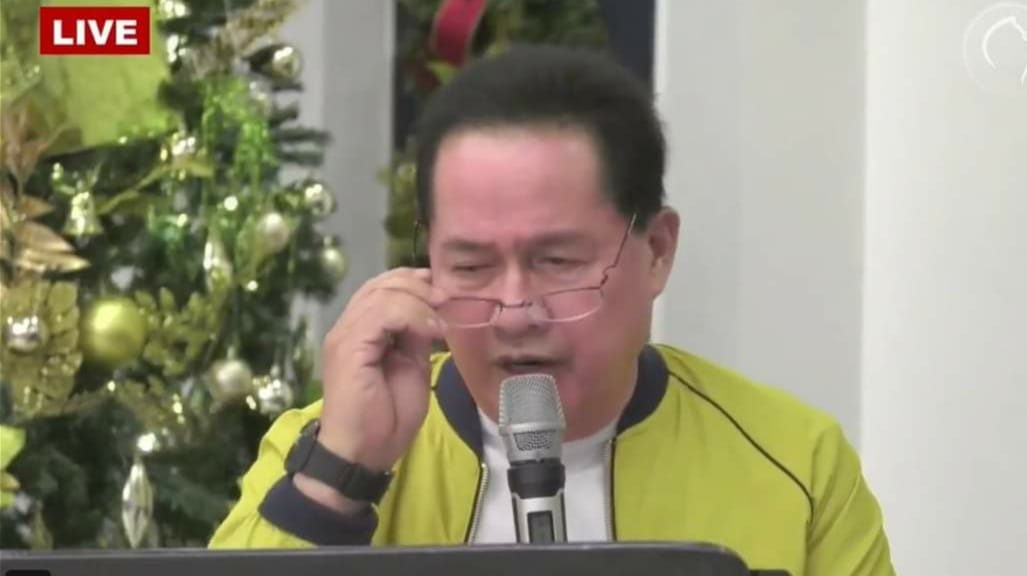 SINGING PREACHER. Controversial Kingdom of Jesus Christ Pastor Apollo Quiboloy puts on his glasses as he sings his blues away during a live stream on his church's Facebook page on Saturday night, December 10, after the US imposed sanctions on him for alleged human rights abuses.

Facebook Twitter Copy URL
Copied
Apollo Quiboloy says that to be in the center of a controversy against 'the most powerful nation on Earth' is a 'badge of honor.' A former follower calls his warnings about divine retribution 'ridiculous.'

CAGAYAN DE ORO, Philippines – Embattled doomsday preacher Apollo Quiboloy lashed out at the United States, accusing its government of violating his human rights even before a district court in Los Angeles, California could try him in connection with sex trafficking, money laundering, and a string of other cases.

Addressing his supporters online late Saturday night, December 10, Quiboloy said, “Whether God saves me or not, I will not bow down to injustice. I will not kneel down to anyone who causes injustice.”

Quiboloy said this after the US announced sanctions for him and several other people and entities in nine countries due to what American officials called corruption and human rights abuses. The Davao-based preacher’s pronouncement came hours after his lawyers took turns in criticizing the US and the Biden administration for prejudging him.

The sanctions include the blocking of Quiboloy’s assets and other interests in the US or by any entity owned by him, a ban on all transactions involving his interests unless authorized by the US government, and a ban on contribution or provision of funds, goods, or services that would benefit the preacher.

Quiboloy said it was a “badge of honor” for him to be in the center of a controversy, and face “the most powerful nation on Earth.”

He said American officials “already deemed me guilty even before any trial could come.”

Quiboloy and eight of his church associates had been scheduled to be tried in a Los Angeles court on March 21, 2023, but a judge ordered the trial date moved to March 19, 2024, to give the accused time to prepare for their defense, and avoid a miscarriage of justice based on a US law on speedy trials.

“Am I guilty? No. It’s my human rights that have been abused,” Quiboloy told his online followers.

The sanctions were announced in separate statements by the US Department of State and the US Department of Treasury on Friday and Saturday, December 9 and 10 respectively, based on Executive Order 13818 of December 20, 2017, about blocking the property of people involved in serious human rights abuse or corruption.

It was the US treasury department that designated Quiboloy “for his connection to serious human rights abuse.”

According to the two US departments, the founder of the Davao City-based Kingdom of Jesus Christ (KOJC) “took advantage of his leadership role within the KOJC to engage in a pattern of systemic and pervasive rape and other physical abuse involving minors as young as 11 years old from 2006 to at least 2020.”

An air of melancholy surrounded Quiboloy during the nearly one-hour live stream, but in between his discourse, he sang songs of hope and victory.

The following are excerpts from Quiboloy’s first song:

Quiboloy compared himself to biblical figures, including Jesus Christ who, he said, suffered but became victorious in the end.

“I will lay down my life and everything I worked for to fight injustice wherever, whatever it takes. I will pay the cost, but I will never, never kneel to injustice…. You can never take my faith in God,” he said.

He did not elaborate on how his legal problems in the US were related to his religion, or why he thought it was an attempt by anyone to take his faith away from him.

Quiboloy, known for his close ties to former president Rodrigo Duterte, is wanted by the US Federal Bureau of Investigation (FBI) not because of his faith, but because of a string of criminal cases which threaten to send him and his associates to jail for the rest of their lives.

One of those accused agreed to stand as a state witness against Quiboloy, et. al.

Thom Mrozek, the media relations director of the US Attorney’s Office Central District of California (Los Angeles), said Quiboloy never made an appearance in any of his criminal cases since he and his associates were indicted late last year.

Quiboloy and two of his co-accused are on the FBI’s publicized most wanted list.

Meanwhile, Quiboloy made another fantastic claim – that his spirit was supposedly brought to heaven where he was given a divine revelation, specifically in the 49th chapter of the Book of Isaiah.

The passages, which he read online, are accessible to anyone with a copy of the Old Testament.

“Remember, I am the appointed son [of God],” Quiboloy said as he warned again those who were “persecuting” him of punishment. He said this punishment would be similar to the biblical account on the destruction of Sodom and Gomorrah.

Quiboloy warned people about an impending divine judgment unless they changed their ways.

He compared himself to Lot – the biblical patriarch in the Book of Genesis narrative – a character also portrayed in the Bible as having offered his daughters to a Sodomite mob so they would spare visiting angels. Lot eventually had incestuous relations and impregnated his two daughters.

“I was sent to this world, spiritually, to save humanity from their sins, and from the destruction that would be coming as a judgment,” Quiboloy said.

It wasn’t the first time for Quiboloy to warn of divine retribution as an offshoot of his cases in the US.

In November 2021, after he was indicted, the pastor warned of flesh-eating bacteria that would turn people around the world like the walking dead.

He said the then-newly-discovered Omicron variant of COVID-19 was divine punishment, and the world would see worse because he was being “persecuted.”

Former KOJC worker Arlene Caminong-Stone laughed off Quiboloy’s warning of divine retribution, saying it didn’t have a bearing on the US government’s position against those in its list of abusers, and the cases against him.

“I think he’s just trying to hold on by projecting to his followers that he is okay when, truth is, he is not. These ridiculous warnings about divine punishment are part of his pattern. They don’t mean a thing to the US or anyone outside his group,” Stone told Rappler on Tuesday, December 13.

She also criticized what she said was Quiboloy’s attempt to make his legal problems look like religious repression.

“Who’s trying to take his faith away from him? No one. His premise is flawed. His cases are not about his religion, but about sexual abuse, human trafficking, and money laundering, among others,” Stone said.

Stone said: “When he loses something or is in a disadvantageous position, he cries injustice. But what about those who complained, the victims? The problem is that he thinks he gets to decide what is injustice and what is not.” – Rappler.com